Game of the Day: Opening Day 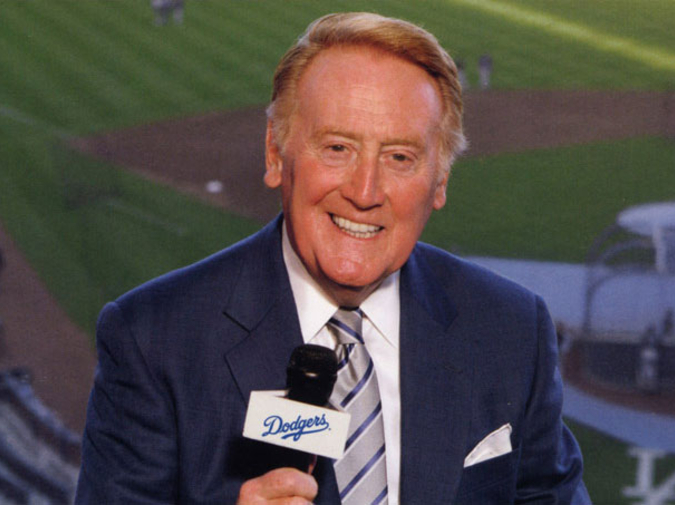 It’s opening day of the regular season and I wake up to sudden onset twenty-four hour flu and email the boss to regretfully declare myself unable to come into work. I fry a couple eggs, dip the peppered bacon into the yolky flavor pillows, and then walk the dog to the liquor store. I get a six-pack for the dog and a whiskey for me. Today is a day for early drinking and ace pitchers. Opening Day - the day on which everyone is undefeated.

I break down my own front door, pour some pilsner in a bowl and some Irish in a mug and settle in to listen to Vin Scully call the Dodgers.

If you’re not a baseball fan, you might not have heard of Vin Scully, but you’ve undoubtedly heard his voice. He’s eighty-seven years old, and he’s been calling Dodgers games for sixty-six of them, since before the team moved from Brooklyn to LA. He works alone and narrates with an economy most prose writers would kill for. He was once married to Joan Crawford. When he dies, every stadium will go dark and collapse into the ground like the house at the end of Carrie. Vin fucking Scully.

“Hi everybody, and a very pleasant good afternoon to you, wherever you might be.” I picture him up in his booth, an old man doing a job he’s had for longer than a lot of men live. I think of him alone, and me alone, opposite ends of a broadcast, separated by over 1500 miles and fifty-seven years, and I feel something like vertigo. It’s like looking down the edge of a lifetime and feeling it draw you off the ledge before you’re ready. The dog burps. I drink whiskey.

Scully announces the 55,000 in attendance at Chavez Ravine, land stolen out from under migrant workers so that white folks could watch baseball and have room to park their cars. The PA speakers blast warmup songs - We are young / so let’s set the world on fire - and Vin takes a minute to mark the passing of Dodgers traveling secretary Billy Drury. You mourn a hell of a lot of friends in eighty-seven years, I imagine.

Clayton Kershaw is on the mound, the Dodgers’ modern-day Sandy Koufax. He throws a devastating curveball, affectionately dubbed “Uncle Charlie” and “Public Enemy Number One” by Scully. He throws it twice in a row to Derek Norris, whose face glistens with tears when the second drops in for strike three. “Most of baseball is failure,” I say to the dog, but the dog is wild on beer and wanders its own ontological planes.

Matt Kemp comes up to bat, his first return to Dodger Stadium after being traded away in the offseason, and Scully tells the story of Casey Stengel’s Dodgers homecoming, some ninety-odd years prior. With boos raining down on him from his former fans, Stengel walked  onto the field and doffed his cap, a sparrow flying out from under it and fluttering up and out of the stadium.

Wil Myers steals a base. Later on, another base will be stolen and Vin will describe it as “a treat.” And I know that he means that stolen bases are relatively uncommon in today’s game, but I also suspect he means that the unexpected is a gift not to be taken for granted.

Clint Barmes bats and Scully notes that he once injured himself dragging deer meat through a forest.

James Shields lets fly a high, tight fastball and Scully tells of how Shields grew up, one of three boys in an overworked family. He talks about how their mother caught the boys in the backyard, how she did this until it was physically impossible, when the velocity with which they threw eventually overwhelmed her. This occurred at age eight in James’ case. It’s a thirty-second anecdote, but it evokes so much. There’s Mom, giving up her tired hours for the boys. There’s the sunlight fading, the ball’s flight harder to pick out. There are the boys getting too strong too soon, outgrowing the mom’s ability to block a ball in the dirt. And just as you are processing all this, Juan Uribe bounces one to the shortstop and gets thrown out and Scully takes us to commercial and is afforded a few minutes to rest his voice.

The game continues, and the dog and I continue our drinking. Kershaw murders Shields with a curveball, cuts Wil Myers’ neck with a changeup, and gets a grounder from Kemp to end the inning. As the innings wear on, Scully’s voice seems to get younger, a pump fully primed. He tells us that San Diego alone carries the distinction of never having had a pitcher throw a no-hitter or a batter hit for the cycle. With the right kind of ears, you might catch the pathos in his tone and hear the way he yearns to see the rival Padres break out of that ignominy, imagine that he might want to be there to call it. The Dodgers offense is quiet through three innings, a “low murmur of protest.”

In Scully’s world, we all come from somewhere. “You all know the story of Yonder Alonso,” he begins, “Born in Havana, Cuba.” And so as Yonder walks up and adjusts his batting gloves, I learn that his mother invented the name Yonder. As he watches ball one drop low, I learn that it wasn’t until years later, playing in the US, that he found out the American meaning. “You have to figure, for a powerful young hitter, a name like ‘Yonder’ is pretty okay,” cracks Scully. “The next pitch is in for a strike and the count is 0-2.”

Everyone comes from a place; everyone has a story. This is day one of the Intro to Vin Scully course being taught at the college in my head. Day two focuses on “Let the moment breathe.” In the bottom of the fourth, Adrian Gonzalez will blast a deep home run, and as the ball’s shadow flickers over the faces of the right field fanatics, Scully says “The Dodgers tie it up,” and then falls silent. And stays silent, as the crowd’s cheers rise up like excited static. And stays silent still as Gonzalez crosses the plate and is swallowed up by his teammates’ high fives.

This is part of the thrill of watching a game with Vin Scully. It’s like reading expert prose. You can focus in or out on the narration. It doesn’t intrude, but finds uncanny ways of expressing the familiar. When rookie Joc Pederson comes up to bat with a chance at his first Major League RBI, it’s “butterfly time.” When he pops up to end the inning, he’s “gone to school.” Later Yasiel Puig will crack a single that sounds “like he hit it with a stalk of celery.” Scully dabbles in meta-narration as he ad libs a nickname for pitcher Yimi Garcia: “Y-I-M-I… Yumpin’  Yimi, perhaps… Or a reasonable facsimile thereof.” When infielder Clint Barmes gets a quick tag down on the legs of a hard-sliding Puig, he’s “putting his hands right into the machinery.”

I learn things listening to Scully. Today I learn that Ted Williams never went hitless on an opening day. We reflect on how the “foul pole” is “the greatest misnomer in baseball,” since the poles themselves are fair territory. There’s something lovely in the idea of one old man sitting up in his booth for sixty-six years calling a ball game better than anyone has ever called it. There’s one phrase Vin will use repeatedly, as if unconsciously, like a tic. “Be-yu-ti-ful day,” he says, as if in awe. I’ve learned that, despite everything, sometimes that can be enough. The Dodgers win 6-3 and the dog and I go for a nice drunk walk before the sun goes down and leaves us sleepy.