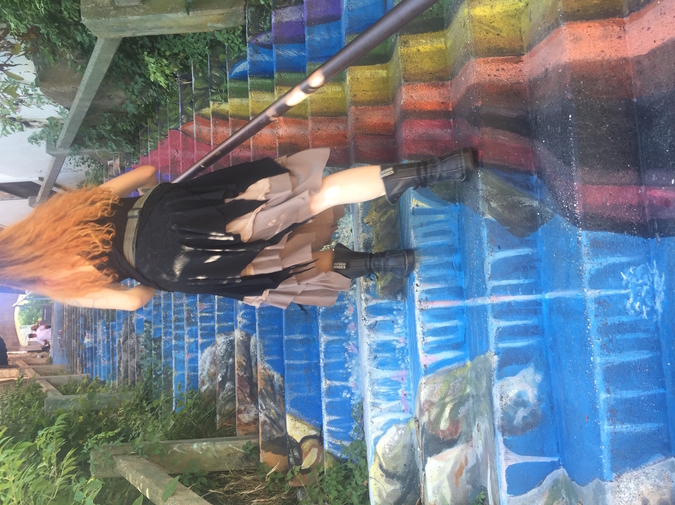 The best part about puking on the sidewalk is everyone thinks you’re wasted. Drunk or dopesick, doesn’t matter, if you’re on the sidewalk and vomiting, the assumption is you’re a fuckup but probably a fun person.

I hadn’t ingested anything fun. I was just having a panic attack.

I lay on the sidewalk outside the club, my forearms flush against the ground, the cement making little red indentations in my skin. I’d managed not to land in my own vomit, which felt like a victory.

Nobody was around except a bouncer, who said, “You can’t lie there.”

I couldn’t answer him because even as the physical expulsion stopped, the psychological vomit just kept coming, like how I shouldn’t have broken up with James, he was so nice and I didn’t deserve anyone nice and definitely no one else would ever love me, not that I really wanted that kind of pressure, and what if James never stopped sending me suicidal emails and this is why I can’t have nice things, I mean this is why I can’t have nice people in my life, not to mention there was no money because I’d really demolished my bank account in that move and my job didn’t pay enough and it’s not like my family had money to give me and I’d have to go back on the job market even though how could I possibly perform in a job interview without vomiting out my entire stomach? This feeling was forever and I couldn’t talk to my friends because it was after midnight on the weekend which meant they were all blackout drunk and part of me still really wanted them to think I was fun, even though it didn’t matter what anyone thought of me because I was going to die on this sidewalk and then I’d be dead but what if I couldn't die, what if I had to go on living and actually feel this way forever and if I wanted to go to the hospital right now or even if I just wanted someone to walk me home there was no one, I mean no one, who would take me.

It was all I could do to lift my head and make eye contact with him. He was a huge pair of arms that happened to have a head attached. Pushing myself up, I scooted away from the neighbor's door and leaned against the club's brick wall. The bouncer nodded before training his gaze back on the street.

After a while, he asked, “You okay?” He’d suddenly remembered what you were supposed to say when a girl ate pavement in front of you.

I wanted to be home in my bed almost as much as I never wanted to move again. So I heaved upward, teeth chattering despite the warm fall night, and brushed myself off. A few flecks of vomit crusted in my hair, but my hair’s sort of vomit-colored anyway.

My friends didn’t need to know I was leaving. They’ve always been better at partying than me. And I don’t think they ever pretend to have fun—they seem to be genuinely doing it, every time.

I turned away from the club. “Have a good night,” the bouncer called after me. I scratched to show I hadn’t heard him.

Walking home, I checked out everybody on the street—people smoking on curbsides, making out on corners, buying tacos from trucks, carrying each other between bars, and always, always, always laughing, like they’d really figured it out, like they knew the thing, whatever it was, whatever thing made them feel okay about being alive.

I kept peering down alleyways because that was where the vomiting people usually hung out, and seeing them made me feel a little less alone. But then I glanced down one alley and instead of a figure hunched over a trash can or somebody sleeping, I found myself staring right into a pair of deep-set, bright red, bloodshot eyes.

The man attached to them took a drag from a cigarette, smoke haloing his face with aggressive melodrama. His half-assed early Beatles haircut wasn’t attractive so much as twee, and didn’t match the disheveled aesthetic of the stubble along his jawline but—he did have a nice jawline. More importantly, tobacco always smells like the last time I felt safe, and suddenly I wanted a cigarette more than I wanted to be home in bed.

When I asked, he pulled a pack of Marlboro Reds from his back pocket and gave me one. We got to talking, and I don’t know how it happened, but he started telling me about his childhood. Real bad shit—flames, brimstone, a father who put cigarettes out on his arms and back. He lifted his shirt and showed me the soft, cigarette-sized circles along his shoulder blades. I don’t know why he started talking about that, but I know why I stayed to listen. Being confided in makes me feel good. Especially by people who have no reason to trust me. Especially by people I don’t trust at all.

After our second smoke, he reached a hand behind my neck, curving his index finger and thumb across my cervical vertebrae, and kissed me. I was so startled that I kissed him back. I was surprised he didn’t care that I tasted like vomit, because I definitely did—I could feel it on my tongue. He tasted like tobacco, but with an undertone of iron, like when you get a nosebleed and blood sneaks into your mouth.

Hand still around my neck, he removed his face from mine and said, “Come upstairs. We’ll have fun.” He sounded so certain.

When you panic, adrenaline rushes through your body, prepping you for fight or flight, but I hadn’t run anywhere or fought anyone, so I got all that epinephrine for nothing. Attacks are physically exhausting, and I wanted so badly to be in the vicinity of a bed. The shakes had stopped while I was kissing him, and the heat behind my eyelids faded when I heard him talk. I thought, if I’m going to get murdered, it might as well be tonight. I went upstairs with him because I was tired or because he had a nice jawline or because I knew that while sex would quell my anxiety, so would death.

The worst part about panic attacks is how unexpectedly they hit. I’ll be somewhere, having fun or faking it, and then I start to feel it in my belly, then coming up my throat. The shakes, the nausea, the heat.

The best part about panic attacks, though, is the way they focus my desire. Even as a shitstorm of microscopic anxieties bears down on me, the individual significance of anything starts to seem ridiculous, because all I want in those moments is to stop thinking entirely. Sex is the best cure for my anxiety because anything that isn’t physical ceases to exist. It’s the purest form of dissolution.

Upstairs, we walked into a studio so dark I couldn’t make out much besides a couch in the center of the room and a bed in the corner. The bed happened quickly, and then I didn’t mind about anything else. We fucked a few times, and I don’t need to tell you more about that. You know what sex is. After, he made me a cup of burned coffee in a mug that said CHICAGO.

I moved to the couch, perching naked on the middle seat, curling my legs to my chest and wedging the mug between my knees. He turned on a light in the kitchenette, brightening the place enough that I could see how spare it really was. Nothing on the walls and no real space for furniture—the couch, the bed, a desk in one corner with a pile of books beneath.

He removed a wad of fabric from under the bed, pulling on boxers and an Anthrax t-shirt. I winced at the Anthrax logo—I knew better than to fuck guys into thrash metal—too late now. I’d leave as soon as I finished my coffee, but it was so bitter that I had to drink slowly. Watching me over the rim of his mug, he said, “You still have your soul, right?”

I raised my eyebrows. Never fuck guys into thrash metal. “I don’t think I ever had one,” I said.

He laughed. “That means you still do.”

He moved to the desk and starting rifling through drawers. “Listen, it would really help me out if you could sign this thing. It’s like a petition, only instead of donating money, you donate your immortal soul. And until you die, your life gets awesome.” He yanked a stack of papers from the center drawer, straightened up and looked me in the eye. “And you have to sign in blood. I know how that sounds, but will you at least check it out?”

I rested my coffee on one knee while I flipped through the pages. It seemed like a standard contract: tiny lettering, narrow margins, legalese. I had a hard time focusing on the specifics because so many of those specifics focused on the afterlife, in which I didn’t believe and wasn’t particularly interested.

He reached behind his back and grabbed a steak knife from the magnetized strip on the wall. Pinching the blade, he held it out handle-first. “That’s basic bitch shit,” he said. “That’s easy.”

This was, hands down, the dumbest post-coital conversation I’d ever had. But still, I accepted the knife and said, “Well, that sounds okay.”

He poked the contract in my lap, its cool pages shifting across my thighs. “Sign, then.”

Two dotted lines on the last page: bearer beneath the first, broker beneath the second. I pricked my finger, squeezed, dipped a pen in my fluids, signed. My signature rose dramatically from the pools of blood like sea serpents half-submerged on medieval maps.

Taking the contract, he flexed the sheaf so blood didn’t drip on the couch, then signed his name—whatever it was—on the broker line. “Congratulations,” he said, “your soul is forfeit.”

He bent over the side of the couch, kissed me. “You should go now.”

I wanted to say “see you in hell,” but it felt too obvious.

The temperature had dropped a few degrees since I was last outside, and even though I should have been cold, it was a relief. I scanned myself for panic and came back clear. There was nothing left to give me anxiety, because I’d done the worst thing already. As soon as I let my soul off its tight little leash, my whole body brightened up. It was dark, but I felt like all the light in the world, all the brightness from the moon and the stars and street lamps and smartphone screens, all of it was actually coming from me.

Deirdre Coyle is a writer, fashion librarian, and non-practicing mermaid living in Brooklyn. Her work can be found in Lit Hub, Hello Giggles, Luna Luna Magazine, Cheap Pop, Goddessmode, and elsewhere. She likes talking about goth stuff at @DeirdreKoala.