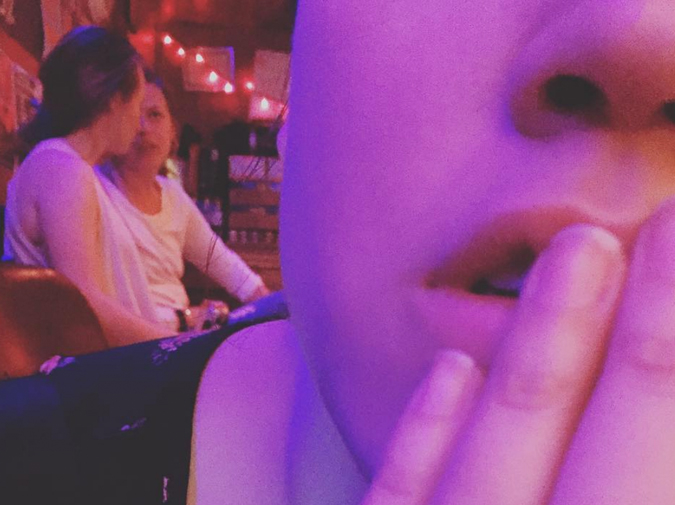 When you fuck do you ever think of the first time,
how you had to turn the lights off and your dress hit the floor
like a new stain and you had to hold yourself back
from getting to your knees to tend the carpet. How you got under the covers
even though it was July, and how sweat was not yet
sexy, it was just sweat, and your job was to be pushed into
and for most of it your eyes were closed
and even though you’d wanted it and wanted him, all night
you hadn’t known if the kiss was coming. Can you
imagine what you imagined then? That love would be
all white dress shirts in bright doorways. Now, that sounds like
ghosts, but then it sounded like dirty weekends and spring temperatures.
Where did you learn about fucking? Mum and dad gave you a book
and then you watched dragonflies over water, in flight and
attached (the first time attachment was worrying) and after that,
porn on dial up. Two lifeguards buffering
beside a turquoise pool. The frantic movement of the first time
turns out more like stuttering than buffering. Like a paused VHS tape
maybe, or a scratched record. How far back do we have to go?
It’s like the first first time, two people in a cave
finding the darkest corner to lie down in and the bones of her back
pounding the gravel, or Adam and Eve
bored after a day or two of perfection, like, what do we do
with these bits and oh this hurts and is this wetness
good or bad (see: the water imagery…) until they learned to love
the taste of salt and the way teeth leave flowers on the skin
and Eve began holding Adam down, learned she liked
to push his face into the ever-dewey grass while he gasped.
And maybe what’s really happening, is this is the only part of the story
you know, and so every time you try to do it better.
Try to rescrew the screw. Push his head into the pillow.
Show yourself you know what the fuck you’re doing
that all the practice was worth it. The stains have all set
and the flowers are blooming yellow, and you want to show
the first you, want to say, hey, this is how you like it,
save time, flip him on top of the duvet cover
(blue checkered, cotton), taste the sweat now.

At the farmers’ market one Sunday morning
she hands me a bouquet of small tornadoes
and because no one has ever given me tornadoes like this before
I am embarrassed. I say Thank you I say, Will they need water?
The tornadoes are like tangled bedsheets, like roots
deep under the earth, knotweed maybe,
which is everywhere. She tells me to let them eat,
that eating is what tornadoes do,
she tells me to start them small, with olives maybe,
or shelled peanuts, and move on to bigger things later.
The tornadoes love to play with their tissue
paper wrapping, and I can feel their breath on my face
when I lean down to sniff the new-beginnings smell
of a strong gust. The tornadoes rattle
the vase I place them in, they swallow hungrily, they suck
my feeding fingers like they are kissing my prints,
like they recognise me, know its me that nourishes them.
Knotweed is named after feminine parts: Fallopia Japonica.
This is a thing in me I never feel, but I know
is there. I don’t know whether it is insult or respect, this choice of name
it says, we will tie you up and strangle you all
so I suppose it depends who is reading
the encyclopedia of flora. The tornadoes have no roots, yet they grow,
upwards and she slips her hand
up my shirt as she says What’s in the fridge? They’re hungry.
and the tornadoes lick paint off the ceiling
and yellowed plaster shows itself in ‘O’s around calm white
centres. The tornadoes guzzle raw steak, they swallow
pints and pints of milk. She says, They want the whole cow
and a foam comes off them, a body-deep pink.
I can’t keep my eyes, my ears, from the tornadoes
as we fuck. Their noise is like want. Their noise is like please.
Their noise is bigger than the rooms of my apartment.
And I suppose I begin to be afraid, but
she tells me, No, You don’t understand, We’re going to watch them eat
this whole one-horse town. And although one horse town
is a phrase I’ve never heard used in real life before,
and shows a flair for drama, I follow her,
I stand back with her, we watch the world as it is ripped
open and laid bare, watch as it quivers before us,
dirt under its tongue, and under the dirt
all those roots.

We start with this joke, that in any given room there’s someone
one or both of us has fucked. This is almost true here

and at first we point them out, but our pointing fingers
get tired, so tired we feel headachey and a little jealous.

We stop pointing. We draw ‘x’s across our nipples, because they are treasure
and you stab the lid of a mason jar,

we are going to save our coins for a move. I’ve got to get out
but I have no sense of direction. I blame Google Maps,

you blame poetry. You tell me I have both in my pocket, but only one helps us at all.
I am pouring myself everywhere but never fitting. I can’t stay straight. It’s cute in the bath

but not in the street. I guess I should have seen this coming.
When you take our savings to the bank they total

five dollars forty-five. Not even enough for a bottle
of brown liquor. The thing is, in any given room here there’s someone

I know you do already. It’s the geometry of this small town
and of the way you and I cross, perpendicular

when what we need is to be parallel, or maybe to intersect
at multiple points. If we knew anything about maths maybe

we would save more money, or I would be able to control
the angles at which I fall. But how things are - we’re all just

lines, crossing at random on various planes. You always wanted me
to write poems about you, and I guess now I am. We end with this joke

that in any given room there is someone one or both of us has fucked, and you want that
to stop, and I can’t stop it, and anyway, we may well be in different rooms entirely.

Two separate friends have shown
me The Ecstasy of St Teresa
recently. Their readings on Bernini differed,
one using two fingers
to zoom in on her face and the fold
of her robes
observing how, lost like that,
she represents the infinite
in as much as we can ever touch
the infinite; in dreams and in
stone made soft and in how long stone lasts.
The other pointed out that her perfect
spread toes are the perfect spread toes
of orgasm, which comparatively might
seem crass, but orgasm is also an attempt at
a few seconds of infinity, an attempt to more
than just exist. He says I’ve always liked
this bit on a girl,
his tongue touches
the fold of my knee-pit,
and I can feel the saints above us–
Basil with his fingers almost touching as if he has
something to say but can’t quite find
the words, though maybe if we give him
enough time he’ll deliver.

When we’re done and back to our hangovers
the boy stands and looks for his pants,
says, I like the icon paintings.
I didn’t put them up there to watch over me,
but now I suppose they have no choice
and I like how they remind me of better places
where even religion is beautiful,
steeped in blood and gold leaf.
Last night he told me
about his Baptist upbringing.
How he has only recently stopped being afraid
of everything. He told me about architecture;
how he likes circles, how he likes poured
concrete but also Borromini. He told me,
Architects love things that seem impossible
and I told him that actually sounds pretty
brave, and maybe that is where
infinity is hiding—

in the almost impossibleness of art.
For example in a poem,
when meaning blooms
in the crack of light between two lines
like moss on old rock,
or in the scalding blue of those monasteries
in Montenegro, where I dropped money into
an honesty box and sometimes palmed two
gold-haloed saints, and people walked in straight lines
down carpet worn flat and black
to kiss the forehead or toes of Jesus,
Mary and Joseph. He kisses my shins,
though we are far from religious reverie,
and on the wall above us St Basil remains stern in almost-prayer,
his palms never touching, the space between them
reminding me that no skin ever really touches any other skin,
that atoms are only ever almost pressed together
infinitely close but always apart.

Lotte Mitchell Reford is a British poet currently living in Blacksburg, Virginia, where she is an MFA candidate in poetry at Virginia Tech. She has previously worked as managing editor for Glasgow-based literary journal From Glasgow to Saturn, and as editorial and production manager for Luath Press, Edinburgh. She has had poetry, fiction and nonfiction published in, The Cadaverine, Far Off Places and Miso Magazine, and has poetry upcoming in SPAM and The Moth.