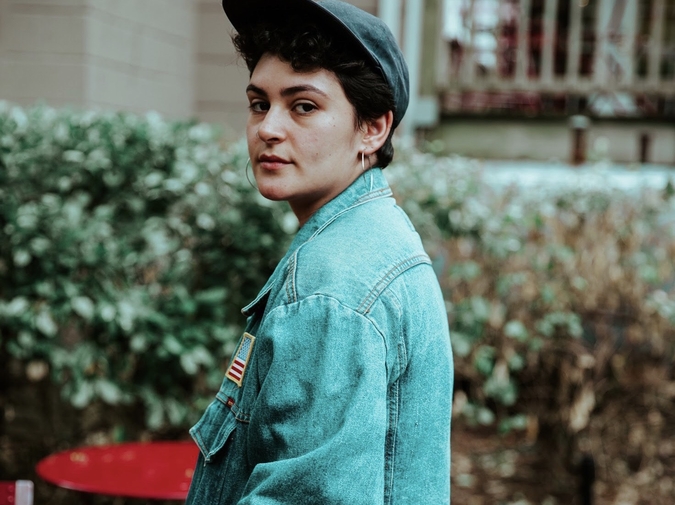 My friends and I would see you on the streets and say you looked like a villain. Slicked back black hair, tall and thin, distrusting gaze, but handsome. All sinister swagger. One time that I wasn’t there for but heard about, you got jumped by a group of guys, probably over the blow. They threw you in the street in the middle of the day and gave you a good beating. My friend was working at the restaurant next door and she told me about it. One guy took your Air Force Ones and threw them as far as he could. Just to take your shoes. Just to fuck with you. When it was over you were just lying in the street while drivers laid on their horns, swerved cars to  get around you. The cook from the restaurant who is older and knows everyone and everything that goes on came out and, per my friend’s description, grabbed you by the lobe of your ear like a surly little boy in a cartoon, and pulled you inside. He gave you a bag of frozen peas to put on your eye and yelled at you in Spanish bullets no one else could understand. Like I said, I wasn’t there— but did I get it right, E?

One night soon after coked up we fuck in the bathroom of that bar where they don’t card and haven’t since we were sixteen. We’re older now, now they don’t need to ID because every bouncer knows us by name and you sell them all this same cocaine to stay awake. Honestly, I wasn’t looking to fuck but I agreed to, which maybe is the same to you. I wasn’t planning to do any of this, wasn’t even planning on moving back to this brickdust town, but here in the dark bar with no plans when you bring a finger to the tip of your nose then, beckoning with a tilt of your jaw, invite me back to the single stall, it’d be rude to say no.

First things first, we do some coke, then you grab my whole face and sloppy-kiss it, drunk and overeager or maybe just high. It's so desperate and messy it feels like we’re teenagers again, doing this tongue-to-tongue kissing thing for the first time. Then you’re kissing my neck, then you turn me around and rip my pants down like it’s nothing because it is. A few hungry thrusts, then a pounding on the door. Someone’s waiting to do what we’re doing. You kick the door, yell just a fucking minute! but we still stop, at least for now, just do a bit more coke and head out, meeting the eyes of every person in the bathroom line as we do.

This isn't me but it’s the girl I can be sometimes. She doesn’t stop there. She invites you over to her apartment. She lives alone in a nice place not far from here. That night she could have died for you, as in, I could have died with you because somehow we drove home and I don’t remember and neither did you. There’s a way to romanticize that blind confidence, or maybe we were just high. You’re such a charmer, E, the kind that makes people around you feel safe, or at least indestructible.

At my place, we sit on the couch, do coke on the couch, fuck on the couch, go to the bed, fuck on the bed, do coke on the bed, get in the shower, fuck in the shower, get back in the bed. At 6am the coke bag empties, the sun comes up and glares at us through the blinds. Twenty minutes later, still naked and sex-flushed, you’re crying about your dead brother. Your dead brother, the eldest, an alcoholic, found in an alley where no one could save him, or even wanted to. Alone. You are crying naked coked up in my bed and you call me beautiful, and you say no, you really are, and maybe you are just high, or maybe something in you might even mean it. We sleep a few hours, wake up to the staccato beep of your watch alarm. 10am. I hadn’t noticed the watch before. It feels militaristic, or juvenile.  You get up, feign some polite excuse to leave, something I don’t need to hear.

In the not-yet hungover not-yet slept frenzy of leaving you pick around the piles of laundry on the floor for your clothes. Your hair in half-baked tresses, hair gel half-rinsed out in our shower, half-pulled out in the grip between my fingers when we’re fucking. You reach for a crumple of fabric on the ground and pull it over your legs. You are accidentally standing in a black lace thong. I could not make this up. There is something so absurd, so absurdly human, about this cocaine smooth-acting man, who this same morning made little me be the big spoon, putting my underwear on by mistake. This masculine man rendered in lace, made muse in the harshness of daylight. You laugh, I laugh. You step out of my underwear, find your clothes. You kiss me, I tell you you can stop pretending, you leave. I don’t get out of bed. You leave the baggie of coke on the coffee table like a token to remember you by, but you’re more than the drugs, aren’t you? We’ve walked the same crumbly coastal streets, the same windowless school halls all our lives. So maybe you’re not all villain— but who are you, E?

Olivia Braley is a writer living in Maryland. She is a co-founder and Editor in Chief of Stone of Madness Press, and a Reader at Longleaf Review. Her chapbook, SOFTENING, is forthcoming through Emerge Literary Press in 2021. Keep up with her work on Twitter @OliviaBraley or at her website, oliviabraleywrites.com.