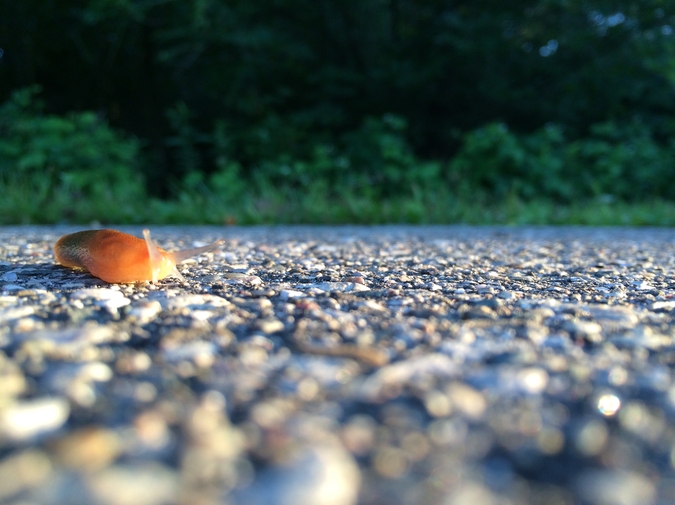 Five Mile Line was, as the name suggests, exactly five miles long. Five miles of oak trees and five miles of blackberry bushes that lined between two houses on opposite sides. Harold lived on the east side, where he spent his retirement as a beekeeper, and Sebastian had just moved into the house on the west, where unpacked boxes were stacked on the porch and in the garage.

“You again,” Harold said, before the two of them made a U-turn to run back home.

Sebastian stood on his front porch, eyed his watch after every prolonged stretch. He ran inside to take a quick sip of water to kill some time and started his jog.

“You have a family with you in that house?” Harold asked when the two crossed paths once again.

Their relationship, or what they had of one, grew and hinged on these four second conversations, and each day the two would pick up where they left off.

“So do you have a wife?” Sebastian asked him the next day.

“Been divorced twenty years,” Harold replied as he U-turned back towards his house. He jogged with a hunched back and wore white armbands to match his white headband. The way he moved his arms made it seem like he was running faster than he actually was, as if he were desperately trying to tap into his athletic youth.

“What about you, have anyone special?” Harold asked the next day.

“Just the cat for now.” Sebastian jogged backwards and gave a slight wave, meaning both  hello and goodbye.

“You should come over for dinner sometime,” Sebastian said the following day.

“Maybe. Sounds like a good idea, but I don’t know if I’ll ever be able to make it. ”

“Because I don’t have a car,” Harold explained the next day. “I’d have to run five miles there and five miles back, you know?”

Sebastian smiled, “Then one day we could have dinner right here in the middle of the street.” Harold laughed, coughed, and ran away.

“And is there no use in walking?” Sebastian asked early the next morning.

“Walking is no good,” explained Harold. “I love to run.” The old man pushed into a sprint back to his house

Harold started the conversation the next day. “Have any dreams? Any goals?”

“Maybe go back to school for a Master’s. Meet a girl,” Sebastian shrugged. “And I’ve always wanted to learn how to play piano.”

“I already lived the dream.” Harold winked, turned, and continued on his way.

“How so?” Sebastian wiped the sweat from his forehead.

“Oh,” Harold batted his hand at Sebastian, “you know.” Sebastian shook his head, rolled his eyes, and ran back home.

Harold woke up earlier than usual the next day and soaked in a hot bath to kill some time and rid the pain in his leg. Though there was always the option of taking the day off and getting the rest he both needed and deserved, he put on his workout clothes and idly walked around the kitchen, waiting for the clock to hit eight.

“Doctors say I need to cut down on my running. Say that all of this exercise is too much for a man my age. Can you believe that?”

“But I love to run. Screw em!” Harold shouted over his shoulder, already in a full sprint back to his house.

“What if you cut it down to three miles a day? You know, instead of five.”

“Well, then, we won’t be able to have our conversations.” Harold slowed down to a pensive power walk.

“Then I’ll just run a little bit extra!” Sebastian shouted over his shoulder.

Sebastian did the calculations in his head, and adjusted their schedule the following day. Harold ran one and a half miles out, and Sebastian skipped his morning banana to meet him there in time.

“You sure you can pull this off?” Harold teased. “Ever run seven miles before?”

“Easy.” Sebastian smiled and gave his hello and goodbye wave.

“Good Morning, Sebastian. You’ll probably hate me for this...”  Harold jogged a bit slower than usual. “You know, I’ll save it for tomorrow though. I want to enjoy this day.”

“I hope it's nothing too bad,” said Sebastian trying to fake his best smile.

“Doctors told me my legs aren't what they used to be. But that’s old news, you’d think they would have told me that years ago.”

“Then just run a mile out and a mile back? I can run a bit extra. I’ll meet you there.”

A week past along with a conversation about the upcoming weather and foreign foods they found to be just average.

“Not sure how much longer I’ll be able to keep this distance up,” Harold said in a sort of embarrassed tone.

“A half mile then. I’ll meet you there.”

“Sebastian.” Harold came to a stop with his hands on his hips, bending over to rub his legs.

“My legs hurt. I hate to say it, but I might need to give running up all together. This might be the last time we have one of our conversations. Just thought I’d let you know I looked forward to it every day.”

“No, just don't run then,” Sebastian said with the little breath he had. “Run zero miles, pull out two chairs, and I’ll meet you there.”

Eric Cavazos was born and raised in Texas, and is the type of person who thinks majoring in history is a good idea. You can find his other ramblings and stories at eric-cavazos.com