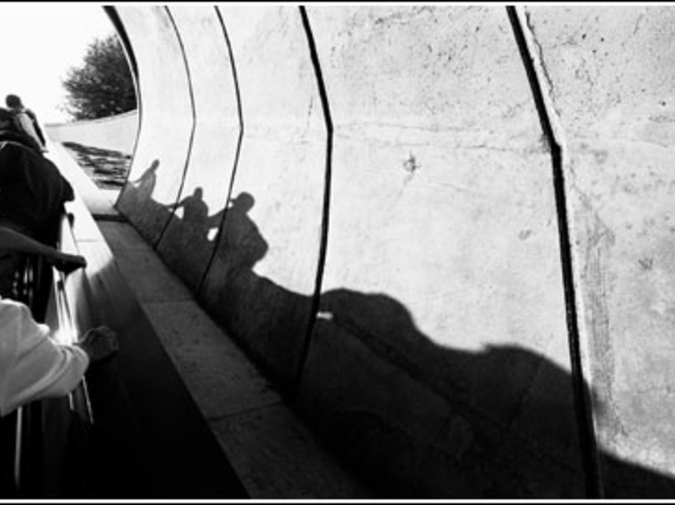 Outside the apartment I'm leaving, in a spread out triangle of park benches on an oversized traffic island lined around the outside with waist-high shrubs, there's a vagrant man, grayed and out of luck, and an encampment made of a great deal of effort and cardboard. He's awake at all hours, shouting, moaning, and exercising. No matter what time I'm getting back from the bars, he's stirring, stewing, doing calisthenics. His condition seems like it could be any given shade of mental instability. Uncontrolled, his movements appear reflexive. Every erratic deep knee-bend and push-up is reactionary.

Alex seemed nervous the day we signed the lease on the new studio in the Kalorama building. I nudged my elbow into her side, gave a slight nod. It's going to be great. I thought she was concerned that I wouldn't be able to make my half of the rent. She agreed that my half at first would actually be closer to a third. In over a month I still had yet to get employed, too busy networking to pull anything together. Alex kept looking over at me whenever the landlord spoke, seemingly for my support, so I kept nodding. When she had signed everything the paperwork was passed over to me. She stared at my signature scratching across the bottom of the page, swallowing.

The Red Line pulls Alex south under the river to the perennially pleasant town center of Arlington at the same time every morning. She left our old city with her head up high, and she no longer slaves it out for a pittance drawing up quarter-page ads for struggling film industry services. Now. Now it's the junk mail trade, some of it very noble junk mail, the letters that send pangs of guilt through you for tossing them out when you see where they're from. Right or left political forces, major players, major influence, major power. Half of the restaurants and record stores in the district have my resume covered in frayed rubber bands and leaky pens at the bottom of a drawer. I get up at noon, read a dozen news sites and talk to the cat every ten minutes. I'm not much to come home to.

It's an early night for last call, the doors are locked behind the last person out. I've been here a week straight. The bartender and I smoke bad weed out of a rolled up piece of tinfoil. The bar tilts. We take off. He walks step in step with me as far as the park, hails a cab to U-Street and vaporizes. Hamburger wrappers and other detritus skate across the intersection. My disappearing home, here again at the stairs. Behind the front door, another door. Explanations. I stay outside on the marbled steps and invent three new languages, then write out a grocery list for the entire coming month in each one. Grapes -- gripeses, agapers, grapplerets. The other man is awake, methodical squat thrusts, against his own will. As it always does, it begins to rain.

The remnants of the hurricane, detached limbs of colliding pressure swinging north up the seaboard. Falling lead beads turning gutters into rivers and the trees dripping. The gods are belligerent. I gain pounds in seconds as the alcohol sweating out of my pores washes away. I set every car on the block on fire. The sight, sound, and smell of it are all equally fantastic and I don't know which to cherish the most. The low moisture in the air weighs down the rising smoke of gasoline and toxic painted metal. It's a lot to breathe in.

When that's all over, I sit on the stairs again and watch him longer. Rats run across the white stone at my feet, diving determinedly into the bushes. The last number 8 bus ambles down Kalorama Street. Cabs go by all night, less and less frequently. The newspaper box has been empty for days. I get hungry. When I get hungry my friends show up and take me out to a very late dinner. I feel like I could eat five steaks but I don't, I only eat three. Dinner is lovely, the conversation lacks. Mouthful after mouthful. I ignore the check because this one's on someone else.

I'm returned home as morning wheezes awake. Neighbors jog by. Alex has bought a small pseudo-mattress that rolls up to fit anywhere. A thin lint-dotted blanket squared tidily across. The shower's running and the room smells of hard-won sleep. I go back to writing the Complete Guide to Complete Guides on a legal notepad. The doorknob turns and I feign sleep, watching a blurry green towel wrapped partially around a set of high cheekbones, thick legs and unflattering straight dark hair. Her mornings are now swift and determined. The world passes by inside and outside. It didn't take long for the big change to shine a light on our differing aspirations, and every other difference. A fight was picked, lines were redrawn, a few plans changed.

The house is home after she's out the door. Today will be another link in the chain of sustainable existence. After the same job search I have every day, I move on to other matters. There's no reception in the apartment, so I grab three copies of the City Paper for sitting on to keep dry and cross the street to the park. I make the same calls as the day before, everyone back home gets the exit strategy update, giving it repeatedly chips away at hours and hours. While on the phone I solve a Rubik's cube, several Sunday crossword puzzles, the mystery of Amelia Earhart, and I balance the budget for some ex-Soviet country I'd never even heard of. On a whim. Everything's on a whim.

When I get back sometime after midnight, duly weathered, the flight itinerary Alex printed out for me at her office is hanging over the edge of the small table we used to use as a nightstand in our old place, in our old city. The copies are weighted down with one hundred and fifty dollars for the futon I bought and put together a few weeks prior with her father. This time she gets to pretend her eyes are closed. With as little sound as possible, my side of the closet goes away, leaving two dozen empty hangers. Fitting everything I can in to a couple square feet. The paintings stay. The stereo stays. The desk stays. The silverware stays. My suitcase is small, nearly everything stays. I go outside for a second to smoke and check on the lunatic, and write a reminder on the back of a receipt from my wallet. Leave the building key on the oven, slide the apartment key under the door after locking up.

The last morning's theme is continuity. The walk down hill, shouldered by marble statues, great dead men on horseback. Dupont Circle, poorly timed traffic lights. The exhaust in your throat. I have a skateboard. I'm an amazing athlete. I grab on to the back of a beat up old pick-up truck that is overflowing with ripe watermelons. I hold on to the tailgate with one hand and grab a large knife from my back pocket, cutting off inch-thick wedges. The wind spreads sugared juice across my cheeks. Hurling rind after rind over my shoulder, bouncing off the windshields behind me. Spat seeds scatter everywhere. In a year or two there will be gigantic watermelons that blanket the neighborhood, and I'll get to say "I did that." The District will throw a fest in my absence, begging for me with waving arms and the key to the city. It will be mine to accept or reject.

I try dragging my luggage to the Metro station until I slip off the curb and twist an ankle. The cab drops me off at the airport with barely a minute to spare. I'm already the man she never knew by the time I'm flipping through the Sky Mall catalog after the plane boards. In eight hours I'm dancing back home on the other side of the country, where I belonged, sweating, carelessly embracing friends I haven't made yet. She's abandoned, the fireflies dying off, fall leaves scattered and the firmament melting around her. Tapping endlessly against her window. A thousand letters begging reconciliation stay folded in half, brittle and clean-lined as the minute they were written. There's a song for everything. Justifications are only just that. Steam's out of the kettle. Promise. I fucked thirty women that night, each one more ridiculously than the last -- and she said I'd never amount to anything.

Ian F. King is a Seattle native, a literature major from the University of Washington, and a worrywart. His work has previously appeared in places such as Hobart, Pindeldyboz, and the now-defunct UW literary erotica journal Penitalia, where he also served briefly as contributing editor. He now lives in Brooklyn, where he has yet to find a good Vietnamese sandwich.