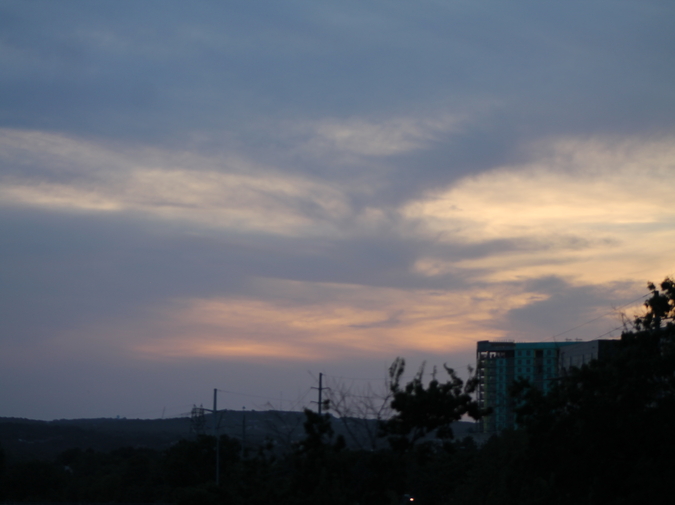 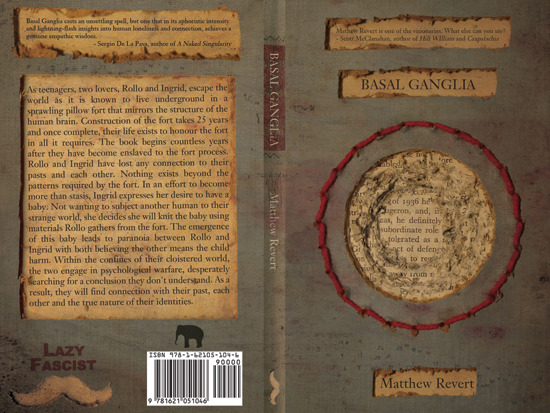 I have been given the opportunity to discuss some of the key inspirations behind my latest book, Basal Ganglia. Works of fiction never just appear from a magical nothing. During the eighteen months spent writing this book, the following list provided a passage by which I could find my personal exit. I am deeply indebted to all that has inspired me.

As teenagers, two lovers, Rollo and Ingrid, escape the world as it is known to live underground in a sprawling pillow fort that mirrors the structure of the human brain. Construction of the fort takes 25 years and once complete, their life exists to honor the fort in all it requires. Basal Ganglia begins countless years after they have become enslaved to the fort process. Rollo and Ingrid have lost any connection to their pasts and each other. Nothing exists beyond the patterns required by the fort. In an effort to become more than stasis, Ingrid expresses her desire to have a baby. Not wanting to subject another human to their strange world, she decides she will knit the baby using materials Rollo gathers from the fort. The emergence of this baby leads to paranoia between Rollo and Ingrid with both believing the other means the child harm. Within the confines of their cloistered world, the two engage in psychological warfare, desperately searching for a conclusion they don't understand. As a result, they will find connection with their past, each other and the true nature of their identities.

The Naked Island by Kaneto Shindo 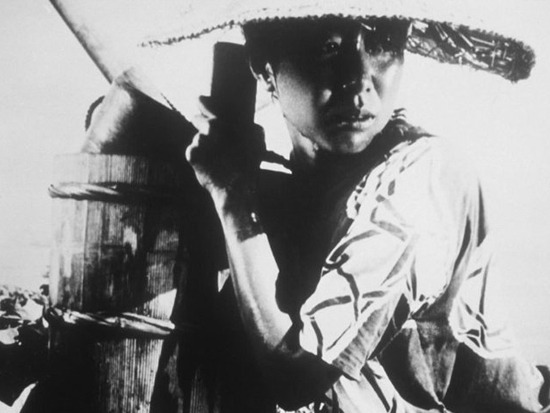 Re-watching Kaneto Shindo’s 1960 masterpiece, The Naked Island during the genesis of Basal Ganglia allowed it to find the voice it was desperately seeking. I had started and discarded upward of ten drafts, none of which embodied what I felt was needed. When watching The Naked Island, it dawned on me I was watching, in part, a visual representation of the way in which Basal Ganglia wanted to find written form.

Over 94 near-wordless minutes, The Naked Island concerns itself with day-to-day minutiae as we follow the menial tasks of a family living alone on an island a short boat trip away from Japan’s mainland. Shindo’s lens lingers on the patterns of daily life, making each gesture deeply beautiful and chilling. Upon viewing, I knew it was the patterns comprised of minutiae that I needed to build ‘Basal Ganglia’ around. 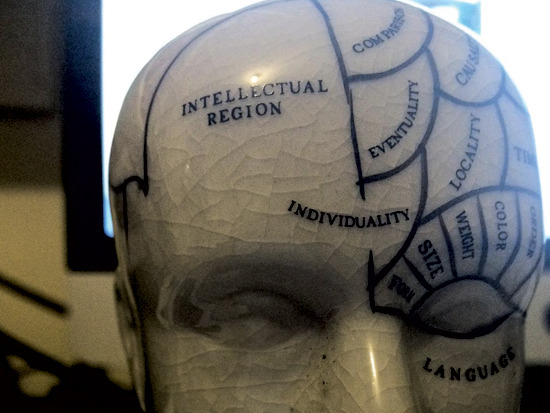 Phrenology has always fascinated me. I have a small phrenology head on a shelf above my writing desk that I often stare into, as though the mere act will inspire me. I have led myself to believe that it has done on several occasions.

When I knew that Basal Ganglia was to take place entirely in a fort that was essentially a human brain, I toyed with the idea of basing its construction on a phrenological framework. Each ‘chamber’ would correspond with the meaning bestowed by each section on a phrenology chart. The pseudo-scientific nature of the practice, along with the sheer number of phrenological cranial areas convinced me to base the fort on standard brain anatomy.

The Golden Age by Michal Ajvaz 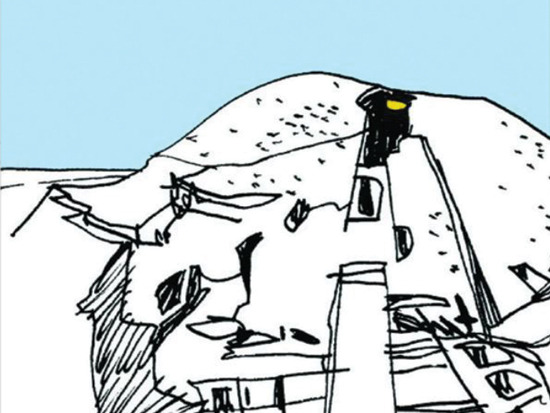 Of the various books I was reading around the time I started work on Basal Ganglia, Michal Ajvaz’s, The Golden Age is one that has stayed with me the most. The Golden Age presents itself as a fictitious travelogue, but quickly becomes so much more. Concerned with the daily lives of otherworldly islanders over a three-year period, The Golden Age becomes a philosophical investigation into language, memory and time.  The islanders spend their life in a self-satisfied fugue state and speak a constantly evolving language that forever replaces itself. The only record (of sorts) that even ties the island to any form of history is a communal book that everyone contributes to in a forever-unfolding story.

I wanted to place Basal Ganglia within a specific fugue state of its own where the perpetuity of a broken now is the only guiding principle. However, where Ajvaz’s islanders have contentment, Rollo and Ingrid are driven toward seeking an understanding of their past and the development of a future. 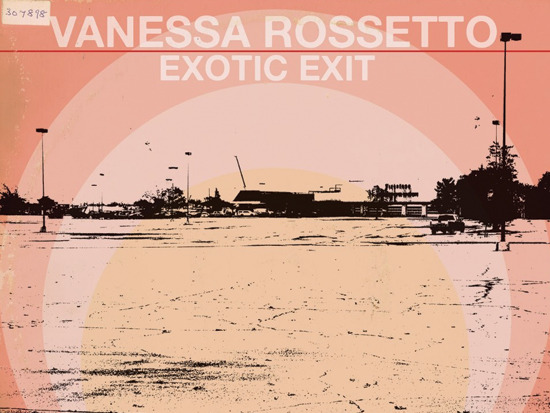 Vanessa Rossetto’s music has inspired me since I first heard ‘Whoreson In The Wilderness’ several years ago, but it is her 2012 release, ‘Exotic Exit’ that I have the closest relationship to. Some time before the release of ‘Exotic Exit’, I was approached by Vanessa and asked if I would be interested in designing the sleeve for the LP. I had never designed an LP sleeve before, so even despite the fact I was already a fan of her music, this was an exciting opportunity. To help me envision an appropriate design, I was given access to an early version of the album and became intimate with each iteration leading to the final release.

I wrote an article for Surround Magazine about Vanessa’s work, which gives a better overall insight into what she does than I can offer here, but in terms of Basal Ganglia, ‘Exotic Exit’ became very important. I have never listened to music while writing, but was compelled to in this case. What I listened to was limited to a very small list. I felt as though the sound world of ‘Exotic Exit’ could very well have occurred within Basal Ganglia. It is a recording that takes quotidian minutiae and presents them in a light that reveals their often-ignored beauty and mystery. It was this trait I was desperate to capture in writing. I wanted simple things like Rollo fixing a pillow or Ingrid knitting concentric circles to possess a near-mystical quality. The guidance ‘Exotic Exit’ provided me in working toward this goal is incalculable. 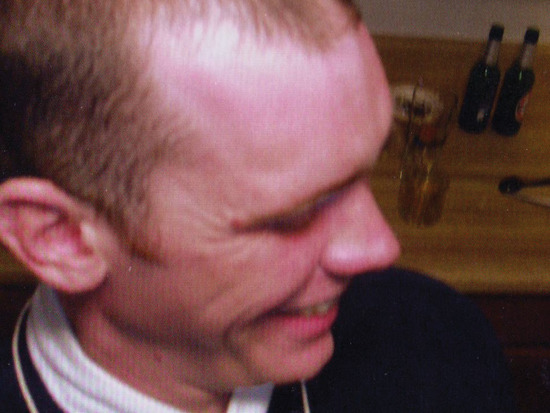 It should come as no surprise the Graham Lambkin owns the label that released the above-mentioned, ‘Exotic Exit’. Both Graham and Vanessa explore similar ideas in their work, albeit in a different way. I don’t think it’s hyperbole to suggest that Graham has been a part of some of most influential music of the last 20 years. It was his 2007 solo CD, ‘Salmon Run’ that captured my attention the most while writing Basal Ganglia.

Graham excels at what I call ‘mystical domesticity’ (a term he would likely cringe at). By this I mean that he, like Vanessa, coax overwhelming emotional responses from the everyday. ‘Salmon Run’ achieves two things specifically that contributed to Basal Ganglia. Firstly, the sounds conjure pasts within the listener that may or may not be true. This tendency very much informs the cloud of fractured memory floating above Rollo and Ingrid. Secondly, ‘Salmon Run’ embodies an ineffable sense of loneliness – one I can only feel rather than understand. The loneliness of ‘Salmon Run’ is the loneliness of Basal Ganglia.

I could have very easily included his recent Erstwhile Records CD with Keith Rowe, ‘Making A’, which was the first recording I listened to when I finally finished writing this book. A very special thing. 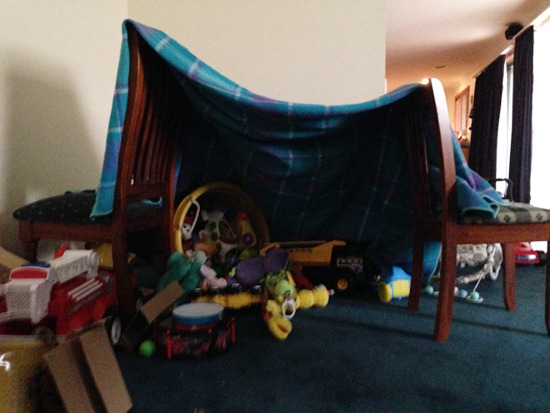 A couple of weeks ago, my nephew, with the help of his mother, constructed this fort (apologies for the blurry image). Later that evening, my nephew asked me to come into his fort, which I did. I watched as he burrowed into its darkest recesses, seeking complete protection from whatever danger he imagined existed beyond it. He turned to me and, in a whisper, said, ‘shh… it’s night time’.

Without the drive that led my nephew into the core of this fort, Basal Ganglia could never have existed. Basal Ganglia is that urge that all children (and most adults) have at some point in their lives to flee into the safety of their own world. A world that rejects the horrors, both real and imagined, that we, in our weakness, project upon all that surrounds us. Basal Ganglia is this urge taken to the extreme. By fleeing the horrors of the external world, we then subject ourselves to the private horrors of our personal ones. 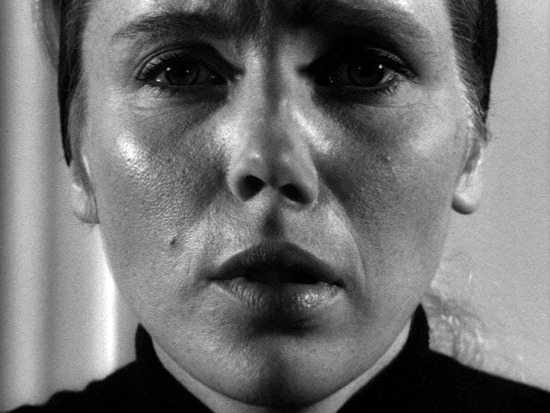 In a career that produced many depressing masterpieces, Ingmar Bergman’s Persona is perhaps my favourite. Its influence on Basal Ganglia cannot be understated and allowed me a means by which to explore some of the more complicated themes of identity and internal conflict present in the book. Although there are officially five people who appear in ‘Persona’, the overwhelming bulk of the film is occupied solely by two individuals, Alma and Elisabet. The intense, often-wordless nature of the relationship between Alma and Elisabet is unlike any I have seen portrayed before in any art form. The merging of their identities still shocks me.

Persona takes a very small situation and explores this to ask some very large questions about the nature of existence, identity and our relationship to the self. I will never claim to have achieved anything in the same ballpark as this staggering film, but I imagine Basal Ganglia would have been a very different beast without it.


The Burrow by Franz Kafka 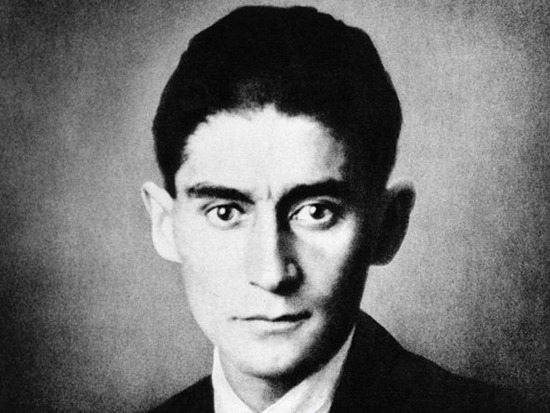 ‘The Burrow’ was an unfinished story of Kafka’s published after his death. A conclusion to this story is rumoured to have existed at one point, but I am more than satisfied with what we, as readers, were given. ‘The Burrow’ is among my favourites of Kafka’s work and concerns an undefined creature that lives underground. The creature’s life is dedicated to the maintenance of his dwelling with the single-minded intent of protecting itself from a paranoid projection of external danger. While the creature itself lives in a burrow, Kafka forces readers into the even deeper burrow of the creature’s tortured mind. It’s a fascinating, disquieting journey.

Reading Basal Ganglia, it’s not difficult to see key thematic similarities. Rollo and Ingrid very much live in a burrow of their own, and concern themselves with its endless maintenance. Within this they find both purpose and imprisonment. ‘The Burrow’ acted as a helpful starting point and I, Rollo and Ingrid are indebted to its brilliance. 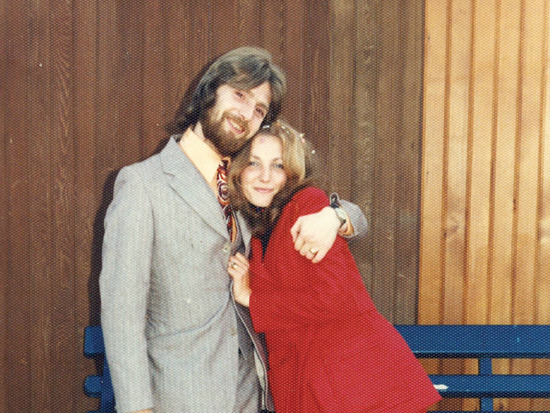 In the limbo that exists between a book’s completion and its subsequent release, my father passed away very suddenly. While this incident occurred after it had a chance to inform the content of the book, it has become an integral part of the release. I find myself imposing retroactive meaning to parts of Basal Ganglia that obviously weren’t intended. It’s impossible for me not to view what I have written in this light. In my mind, Basal Ganglia will always stand as representing the endpoint of my father’s life.

I confronted the death of my mother at 14 very directly with my second book, The Tumours Made Me Interesting. It is with melancholy fascination that I consider the influence these events have had, and likely always will have, on my writing. I’m in a very unique position to witness it happen within the moment. I don’t take the influence these two individuals have had on my work lightly and will always miss them.

Basal Ganglia was released by Lazy Fascist press and is available now.