Explaining An Affinity for R.A. Dickey 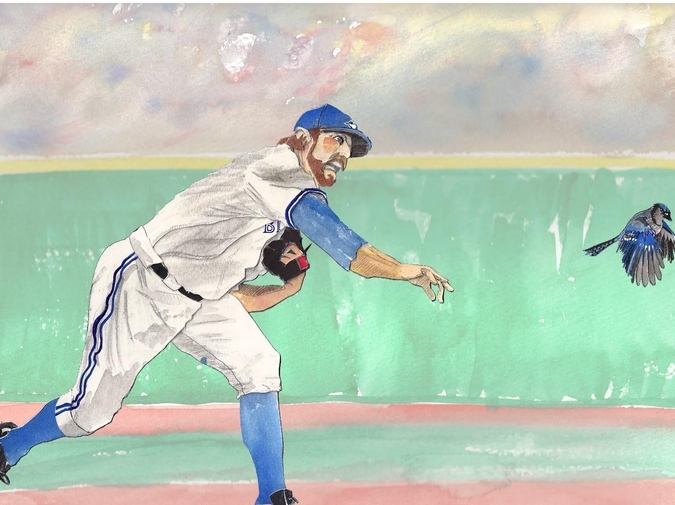 That his fingernails are immaculate, shaped
into thin arches of moon. That he files them
in the locker room before games, between innings in the dugout.
That one hangnail can send him to the Disabled List for weeks.
That there is fragility in this, his reliance
on a part of the body that is meant to be torn away.

That he spent years becoming
another kind of player, and that this is necessary
for a knuckleballer, to have spent
those years and then to unspend them,
that the knuckleball requires this doing and undoing
and redoing, and that it chooses for its work
the one who best knows the meaning of revision.

That he cannot know, when he releases the ball, what shape
it will take. That he spends his life in pursuit
of a pitch he cannot ultimately control, which is
a kind of mutual understanding, I think,
between him and his pitch,
a kind of letting go.

That his hand is a claw, his arm a wing. That he is a bird
and so the ball, too, is a bird simply because it is his,
having been clenched in that way, having been pushed
from his body (and never thrown), because it longs for flight,
not speed. That speed is the least of these things.

That the knuckleball never asks for more
than its own release. That it wants to be given
and never given to. Not ligament or joint or nerve.
Not the precarious alignment of bone. It allows him to keep
his arm that it may find its end at the end
of an arc, however slowly, however it drifts,
over and over again—which  is like a beginning
if the beginning comes in pieces,
if it comes over time.

Lauri Anderson Alford's fiction has appeared in or is forthcoming from The Cincinnati Review, The Carolina Quarterly,Greensboro Review, PANK, The Common, and elsewhere. Her recent awards include the Tobias Wolff Award in Fiction, The Robert Watson Literary Prize, and a Tennessee Williams scholarship from the Sewanee Writers' Conference. She is also the Round Six winner of NPR's Three-Minute Fiction Contest. Visit her online at www.lauriandersonalford.com.