excerpt from The Avian Gospels (ch. 33) 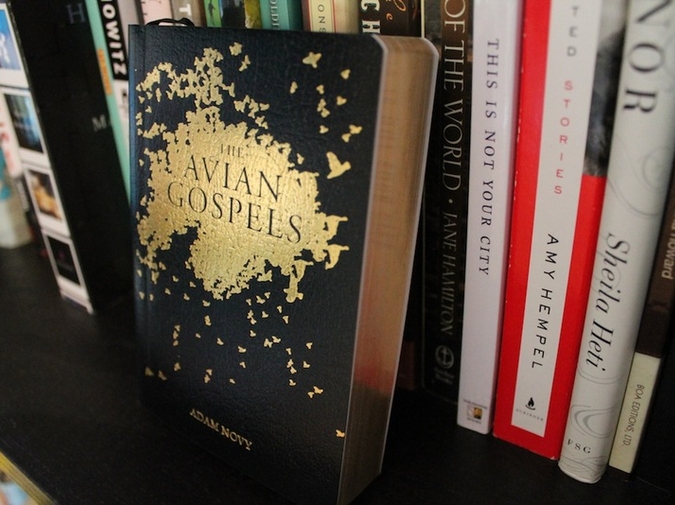 In 2010, we published Adam Novy's The Avian Gospels as two volumes, kind of Old and New Testament style. Having sold out of the two-volume edition, the book is now newly available, now been recombined back into a single volume with rounded corners, gilded edges, a ribbon bookmark, and Bible-style line numbering.

We are super excited! To celebrate, we are calling this "Adam Novy Week" and will feature an excerpt, interview, trailer, or some other kind of Adam Novy miscellany every day. Purchase the book here.

Our children wore accessories that featured Morgan’s image; we purchased them at escalating prices. Gypsies sold these objects, at first, until the Judge muscled in, after which the Gypsies paid a tribute, or, as the Judge called it, an entertainment tax, or as we called it, good business, or, as the Gypsies called it, extortion.

We didn’t know why the Bird Boy had been injured, the papers said an accident, implying it had been his fault. All of us wanted him back at work de-birding, many of us wanted him dead. Our children sent him cards that read Get Well, We Miss You!, or suchlike sentiments, which they’d made during school. At recess, the children mimicked Gypsy dances, spinning on their heads like Jewish toys. Some of them even started ska bands. We found our offspring helplessly enthralled by Gypsy culture. It was out of control. What were our suburbs coming to, and where was the outrage?

The get-well cards disappeared into the ghetto, kind of like our taxes. For all we cared, the Bird Boy burned the cards. Why had God cursed us with birds, and worse, with only Gypsies to de-bird us, or Swedes, or whatever they were called? Had we been punished for our sins, and, if so, which sins? The war with Hungary? That bit about how Hungary attacked us, for example: it isn’t really true. We pretty much provoked them. There were really persuasive reasons for it. No one can judge us who wasn’t there, it’s more than a you-had-to-be-there thing; it’s a you-had-to-feel-our-fear thing, for when so many bodies feel the fear, can they still be held responsible? Our memory would speak about our guilt, and our pride would shout it down, kind of thing. God liked to talk about our guilt, however, and the birds were his words, and so were Gypsies, that red-haired, pock-marked pox upon our city.

We suspected, in our hearts, that we deserved the birds.

The Bird Boy we hated but needed like a maid who knows our house more than we do went back to his birds, herding flocks into sky-blotting thunderheads and sending them to migrate to the forests, until they changed their stupid bird-minds, or instinct called them back, or whatever it was that happened, don’t ask us, we still don’t understand, there aren’t enough of us to be an “us” anymore. We are obsolete. The Swedes took the same routes as the garbage men, which is really what they were to us: specialists in garbage. Mystic, feathered garbage. They even kept the same schedules as the garbagemen; the actual garbage collectors toiled in their wake.

The birdshows, the feathery ineffable, resumed, after nine barren days. Once again, we trooped into the city with our children, though time had already made us doubtful of our memories. We hoped the boy had lost whatever powers he had had; we tried to pretend he’d never had them. His performances were some kind of mistake, we insisted, and set about renouncing them.

But once we saw the birdshows again, our resistance to his art disappeared. The thrill we had forgotten grew stronger, we were rapt against our will, our awe unwelcome, our appetite the hungrier the more we disavowed it. The boy himself was camouflaged in bruises, we could hardly see his gestures in the shadows of the square, his face seemed smeared by violets. The birds, ah, you birds, we could see you in the sunset. You made your own sunset. The sun, blushing, hurried off the stage, bested by the birds and the Bird Boy. He somehow used finches to out-gold the gold of the sun. Stars made of snowbirds seemed to wink in the nightblack of crows. Who could help but weep before his palette? It had never been more beautiful, yet he limped across the square, wounded from the beating.