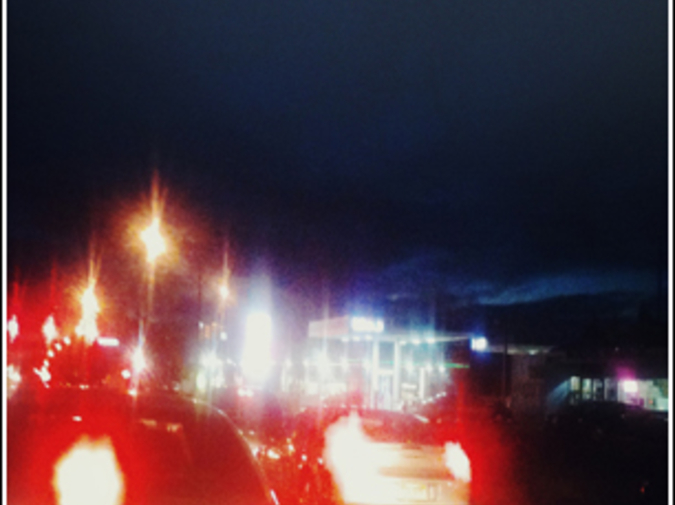 1) Technically, everything remains but the stereo, circa 1998, a sound system so old it couldn't play CD's for more than an hour without overheating into unbearable skips; FM stations barely detectable, their wavelengths unmatchable in this aged technology. Ebay listings for similar products sell for less than 15 dollars.

2)  When I say everything, I refer to objects of monetary value, including money stowed in a driver's side tray, the audiotape boxed sets in the middle console, the feathered face hanging from the rearview mirror, the turtle charm my uncle made for me with aged brown beads and thin strips of stiff rawhide. Including the backseat held a case with over 200 Compact Discs worth far more than the stereo; the bottle of blue wiper fluid, protection at zero degrees Fahrenheit. Including the contents of the trunk: an uneven music stand, a bottle of transmission fluid, a stained sweatshirt and unused work gloves saved for unknown emergency.

3) The guy in the Black Flag Shirt, walking past me while I survey the damage. "Oh shit," he says to no one in particular as he keeps on walking.

{These beads, bluish glass spiderwebbing from broken wisps, crystallized gobbets. Truth be told I love the untethered angles of the countless shards, want to take them in my mouth and let their taste pour out, shredding cheek and gum.}

6) Glass, two curved sheets treated with laminate, bound together in complex polymers. Through this treatment, car glass shatters into harmless pellets that clump together.

{But still. While cleaning up the remnants, I find my hands slivered, cuts beneath the surface but never quite enough to bleed. Only later do I remember the gloves in the trunk, the protection they were supposed to provide.}

7) The early days of autumn, glass mixing with clumps of dying leaves, shocked off the trees in a premature frost. Branches above lay bare, though the leaves on the ground remain green, the rare condition of the nearly alive.

8) A CD, Rush's The Spirit of the Radio: Greatest Hits, forever wedged between molding and stereo, liberated from its hiding place. I haven't seen this disc in years. Unfortunately, without its proper case, the incessant scratching of the car's movement has left the tracks unlistenable.

9) (Assumed) Everything in the glove compartment, though it's clearly been rifled through while searching for objects of value. The compartment remains open, exposed to the elements—loose papers blow through the gashed window; this wind's been blowing all fucking day.

{While searching for anything they may have taken, I find my first driver's license; ages expired, issued in Michigan, my former home. My hair is a few inches shorter, a shadow across my face give the odd appearance of a moustache. When first getting this license I very nearly failed the test because of my inability to parallel park, my destruction of several orange cones. I would not have passed if I pulled out from the designated parking spot and started over: only by driving through the rough angles—through further destruction—was I able to fit between the lines.

10) Contamination, the insecurity that comes with this kind of invasion of space.

{The police never show up because the crime's so common. They tell me to call back if I find any evidence. I try to go all CSI: sifting through the glass, checking the floor mats, finding nothing but the filth of my car. Later, with my wife, we will go to the social club across the street to see if their surveillance camera faces the street. A man with a glass eye will tell us their camera is broken.}

11) Glass: the sounds of glass: the creation of glass.

{A new window is installed, amazing in its clarity. The old glass—fifteen years exposed to the of the breath of the world, where my wife's cheek rests on long car rides to Michigan—was, unbeknownst to us, forever stained. How could we have known that clarity was relative, that a replacement window could cast such harsh brightness?}

David LeGault's work has appeared in Fourth Genre, Barrel House, and Ninth Letter. He lives and writes in Minneapolis.