Everything I know about postmodernism I learned from the Phillies 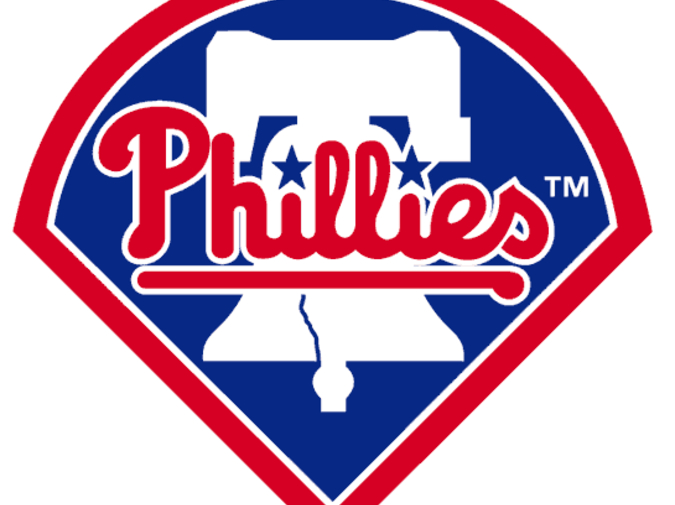 As an urban rust-belt minister, activist, and writer, I gravitate toward third spaces and common points of reference as a matter of vocation.  I like to be where people are, uncovering the things we have in common and the places.  There are hospitals and homeless shelters, community centers, coffee shops and church hall basements, bus stops, bars, and ball fields.  The conviction at the core of it has to do with the holiness of pluralism and the tension of seeing through our mirrors darkly while wrestling with all kinds of faith; faith in God or people, faith in the redemptive, restorative, and vindicating nature of, say, the Resurrection, or a winning baseball season.

I was born and raised in Pennsylvania, and I work and live in the Commonwealth’s third-largest city, Allentown, also a single from Billy Joel’s The Nylon Curtain.  Here, we are mostly Phillies fans.  When we won our first World Series in the fall of 1980, I was ten months old.  I’d be a father myself before they did it again, and those 27 seasons in between taught me everything I know about the intuitions and instinctive gambits that rippled through the 20th century in art, fashion, literature, sports, and, finally religion.  All that is to say, everything I know about postmodernism I learned from the Phillies.

Like all communities, baseball fandom has manifest a pluralistic call with uneven fealty.  When I was learning to be a minister and studying the history of American religion, Randall Balmer, one of its most important contemporary chroniclers, talked about it this way:  baseball was and is for many communities the quintessential immigrant game: the entire point is making it safely home.  Italians like my ancestors and like the DiMaggios making it through the “Medgan” neighborhoods, Hispanics making it through white ones.  Upward mobility was closed to most poor European immigrants outside of sports, specifically baseball, even as the national pastime was racially segregated from 1889 to 1947.  The ultimate game of outcasts, from its barnstorming carnival origins to its identification with prodigious new stock talent, baseball’s segregation remains one of the most flagrant practical violations of a just and noble metanarrative outside of more widely recognized religions. Baseball, from the start, has been a game of contradictions.

Looking back, the contradiction between my hope in a Phils franchise resurrection and the realties on the field was a formative experience in myth and meaning-making.  The stars of 1980 were called Wheeze Kids three years later, losing the ’83 World Series to a younger, quicker Baltimore.  On pilgrimages to Veterans Stadium until 1989, The Year Mike Schmidt Retired, I held out hope with no real reason.  When the games felt out of hand, I’d train my GI Joe binoculars on the press box, looking for Harry Kalas and Ritchie Ashburn, imploring these gods to maybe, somehow intervene.  I held my beliefs about my team in tension with what was clear and plain.  To me, like any kid not caught up in vulgar front-running, tomorrow was another game.  When fall came without the playoffs, I counted days till spring.  Eventually, cheering for this team that never won became a badge of honor in and of itself.  It might not mean a thing to you, but it meant an awful lot to me.

As a term, postmodernism came into my vocabulary in 1988.  It had not yet moved from art and English and music into theology the way it has in recent years by then, but it was, of course, still extant in the visual codes of culture. Nowhere was this more so than in the still-70s branding marks of 80s baseball teams.  I know this because Topps and Fleer were catechists and prayer cards before I could even read.  I’d never seen the funky, curvy Phillies initial (the main piece of their 1970 – 1991 look) as anything resembling a letter “p.”  It was at best a topless f, just like its Flyers cousin, until one day in that off-season I read a piece in a team yearbook talking about that sublime form as a "postmodern little P," and even though I had no clue what that meant, I also knew exactly what it meant.  To this day, it's no small effort for me to actually see that symbol as a letter.  I know it is one.  I know it's supposed to be one.  But it's also not one.  It's a solitary icon divorced by style from any alphabetic context and it stands for an ideal that can be summed up in a few phrases and names: 1980, World Series, Veterans Stadium, Pete Rose, Mike Schmidt, Steve Carlton, Tug McGraw.  That fact that it's also a P only matters when you see it rendered as the beginning of "phillies," as in this piece from 1984:

Or this entry from 1970, which absolutely has to have been a response to the expansion Padres' swinging friar from a year before: 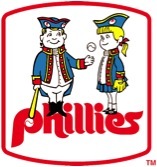 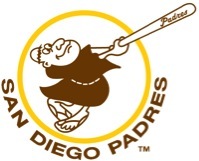 With the waning tide of bicenteniallism behind them, 1978 would see the birth of the most famous postmodern non sequitur of all time:

Look at him waving just like he knows it.  When people forget about how awesome, specially, and charmingly messed up the late 70s and 80s were, it’s because they forget the cultural crucibles that conjured things like this.  What is he?  Who knows? Who cares?  How does he intrinsically relate to baseball or to the Phillies? He doesn't, and it’s delightful!  Of course he does now. Of course he was a bigger draw at the Vet than those mediocre teams I followed and believed in all those years. When the action on the field crushed, again, our hopes and confirmed our native fears, the Phanatic cut the tension.  He exacted justice for us with his liberating nonsense and his belly bounces.  Every jiggle, every move, every elbow dropped on a Met in effigy said “Our team really sucks.  What are any of us doing here?  And yet here we are, and where we want to be.”  Harry Kalas was the voice of God in this redemptive schema.  Ashburn was the Holy Ghost, our only living legend from the Greatest Generation.  Young kids hopelessly, aimlessly hoping on the Phils had these institutions and little else holding us together from Schmidt's 500th homer to the 1993 pennant. From the '94 strike to the advent of Chase Utley. Even though most of baseball's postmodern design aesthetics came from the American League, it was us, the stalwart fans of the Phillies, the most senior of teams on the Senior Circuit, the losing-est franchise at the highest levels of North American sports, who owned the best rendition of the look from sheer necessity.  That strange p was pointless?  So was our holding out hope.  The Phanatic is absurd?  Yeah, and what’s your point?  So were lots of those seasons.  And we found meaning in this pointlessness, we found celebration in that absurdity, in our leaps of faith.

I was finishing Div School when the Phils began showing new signs of life last decade.  On course to renewed relevance, and for a while, at least, ascendance, marketing people brought the consumer branding of my youth back into rotation.  The postmodern little p, rendered in maroon on powder blue with names like Rollins, Howard, Utley alongside Schmidt and Tug.  We bought the now-new-retro, our old beloved symbols, on hats and shirts and hoodies and wore them to the ballpark to say three things at once: we believed in the glory of glorious times; felt, almost personally, the loss of that time and those heroes; and believed again that good times were returning.  Like Harry used to sing, we had the highest of hopes.  And with good reason.

Kruk, Daulton, and Dykstra were the go-to guys when the Phillies got their first wave of throwback branding in 1991.  Those new-then kits and wordmarks reached back to the 50s, to Ashburn’s era. That was over 20 years ago now, and even though we won it all in 2008 in the neo-classic look, it’s time to rethink throwback to the fullest.  That ’93 team who beat the Braves the last time pennants really mattered?  They all started  their Phils careers in the funky p and in the Absurd Era. After the branding change, they grew their beards and mullets, an “America’s Most Wanted” foil to the Braves, “America’s Team.”  Coincidence?  Modernism says yes.  Postmodernism says that's all up to us. When your team is so bad for so long, fandom and irony blur at the edges. What made the rouge look awesome, what made John Kruk’s gut so great and Phanatic so effective were the outsized, outlandish enthusiasms they mustered through the worst sports luck of all time. We laughed with them in the face of the meaningless futility of fandom, and that was meaningful.

Thank you, Phanatic and postmodern P, thank you Kruk and Dutch and Nails, thank you, thank 10,000 blessed losses, for teaching me that there's finally nothing futile about what Nick Hornby calls "the value of investing time and emotion in things I cannot control, and of belonging to a community whose aspirations I share completely and uncritically.”  For teaching me to make myth and meaning for myself, so that I might also find it elsewhere.

Christopher Cocca's work has been featured by The Huffington Post, Brevity, elimae, Pindeldyboz, Geez Magazine, Creative Nonfiction, Generate, and other publications. He earned a Master of Divinity from Yale Divinity School in 2005 and a Master of Fine Arts in Creative Writing from The New School in 2011.  He blogs and tumbles and is the author of What Other People Heard When I Taught Myself To Speak.