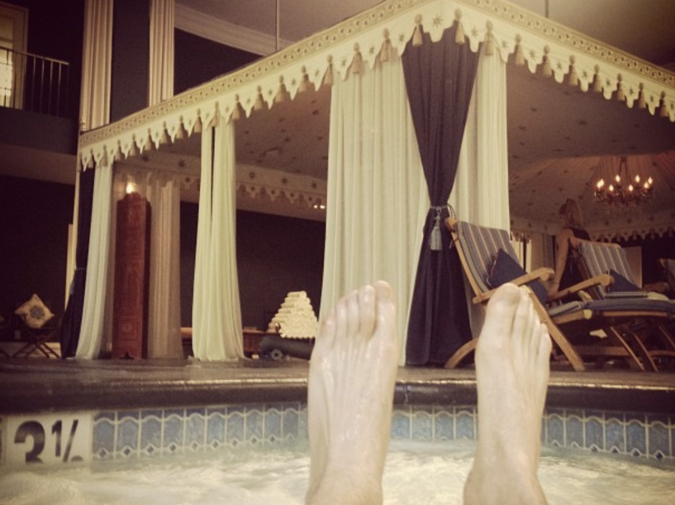 I used to be a blackout drinker. I spent many blackouts in brothels. This isn’t cool because I can't remember a lot of the intercourse I paid a lot of money to have.

The main brothel I went to had several rooms with jacuzzis in the rooms. I’d turn up and the manager lady would always ask if I wanted a room with a jacuzzi, because I always did want a room with a jacuzzi. The jacuzzi rooms were more expensive but it was worth it. I enjoyed sitting in the bubbly water, Jack and Coke in my hand, being inquisitive and intelligent, and telling the girls worldly shit I guessed they didn’t know about.

I wanted them to like me in that skittish way a girl likes her new boyfriend. The next day I’d wake up on my kitchen floor, and I couldn’t remember anything I’d done the night before, but I knew I’d been in the brothels because my hands and body smelled like chlorine from the jacuzzis. When I smelled that chlorine on myself I felt ashamed and disgusted, and also very terrified of people and of the ATM. Sometimes I punched myself in the jaw.

As you can imagine this got pretty expensive. And I wasn't really earning lots of money, but I acted like I was.

One day I found out I was two grand in arrears in my rent. I had no idea how this happened. But I was about to get evicted, so I went to the bank to get a credit card to pay what I owed. I sat at across a desk from a lady with a tight ballerina bun on her head.

“Your limit is fifteen thousand,” she said.

I was hoping for around three thousand. With that I could pay the two grand in arrears and with what was left I could buy some new shoes and some jeans, and also a set of towels and maybe a sheet. I didn’t have very nice sheets.

I accepted the limit she gave to me. I’d pay what I owed in rent and keep the card for an ‘emergency.’ I’d heard people talk about the concept of an emergency credit card, and I’d always fancied one for myself. These people also talked about going on overseas holidays and saving money for deposits on houses. I had no idea how they did all this great stuff, maybe it was magic. I was in awe of their magic.

As it turned out I had an emergency that night when I drunk four bottles of wine and some beers and needed to get to a brothel as soon as possible. I went in around ten, and paid $780 for three hours. I selected a lady named Brenda. She had a bag of meth and a glass pipe, so we stayed in the room and smoked the meth and had electric conversations. All I remember is that the room was blue—blue curtains, blue lights, blue rug. I don’t even know if we had intercourse.

They had an ATM out in the lobby, so I went out every few hours and got out another three hundred on my new credit card, and came back and gave it to Brenda, and she went out for more meth. We must have smoked a lot of meth and talked about all sorts of great stuff because the next day when I walked out into midday traffic noise, I wanted to lie down and die.

But I couldn’t die because I was three hours late for work.

Going to work after you’ve been on an meth bender in a brothel is not a good idea, but I was blessed with a very strong work ethic, which meant I found calling in sick to be the height of moral repugnance.

I went home and looked in the kitchen drawers for empty plastic drug bags. Sometimes when I did this I found enough to scrape together a line, mostly I’d just go have a shower. On this day I found nothing, not even under the rolling pin, where I had found bags on three separate occasions.

I’m not sure what it was, could’ve been all that clean water splashing down on my brain, but the showers were the worst. I always ended up banging my head against the wet tiled wall, chanting ‘you idiot you idiot you did it again you idiot idiot idiot!’ And then I’d tell myself to kill myself, but in a jokey kind of a way. I don’t think I ever really meant it.

I rolled out of the lift and into the office with my eyeballs rolling round like crazy, and my colleagues looked at me and turned the corners of their mouths down, like they’d seen a stray dog eating a kebab out of the rubbish. Sometimes I’d get on my high horse but mostly I’d just slink to my desk, watch music videos on YouTube and pretend I’d made the music videos, and imagine people’s blown away faces when I showed them all the great music videos I’d made.

Once I was in a work meeting and I had to excuse myself to go to a café to meet a girl from a brothel. I’d arranged to meet her the night before and I was very excited. She had a rockabilly vibe, with swallows tattooed above brand new breasts that didn’t look fake at all. She reminded me of a Suicide Girl—you know the soft porn website where they have naked pictures of semi-goth girls with sailor jerry tats? Yeah, that one. We’d been in the jacuzzi and she told me to be gentle with her breasts, on account of their newness. That was when I fell in love with her and asked her to meet me for coffee. She was hesitant at first but after a while I guess she realized I was different.

Her name was Rhonda by the way, and I know that is a typical name for a rockabilly girl, but whatever. Also it didn’t matter, in my mind she was Suicide Girl.

So there I was sitting at an outside table at the cafe, sipping on a beer, waiting for Suicide Girl to arrive. I imagined she’d be wearing a red and white gingham dress from the 50s, and for some reason she’d be carrying an old brown leather briefcase. I had no idea what she’d have in that briefcase, I guess I just thought she’d look cool with a briefcase. Also I started to picture our life together. Would I be ok with her going off to have sex with strange men every night? Would I lie and tell people she worked the nightshift at a top-secret laboratory? After a while it struck me that having a sex worker for a girlfriend would make me interesting. She’d make tons of money so I could quit work and do that great thing I was always going to do. I’d counsel her through the tough nights. I’d be a good listener.

After two hours of waiting at the café for Suicide Girl, I started to wonder if I’d arranged to meet her at all. I mean I kind of remembered asking her and her saying yes, but maybe I just really wanted to ask her and didn’t but told myself I did. Had I fantasized the coffee date with Suicide Girl, convinced myself the fantasy was real and left my real world meeting to pursue the fantasy? What kind of shit was that. I left the café and headed down to the brothel to get some answers from Suicide Girl.

I pushed the buzzer and as usual the manager lady opened the door with a big plastic grin melted to her face. I guess she thought I was about to whip out that lovely credit card of mine, but I didn’t, I asked if Suicide Girl was working. She said no but that she had many lovely ladies available, like Crystal, Amber or Porsha. I asked for Suicide Girl’s number and her smile turned into a pitiful frown, and I knew she thought I’d become one of those types, which of course I hadn’t.

I had no credit on my phone but there was a phone booth next to the brothel, so I went and stood in a pool of dried piss and dialled the first number that came into my head, which turned out to be the number of a dealer I owed money to. When he heard my voice he started yelling, which I took as a sign to go after my destiny.

I was halfway over the high wooden fence out the back of the brothel when this old wiry guy wearing a leather jacket and football shorts came out. He told me to get the fuck down. I crouched up there on top of my fence. I said I’d come to pick up my girlfriend for dinner. To which he said nothing. He just let the corner of his mouth twitch. I looked down at the twitch and figured him for a guy who’d done some time, which despite his age made him a lot tougher than me. He’d know some prison moves.

I do know that when I came out of another brothel a few hours later, I saw some people having beers at a table outside a pub. I worked with these people. They called me over and asked me where I’d been, and I said on a date. They made whistling noises and asked who the lucky lady was. I became terrified that I smelled of chlorine and they could smell the chlorine on me & knew exactly what that smell meant. I fumbled an excuse and tripped over a chair leg as I left.

About a week later my fifteen thousand dollar credit card ran dry. What I decided to do was get another card with a seventeen grand limit to pay the other one off. This would leave me two grand to spend on a holiday or some nice plates for my kitchen.

Rupert Taylor is from Aotearoa New Zealand but he lives in Sydney, Australia. He has written one film (called BEVERLY) and some TV, and his stories have appeared (or will appear) in Maudlin House, The Nonconformist Magazine and Storgy Magazine. He can be found on Instagram: @open_robe