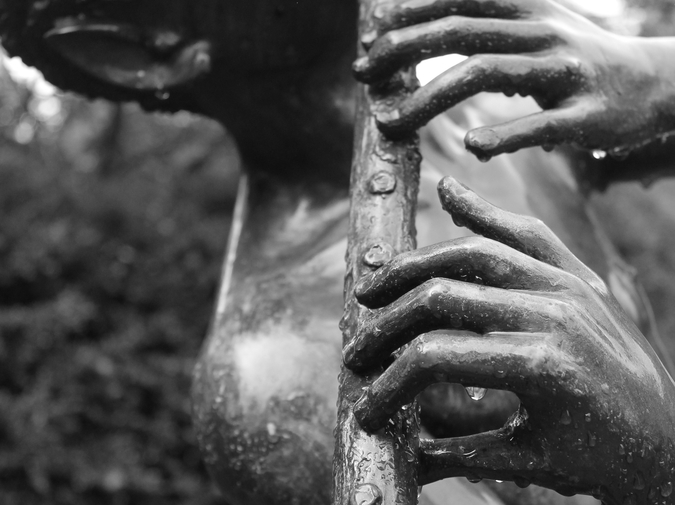 When Ettore was a boy, he dreamed of puppets hovering over his bed. They were two raggedy old men discussing math and eating pistachios. They dropped the pistachio shells onto Ettore's face, and he brushed them off, waking slightly and then falling back to sleep with the men's voices sliding into and out of his thoughts.

Some mornings he woke and the pebbles in his body were filled with lead, and on those mornings, it was only with great difficulty that he opened his eyes. Sometimes he did not open his eyes, but waited for the day to pass by, imagining the alveoli of his lungs expanding and collapsing. If he was able, he would convince himself to roll to a sitting position, because he knew that the pebbles, leaden though they were, contained some trace of air that would act as a level across his cells and it was likely that if he sat up, he would stay up. Raising his arms required too many distinct instructions sent to the brain; raising the sides of his mouth: just too exhausting. These days threatened to reduce him to a molten lump that might melt through the floor like sand working through a sieve.

Other mornings he woke and the pebbles were balloons filled with air, his lungs so full in his chest that he could not breathe. He felt as though he would levitate, his body unrestricted by weight and gravity. But in spite of this lightness, he couldn't exert motion or direction on any part of himself: air crushed him from inside, and his sense of freedom from lead morphed into atomic suffocation.

He put his hand on the wall he shared with Teresa. On the other side, her headboard, or her desk, or her bookcase, or her hand touched the wall and Ettore felt her presence flickering through the plaster into his fingertips. He felt her energy in the air, collecting in strings of electricity that made his fingers tingle. He felt her in his blood. He put his cheek and ear against the wall to listen, as he'd done many times before. He felt something whir like a seashell imitating the sea: it was either the wall, or his head, or Teresa in his head, or Teresa humming on the other side of the wall, her mouth open and breathing hot breath against the plaster where Ettore's ear lay, cupped and open, listening.

Lena Bertone's writing has appeared in wigleaf, Caketrain, apt, PANK, matchbook, and other magazines. She has a novella forthcoming from The Lit Pub and a chapbook coming from Origami Zoo Press in 2014.