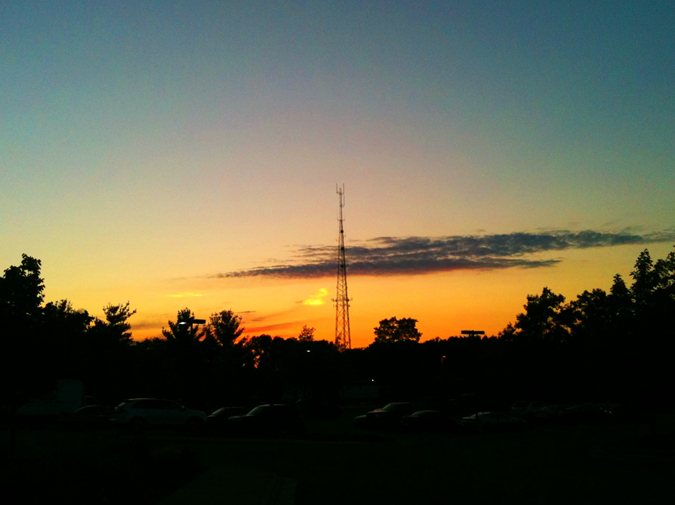 Ian’s mother warned him about jumping on the mattress.

“You’ll hurt your head,” she sighed.  “I’ve had enough hurt heads in my life.”

She was too tired to scold him.  His father had been the stern one, a housepainter with spattered jeans and fingers stinking of turpentine.  If Ian disobeyed, his father would do the spanking.  But doctors found a white splotch on his brain.  So now Ian tucked his hands beneath his armpits and flapped and clucked and jumped on the bed.

His mother had taken him to the petting farm the week after his father’s funeral.  “For fresh air,” she said, hugging herself.  It was warm out.  Chickens flapped, hovering just above the ground.  Ian asked why couldn’t chickens fly?  What was wrong with them?

“Nothing,” she said.  “They’re just too heavy.  They’re carrying too much weight.”

Trails of old tears overlapped his mother’s cheeks for days at a time.  She never wiped them off.  Why bother?  It was like making his bed, Ian thought.  Why would he make his bed if he were just going to sleep in it again later?

He jumped higher, harder.  He tried to slap the ceiling, high five his father.  Maybe he’d wake up and spank Ian so hard that the handprint left would smell like turpentine?  He wanted to see if his mother would get mad.  Or would she stay in her room with the curtains drawn looking through photo albums, spraying his father’s cologne on the couch, on pillows, on shirts she’d crumple and toss on the floor beside the laundry basket?

Ian mistimed a jump.  He landed on the floor with his hands still tucked beneath his armpits and broke his elbows.  The doctor found a damaged ligament near the humerus, though Ian didn’t feel like laughing.  It felt like someone held matches under his funny bones.  Thick white casts wrapped his arms.  They looked like wings.  His friends played tic-tac-toe on them.  Someone wrote Pocket Pool Injury and Ian wasn’t really sure what it meant or why the other kids found it so funny or why his teacher had to scribble it out.

During Career Day, boys were casts of their fathers.  Men talked about a good work ethic.  The school janitor discussed solvents for gum wads and paint.  He partnered up with Ian while fathers made macaroni crafts with their sons and daughters.

Sometimes Marie sang to him under the sheets.  “I have these thin vocal cords,” she said.  “I’m a natural falsetto.”  She sang in a choir.  Ian could pick her voice out of the tenors and sopranos and baritones.  She directed songs into his ear as he bit her neck.  Afterward, they inspected their bodies as if they might have transformed during, touching palms and comparing finger lengths, placing forearms side by side.  The length of the forearm was equal to one cubit, she’d learned in church school as a girl.  “Your cubit is bigger than my cubit,” Marie said.  She worked at the Laundromat, and said you could really learn about someone by the stains on their laundry.  You could know them, what they liked, what they lacked, what they were going through.  Food stains were a tell of some sort of loss.  Ink equaled workaholic.  “Coffee stains more times than not meant a smoker trying to quit,” she said.  “You could tell if they were succeeding or not by the yellow nicotine smudges.”  She licked his navel, ran her tongue across his chest.  One time while comparing cubits, she stopped and pointed to a pale scar above his elbow.  “How’d you get this?” she asked.

“What’d you do?” she said, kissing the scar.

“Something my father told me not to,” he said and looked out the window.

She left it at that.  She’d seen the old picture in his wallet: Ian as a child with a man, painting a wall.  The man had bright paint on his roller.  Ian pushed his clean roller along the carpet.  “Is this your father?” she’d asked.  Ian nodded.

“I bet you’re a lot like him,” she’d said, batting her eyes.

Ian had shrugged, tucked the wallet under the mattress and rolled over to sleep.

Months later, they were walking down the sidewalk and Ian bumped into a man carrying a package marked FRAGILE.  The box fell, something shattered.  The man cursed and shoved Ian.  Ian clenched his hands.  He’d never been in a fight.  He wasn’t aware of the proper fist.  He tucked his thumbs under his fingers.  The man noticed, calmed.  “You’ll break your thumbs that way, dummy,” he said, walking away.  Ian blushed.  Marie looked down the street and watched the way traffic started and stopped.

She moved out west to try her luck at singing.  She said she couldn’t get those fists out of her head.  Ian puked after finding one of her hairclips in the medicine cabinet.  He was a janitor at the mall and called in sick to work for a week, skipped bowling league.  The medicine cabinet mirror made it all worse.  Pieces of his mother stared back.  So did pieces of someone else, pieces that became less specific everyday, less genetic, more generic.  He gained weight, felt a pulling down.  His fists grew rounder and softer.  He ate in bed, staining the sheets.  He took the laundry to the cleaners and wondered if they could tell what had happened and, terrified, he never picked them up.  Instead, he bought brand new linens.

It was sometime after the storm.  Things were being weathered.

Marie came back.  Her middle, ballooned.  She put on weight, too, he thought.

Ian rubbed the back of his neck, “Is it mine?”

Ian put a hand to his lips and pushed his mouth around.

He watched her, one and a half now.  She showed him the sonogram, and he saw a little white smudge and maybe the same big forehead he looked at in the mirror each morning, the forehead his mother did not have.  He looked at the smudge closer.

He looked up, then reached out and touched her stomach.

She placed her hand on his stomach, “Ian, you’ve let yourself go.”

So he started running.  When Marie stopped by, Ian rubbed lotion on her belly.  She had new songs to sing him, lullabies.  He thinned, his features regained their shape.  A jaw line, a waistline, an old hairline fracture scar.  By the time the baby arrived he’d nearly lost all the excess weight.  Marie dropped the child off and Ian held it in the crook of his arm.  It fit perfectly there.  Its little backbone, the same length as his forearm.  One cubit tall, he thought, Such a tiny person!  Whenever it made tiny fists Ian untucked the thumb and placed it outside the other fingers.  The child squealed and cooed.  It weighed almost nothing.  It would never weigh this little again, he thought.  The earth would just keep pulling, demanding.

But he could help bear some of it, he realized, cradling the child, palming the back of its fuzzy head.  His funny bone tingled.  The damaged ligament had been repaired but still the arm never fully straightened.  It could turn and bend like everyone else’s but the shared weight of the child was enough to stretch that ligament, open his joint, and extend it.

Later, his doctor gave thumbs up to his waist, his loss, checking the strength of his heart through the stethoscope.  “You had me worried there for a while,” he said.  Ian stood in his underwear.  His elbows jutted away from his body.  The doctor said this was a deviation.  He described it as a pronounced carrying angle.  Some people were born with it.  Sometimes it occurred after a childhood incident, an injury during the developmental stages.

“But what does it mean?” Ian asked.

The doctor shrugged.  “If anything,” he said, “it means you can carry more.”

Zachary Tyler Vickers has appeared in KGB Bar Lit Journal, Waccamaw, The Emerson Review, H_NGM_N, and elsewhere.  He's the recipient of the Richard Yates Prize, The Clark Fisher Ansley Prize, and is a finalist for The Evans Harrington Grant.  He's completed a collection of stories and is at work on a novel.