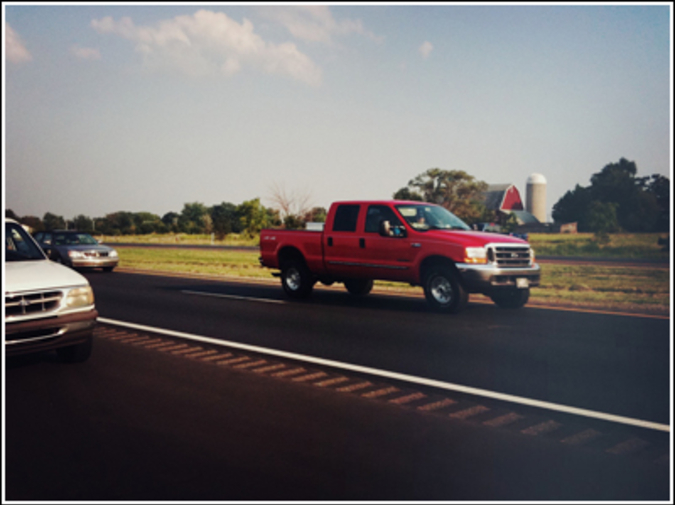 It was terrible the way we were fighting, Janine saying how many other girlfriends of yours are going to call me, pulling out the ashtray and stubbing her Doral cigarette and I said none there’s no other girlfriends not even her, all the while trying to steer in a swamp of rain the windshield drowning in water, we had no business to be out there in our Dodge that leaked through the roof and doors, so Janine said you mean Liiiiza sliding the i all through her mouth and I had no answer for that just busy steering, and finally I asked what in hell did she say to you anyway, grey balls of rain landing hard in the shallow lakes that had formed on the highway, water gusting up either side of the car as I drove through and us getting wet because of the leaks, so Janine opened her mouth again with Liiiza just explained how you met at Safeway where you both happened to be buying Ritz crackers that’s a laugh you call them Shitz not Ritz, but I shut off listening beyond the noise of the storm and the car until she said can’t you hurry I want to be there when he opens his eyes, and the big reality was that I was practically swimming the car through these goddamn lakes and a drip fell from the roof above me and ran a cold streak behind my ear, which brought that word to mind that I couldn’t stand:crushed, it’s what Kerr’s supervisor told me on the phone, the something wordwordword crushed legs and I didn’t hear much else it was my only son he was talking about—all I could think of was bones my boy’s bones in splinters, fragments, even ground to powder like white sand over the ground without any blood just the crushed crushed stuff of his body—while Janine said the operation’s probably over by now although it couldn’t be yet and she didn’t have any tissues, just rubbed her eyes on the neck of her blouse then blew her nose into it, patted her blouse down again and lighted up another Doral, after a while saying she told me you gave her a necklace with a real pearl I think she expects you to marry her what about that, but I was concentrating on handling the wheel just making progress toward the hospital in Olympia, everything outside the ripest green I was sure but I had no time to look anyplace but the highway, I remembered thinking construction was a decent job when Kerr started into it, I should have said hell no you’re going to work indoors or on a garbage truck, fishing in the sea or selling computers anything else so that I finally had to switch and say to Janine what the hell did she call you for anyway she’s just someone I had a drink with, one or two lousy drinks and there were no Ritz crackers but Janine said ha! that’s not what she said and I think she’s trying to get me out of the way, then she blew out her smoke right toward my nose, the mahogany smell like brewing coffee or logs in the fireplace so even though I quit three years ago I felt like having one oh god I wanted one but the big reality was there was no chance with Janine in that mood and I drove on slower and slower, thinking what a surprise Kerr was Janine and me being on the stumpy side and despite that him so tall, somebody that beautiful came out of us I always thought so even when he was pissing me off, and how he used to like car toys and trucks better way better than hammers and nails even real ones so whywhywhy didn’t he go into auto mechanics or long-haul driving, while I kept nosing the Dodge on its way and there in front of us I spotted a car one of those little Chevettes mired in the roadway, up to its door handles in water, I slowed way down barely creeping and you could see the poor bastard standing on the verge sopping wet—it could have been us—talking to a State Patrol that had pulled up behind, I kept going creepy-crawly right around that inland sea that lake of the highway without even thinking about stopping, realizing how dark the sky was and miles to go, Janine having quit talking to stare at the Chevette but now almost half-hearted she said did you ever buy me a pearl necklace never and before I thought it over I said that I would I would do anything, the big reality coming over me that only one thing mattered and we rode along that way, the sky going from purple-gray to almost black, and pretty soon Janine set her cigarette in the ashtray leaving it still burning and her hand came down onto my thigh, quite lightly but I felt the heat of it and a slight dampness while the tires roared over the wet pavement and a sign told us fourteen more miles to Olympia and all I could do was strain toward the drowning window glass, trying to see what was ahead.