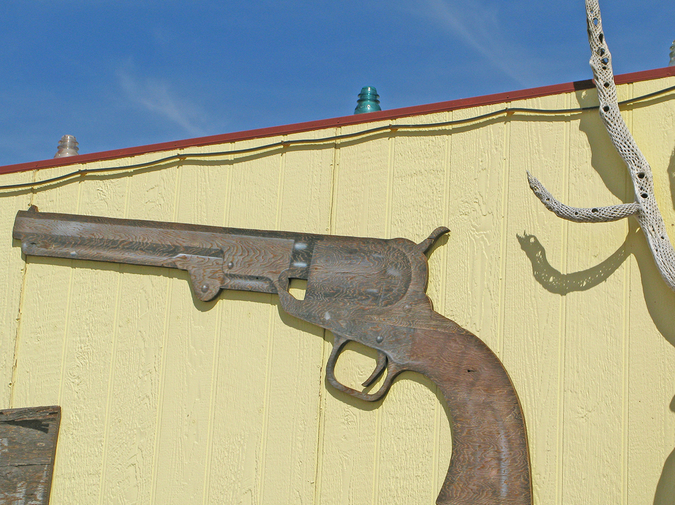 Susan bought a gun that shot doors into things. The doors were small and led to incredible places.

She could shoot a door into another door and then both doors would lead to somewhere different. Like, the front door of her house led out into the world outside of her house, where there was a street, a mailbox, some grass, some rocks, some garbage, and some other houses and other mailboxes and other patches of grass and rocks and garbage. But the door she shot into it opened up to Alaska, to the inside of an apartment complex's front office in Anchorage.

Susan climbed through the little door. Didn't look like she'd fit, but she knew better than to trust her instincts about stuff like that.

Anchorage seemed better than Rochester, so why not.

One time she shot the gun into a tree and it led to the other side of another tree. Once she shot it at a bird and a whole mess of organs much too big for the bird leaked out all over the tree branch. Door led to the inside of a moose or something.

“How much for an apartment?" she asked the guy at the front desk.

“Seven hundred a month. Includes all utilities 'cept for internet."

She walked around to the back of the building. Wind was blowing, cold and wet. She shot a whole bunch of doors into the ground – bang! bang! bang! – until she found one that opened up to a wad of cash tucked in someone's bottom drawer. Two grand, easy as pie.

The apartment was a one bedroom with a window that looked out over the bus stop. There were always the same people there, waiting for the bus. Going to work, going downtown, going to visit their families. Why Anchorage? Well, why not? Everyone's from someplace, and most just stick around. Not everyone has a magic gun. Susan did though, which made her special.

She often thought about how she wasn't actually special, because anyone could have bought the gun and be just as special as she was. No one thinks the drunk who bought a winning scratch off ticket is any smarter or more handsome or nicer than anyone else. They just call him a lucky son of a bitch and daydream about how their own scratch-off tickets might make them special one day.

Susan didn't choose much about her life, but she did choose to buy the magical gun.

There wasn't much to do in Anchorage except drink and try to warm up and watch TV in her new crappy apartment. Booze was cheap and the air was salty, but the rest of it looked a lot like Rochester. Same shitty kinds of bars, same shitty coffee. Just more pictures of crabs everywhere and more beautiful, glorious mountains on the horizon. The mountains in upstate New York are more like dirty little mudpiles compared to the mountains in Alaska, she thought.

Pick any point in Earth and odds are that it's not your kind of place. Maybe no one speaks the language, maybe the food sucks, maybe there's nothing but a bunch of giant snakes and diseased swamp water for miles around. Most of the Earth is covered in ocean, infinite and terrifying. Some of the land is as dry as a bone, equally infinite and terrifying. And some of the land is radioactive from old nuclear bomb tests. Other places are just full of dead bodies, like cemeteries and mass burial pits in a war-torn African border town.

She kept wondering whether there was someplace where dead people might still go on living. Like an alternate dimension or a different planet, or a special room in a church somewhere, where God decides to do a miracle every once in a while for his favorite disciples.

She wondered whether she could shoot herself in the head, open the little door it'd make, and pull out a new brain, a happier, healthier, smarter, kinder, better brain. Take it to the doctor and ask to get it implanted. Or climb through one of those hundreds of doors that look out over the ocean, dark and deep. Just sink to the bottom and never come back up for air.

Zac Smith lives in Boston, MA. He likes to walk his dogs.