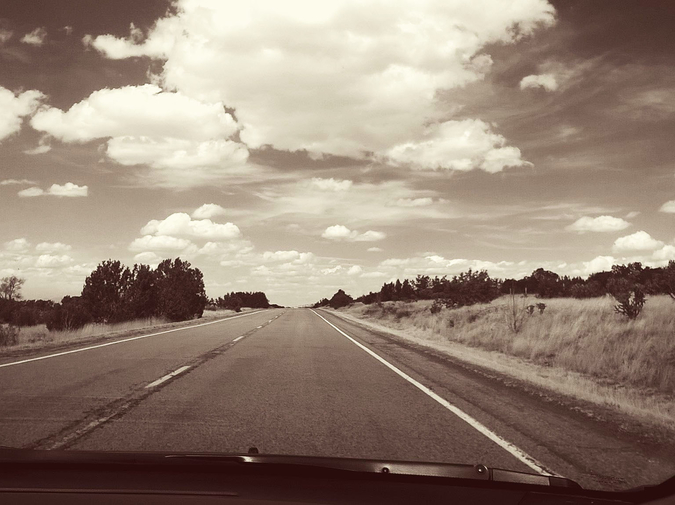 Down by the creek lie the stubborn bones of a baseball field. The pitcher’s mound juts up intact, if softened, but the foul lines are bleached out, baselines muddy and overgrown at the edges. At first, you ignore the field and skip rocks across the water that runs past the first-base side, neat little sidearm snaps of the wrist rewarded with three or four perfect hops.

Your arm’s okay, but Aaron’s is better. He played on the baseball team at school until he broke his ankle – just a freak thing, sliding into home. Once he was forced out of it, he said, he realized he didn’t want to spend the rest of his time in college beholden to a coach and a workout schedule, anyway.

But he misses it. Not the schedule and the drills, but the sun on his bare neck and the rhythm of a double play. You can see it on the bank of the creek where you’re drinking Rolling Rock, when he twists around to look out over the field behind you. He looks at the grassy, vanishing basepaths the way you’re afraid you look at him, heart hurting for a gap you don’t know how to cross.

Thursday afternoons, you both get out of class at five. Now that the days are stretching out, sunlight getting careless with its affection, you have time enough to get in Aaron’s car and drive off campus, into the hills, down to the field by the shallow, narrow creek.

Under blankets, a beach chair and some magazines that never got recycled, in the trunk of Aaron’s car, there are two baseball gloves and a ball. His old glove is too big on you, but you fit your hand into it, pound your other fist into the palm to loosen it up.

You throw each other ground balls, easy at first. Then he makes you work harder, forcing you to dive and slide, and you come up throwing. You’re barely back on your feet before he gives you another, making you reach to your backhand, and you’re both laughing. You leap into the air and throw across your body, seeing Derek Jeter on the TV in your parents’ bedroom when you were a kid. When the ball lands square in his palm, you feel the pop in your chest.

You arch a high fly ball into the air, make Aaron run back for it just so you can catch your breath. While he runs, you think about how long it’s been since you stepped on a baseball field. Your chest fills up with sharp fragments of Little League afternoons, standing in left field praying for something to do and dreading it at the same time. Aaron snaps you back to the grass where you’re standing with a throw on the money, straight and true.

He’s told you before where he grew up: some small town in Georgia, you forget the name. Come to think of it, maybe it was South Carolina, somewhere humid and inland, far from the beaches. You never remember, and he laughs and rolls his eyes, says you New Yorkers think DC’s the Deep South. You point out that you’re from New Jersey, and he says see, now you know how I feel.

When you’re with Aaron, you usually talk too much and too fast. Now, you’re both too focused to say much. You draw an “oh!” from him when you make a throw from your knees, and it’s worth the cold mud seeping into your jeans. You laugh when your throw to him takes a wild hop and he grabs it with his bare hand, startled and instinctive.

The sun drifts down on the two of you. Crossing the outfield, toward the parking lot, you’re loose and warm, and you bump into each other every couple of steps. When you got into his car earlier, his jaw was tight and his hands were hard on the steering wheel, even though he smiled when he looked over at you, listening to you talk about the bird that flew into your apartment this morning. Now he gives you an open-mouthed smile, the kind that doesn’t care about covering up his crooked front teeth.

He would never relax like this around you if he knew. If you’ve learned anything in your life, it’s this: you can have almost everything, smiles and casual arms across your shoulders in a crowded bar booth, knees bumping against yours carelessly. Or, if you say something about it, just to let out the pressure mounting in your chest, you can have nothing.

Sunset casts his face in warm light, turns the dark blond stubble on his cheeks golden. You stretch in the passenger seat, your right arm aching pleasantly and your body humming. The ball you’re still holding is smooth and unyielding in your hand, and you tick off the stitches to distract your fingers, his glove sitting in your lap.

Annie Maroon is a Pennsylvanian living and writing about sports in Massachusetts. Her work has also been published at The Classical and Matador Network.