April 9, 2021 Dispatches from the Treehouse, BASEBALL

Dispatches from the Treehouse: The Cutout Year 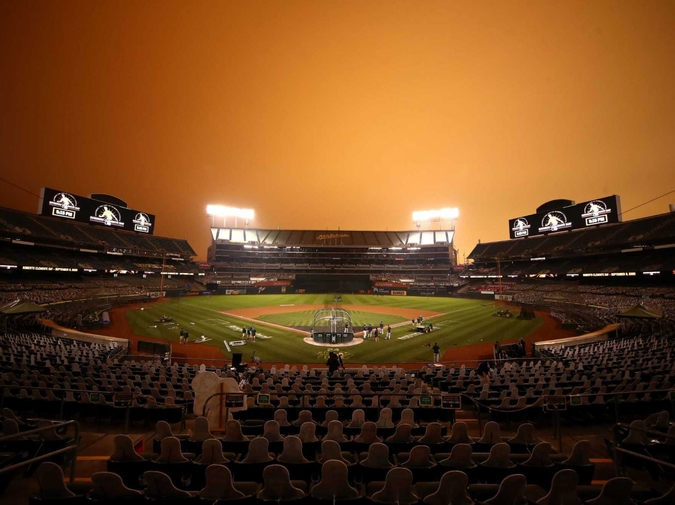 Returning to the third dimension

Last year, Tim and I bought cardboard cutouts of ourselves ($129 each, apparently for charity) that watched every Athletics game in the stadium that we could not. They sat in the fancy field level, tickets too good for our human selves. We watched for them on TV from exile. After inning and inning of careful self-obsession, we got to know the other cutouts too: Sunglasses Screamer, Giant Chihuahua, Section Mother, The Punisher, Young Joe; even the full-body mockup of Tom Hanks as a hotdog hawker, a neat A’s PR trick calling back to one of his earliest jobs when he was a kid from nearby Concord. In the cutouts we imagined the community we lacked. But in true pandemic form, it was our own creation: nobody talked back, none of them challenged their backstories. This was our mall full of mannequins, our tea party of stuffed animals. When we realized that, due to an administrative error, Tim actually had two—one with his new dog Toby and one with the puppy unceremoniously cut out of the cutout—he started referring to The Tims; his doppelgängers who might, headed to get a phantom beer or a pretzel in these empty corridors, meet each other and quickly decide to fight to the death.

In what passed for real life, we also made a point of watching the games together wherever we could. While our cutouts watched the A’s stomp the Giants 15-3, we ate outside at a restaurant across the street from the stadium in San Francisco, outlasting all of the hometown fans who grumbled away we’ll get you next year, presuming there would be one. We thought we’d be able to hear something from the stadium, but we couldn’t—that noise comes from fans, from people, not the game itself. As our cutouts watched the A’s lose to the lowly Rockies, my birthday party along our private paradise, the gay and methy Russian River, became a surprise baby shower. As our cutouts watched the boys win their ninth in a row and Ramon Laureano charge into the Astros dugout because of a comment about his mother, I saw my mom and sister for the only time in person last year as we drove 800 miles to meet them in the easy-to-distance beauty of Capitol Reef National Park.

But for those of us who did, we often did nothing more than survive the year. We endured the pandemic and policing and politics. Cutouts watched an empty field when the players walked off in protest on Jackie Robinson day. Some stadiums allowed fans back at the end of the season while others didn’t, the divides of truth and health so visible again: the masked fans, their justifications inscrutable, judged by the smiles of our unmasked deputies. While our cutouts sat in the Coliseum under Mars-red apocalyptic fire skies, their flat faces dusted with ash, we all watched a stadium full of our baseball Dorian Grays making us look as exhausted as we felt. In just 60 games, California had its fires and the rest of the country burned too. Sitting near a stranger for shared enjoyment stretched into memory, a risk possible only by proxy. And baseball, barely, went on. 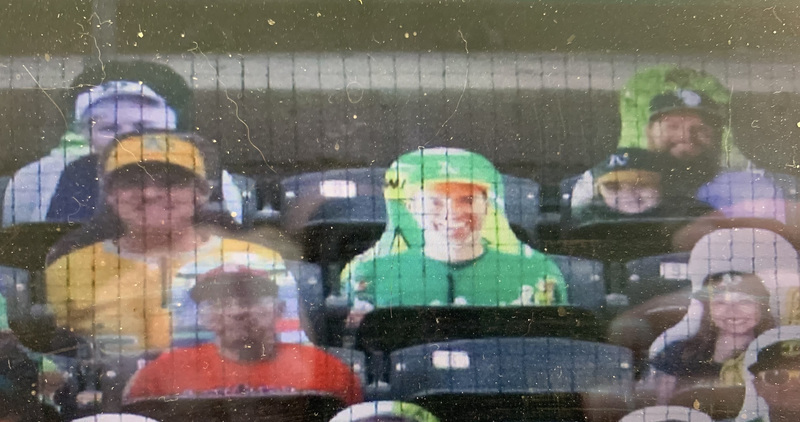 There have been 156 days between last season and this one. I was at the last live game played at the Coliseum 547 days ago in October 2019. Our son Milo, born in November, is 138 days old. He is not with us today but will be soon. It has been 33 days since I paid A’s leadoff man Mark Canha $40.99 to record a Cameo for Tim congratulating him on his new job teaching middle school in Oakland. If this last year has taught me anything, it’s that you need to make the days distinct. Time passes on its own, but it only sticks if you make it.

Oakland is in the orange tier of its reopening, and there are a little more than 10,000 fans here for Opening Day. The joke almost everywhere is the A’s will see little difference. That doesn’t feel true tonight. There are more people than any of us have seen in a while, and with the distancing, the whole stadium, every section, is dotted with fans. The seats between us are still a comfort and a transition back to the world. Kate, Tim, and I are fully vaccinated; Tim’s boyfriend Evan has had his first shot. It feels right for what we all should feel, both invincible and aware that everyone isn’t. We look at our fellow fans—live, in person, a little less alien every time we pass—and wonder who has had what. Tim and Evan grumble about the slow line for parking. It’s slow because half of the massive Coliseum lot is still being used as a mobile vaccination center.

The Treehouse itself and all other gathering areas are closed. We must order food and drinks from mobile apps. We have no trouble, but picking up our beers it is evident that we are the only ones. A true dozen people ask us how in god’s name we’ve gotten anything; one jokingly(?) says he’ll pay us $200 each. This, too, is fitting for a year in which the internet became a flawed necessity for school and work and food and vaccines. We walk past the glowing pods of people on their phones, milling around each other at a distance, waiting for notifications that will not come while the concession lines stand empty.

The only real winners in the pandemic were the Houston Astros, whose sign-stealing cheating scandal came to light just before everything shut down. They’ve not yet received their punishment from the fans or the pitchers, and Chris Bassitt beans Carlos Correa to the joy of the assembled. We sing in the seventh inning stretch, we play the silly games on the Jumbotron, we watch the sunset give way to the lights. You can watch baseball anywhere, but there’s the stuff you can only do here.

The A’s will go on to lose their first six games, tying a franchise record for early season futility from 1916, when they were in Philadelphia, during a war and just before another pandemic. They will save their magic for the very end of the homestand, the tenth inning of the last game, before a Mitch Moreland single drops and Mark Canha races home; Kool & the Gang comes over the speakers and the fans, who need no reminding, are reminded that no misery lasts forever.

Joseph Horton teaches at UC Davis and Berkeley. He graduated from the Zell Writers' Program at the University of Michigan, and his fiction and nonfiction has appeared with Ploughshares, Colorado Review, Joyland, PRISM international, TIME magazine and elsewhere.