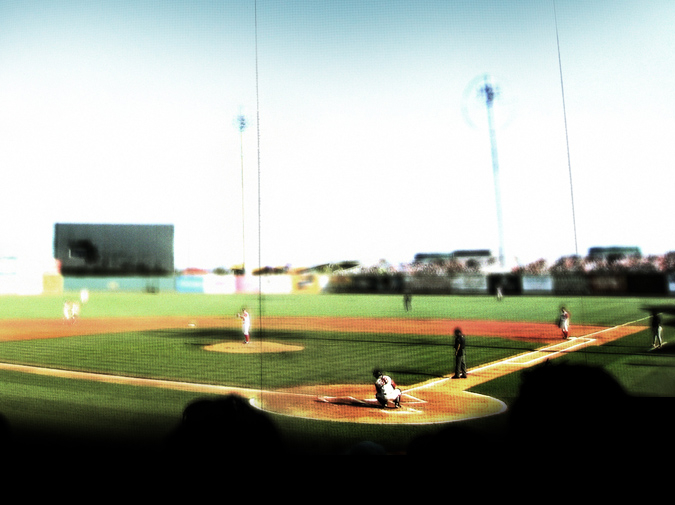 François was working on a baseball campaign, the design and effects for it, two thirty second spots and a sixty, and fifteens cut down from the thirties. The director and his producer, on the couch at the back of François’s room, were on the phone most of the afternoon arranging the director’s next shoot. By six o’clock they had dinner reservations. The receptionist phoned—their car was downstairs. Behind François, the bag-rustling end of the workday—their workday—quickened and zipped shut.

He swiveled from the effects console. “Before you go.”

“Talk to me.” The director was already by the door, thumbing his phone. His producer at least was still seated. The clip paused onscreen was, François had to admit, superbly conceived, thirty seconds’ drama in one frame: a pitcher winding up, and behind him the foreshortened distance to first base, where François would composite a clip of a base stealer.

François traced a pitcher’s mound and baseline in air. “I was thinking in this scene we make the depth of field very shallow, so the distance the pitcher is thinking about is a thing you feel, the heat of it, the heat between the runner and the pitcher. In the defocus, you see the runner and he is a mirage.”

“You’re putting crowds in the stands?” The director clicked his phone into its belt clip.

“This spot is about the summer everyone remembers never getting. I want them to see all the people who did.”

“Absolutely, yes—the crowd is how we know this of all pitches is the important pitch.” François rotated his pitcher’s mound and baseline for the director to see them from all sides of the ballpark. “The crowd is so quiet, you see the smallest things. You watch for the runner and you see the hair on the arm of the pitcher. Almost, you feel you are the space and the pitcher moves through you.”

“That”—the director slapped the wall—“is why we hire François. You feel you are the space—goddamn.” The director pointed around the room until he aimed at his producer. “We got a close-up of the catcher’s glove?”

“Can François make one?” The producer seemed to find the idea a treat.

“We can arrange it.” François would have to have an assistant buy a glove. He would photograph it himself. The director wouldn’t notice the source or care about François’s method if the glove showed well.

“Hot.” The director shouldered his laptop bag. “I’m feeling that leather. Smack! I got the catcher’s signal and I’m slamming the ball in, low and outside. The batter thinks he can pull for it, but no way, man—”

The producer slid the smoked rear door shut behind them. Tinny in the long hall to the elevator came the receptionist’s hoots that she knew, right? The elevator must have been stopping at every floor except theirs. But in the room behind François twilight was unoccupied, and pulling his chair to the console and sweeping the pen across his drawing tablet, in the faintest leather scent from the couch and leftover from the producer’s bag, he was piloting the company, the building at sea in Manhattan, Manhattan anchored at the rim of immense horizontality and heat, a continent of ballpark afternoons.

Tap, tap on his tablet. Two clips, overlaid: pitcher, and runner and umpire. Frame by frame the pitcher went from smudged shadow into windup. Behind him, for the moment half-transparent, the base runner flared from focus into sweat jeweled on grease paint and the first base umpire’s watch face flashed. The camera operator had pulled focus ten frames early. And the light was wrong, bluish clear, early morning warm-up light filmed weeks after the director had filmed the pitcher at midday and trusted backgrounds to an assistant, who—the director had said—would be fired for forgetting them.

François copied and reversed ten frames of the base runner stepping sidewise and spliced the reversed frames to the front of the clip. The runner stepped from the base, tagged, stepped off. The pitcher noted the runner’s intent and had a sixth of a second to decide where to throw. Boost the whites of the runner’s uniform; add a second layer, dip the runner’s face into shadow. A sure hand, light taps, samurai grace, precisely the pressure necessary. Layer a third copy of the front of the runner’s cap where the sun would strike from over the upper decks, blinding the runner, blowing out the cap to absolute white, by the reckoning of a camera with light levels calibrated to the pitcher’s stubble cheek. Process and play the composited clip—no sync. The runner must have been filmed with a camera locked in place. The framing on the pitcher had a live drift François would have to track and attach to the runner. He would have to bend the runner to match the pitcher’s yaw. The defocus would obscure it. Reprocess, then check for artifacts, stray pixels out of gamma, dithered colors, colors needing crushing, then archive, always, after every work session. In the morning the shot would appear as it should, and François would show the director and the producer how he had saved them.

Sarah Malone’s work has appeared in Five Chapters, PANK, Parcel, The Awl, The Collagist, The Common and elsewhere. She’s working on a novel from which this story is adapted.