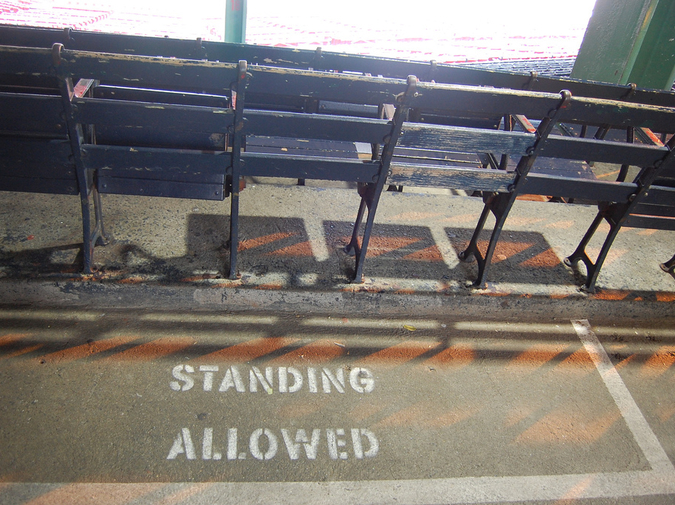 Ten years removed from my youth baseball experience, I find myself in a car with four baseball-obsessed college buddies, headed toward the Hubert H. Humphrey Metrodome to see the Minnesota Twins play a mid-September game against the Detroit Tigers. I have no idea why I’m here.

“Oh, the Twins… Yeah, my brother says Joe Mauer’s pretty good.” When the discussion turns to Minnesota baseball, such is the extent of my contribution. Since I’m not from Minnesota, I must be off the hook—the only reason I can fathom why despite my total baseball ignorance, I’m included on this excursion.

And I’ve agreed to attend because… well, because these are the first people to tell me I’m welcome at a major league ballgame. Which I guess remains to be seen—are you allowed inside the ballpark if you can’t catch? I envision park officials lining everyone up just past the turnstiles, then handing them each a mitt for a game of catch. Drop a ball and the umpire bellows, “Yur outta here!”

As we make the drive south, I listen more than talk, and gather that the Twins sit three games back in the race for the division title, with 15 left to play. They shut out the Tigers the night before, but today Detroit will be starting Justin Verlander on the mound, one of the best pitchers in the league.

We enter the stadium (uneventfully, to my silent relief) and take our seats in the left field stands as I soak in the ballpark atmosphere for the first time: thousands of Twins fans swarm throughout the stands, revved up already; the roll of thunder precedes the lightning bolt for once. While Metrodome history is lost on me, I do know it’s one of few indoor ballparks in Major League Baseball. Its gray, billowy roof carries an “only in Minnesota” quality. In fact, its alien nature feels akin to my own estrangement from the game. The Teflon ceiling suggests Minnesota wasn’t made for baseball—and I can relate. I wasn’t, either.

Ask baseball fans about the origins of their fandom, and they’ll regale you with nostalgic tales of sandlot games, family outings to see their favorite team, and regrets over trading away a Mariano Rivera rookie card for a Chuck Knoblauch. As a listener, I soak in these stories with a polite smile and humble silence, for I have no personal equivalents.

I played baseball growing up, but was never a kid who knew baseball. My dad was an athlete; my not-much-younger brother was an athlete; my duty was to go out for sports. That doesn’t mean I followed sports. Impromptu home run derbies with teammates always filled me with dread.

I’m at a loss to name a power hitter.

The final note of the national anthem still rings in my ears as the Tigers take the lead, up a run before the Twins have even touched their bats. But in the bottom of the first with two outs, Joe Mauer answers with a towering home run to the right field upper deck. Adrenaline pulses through me as I watch the ball sail into the stands, a no-doubter I appreciate both for the physical prowess required to create it and for its timeliness in leveling the score.

In the third inning, Detroit drives in another run, and their 2-1 lead holds as the game moves into the middle innings. Despite the lack of new runs, the talent of these players amazes me, whether it’s Detroit second baseman Placido Polanco’s swing that launches a ninety-one-mile-an-hour fastball back toward the infield or Twins third baseman Brian Buscher’s fielding as he gloves that ball and makes the throw to first, beating Polanco in the time it takes me to chew a bite of hotdog. This isn’t Little League anymore.

In 5th grade, I am an Oriole. My dad is head coach of our youth baseball team, my brother a fellow player. The season is joyful enough, though my joy tends to come in socializing with teammates and basking in my father’s company rather than in performing on the field. In truth, while my friends might revel in opportunities for personal glory, my stomach lurches whenever I become the focal point of parents’ gazes and teammates’ hopes. Worst of all are the routine plays—the ones everyone expects no one to miss. Striking out’s no big deal; it happens to everyone. But the loathsome error? Nothing makes you want to dig a hole just beyond the foul line and bury yourself in it like the official scorekeeper recording for all to see that you’ve cost your team an out.

One night partway through the season, my dad sits at the dining room table reviewing surveys he’s given to parents of players on our team. He is a meticulous information-gatherer—for a youth ball coach, he keeps abnormally detailed batting statistics. I don’t know what these parent surveys are all about, but, curious, I invent an excuse to speak to him.

“Isn’t it past your bedtime?”

“How come the seventh-inning stretch happens in the seventh inning? Why that one?”

It works: he chases my curveball. As he orates on sit times, Harry Caray, and the proper pluralization of Cracker Jack, I glance down at one of the forms. A parent has penciled a note in blocky letters at the bottom of the page: “Put someone on first base who can catch.”

This is the last season of baseball I ever play—at first base or anywhere else.

We move past the seventh-inning stretch and Verlander’s pitch count climbs, but the Twins can’t drive in that tying run and I know their odds of winning are evaporating. Every time the Twins muster a baserunner, the Metrodome crowd rallies, and the megaphone effect of the enclosed space envelopes me in a cacophony of cheers.

The bottom of the eighth arrives with Minnesota still down by one, but Verlander’s pitch count has reached 115. With one out and a runner on first, shortstop Orlando Cabrera steps in and knocks a routine pop fly into left field. I watch Detroit’s left fielder take a casual step forward… then issue a panicked shrug and I know he’s lost the ball in the Metrodome roof a full second before it drops to the ground. Routine play: botched! Everyone around me’s on their feet screaming at the top of their lungs, and I suddenly realize I am, too. We cheer in celebration of our two baserunners in scoring position, our jubilant cries growing ever louder as Minnesota’s hero, Joe Mauer, strides toward the plate.

“Are they pulling Verlander? They have to pull Verlander!” one of my friends shouts. Verlander himself slouches near the back of the pitcher’s mound, in no hurry to throw the next pitch.

Then he steps up to the rubber.

“Why are they leaving him in?” I ask. My confusion subsides as he intentionally walks Mauer to load the bases.

Then the confusion comes roaring back as Verlander stands behind the rubber, staring toward the Tigers’ dugout for a long 10 seconds before reclaiming the mound. With 125 pitches thrown, Verlander turns to face Twins right fielder Jason Kubel, a left-handed hitter.

The crowd’s already exploding, and my friend is screaming, “They’ve got a lefty ready in the ‘pen! What the hell is Leyland thinking?! Kubel’s Punto against lefties!” (Referring, I would later learn, to Twins second baseman Nick Punto, who would bat .228 on the season.) The rival manager’s error of judgment shines like a beacon in the left field stands, even if it hasn’t occurred to anyone in Detroit’s dugout.

Verlander puts a ball and a strike on Kubel, then unleashes his 128th pitch of the game—which Kubel turns into a bloop single into left that drives in the tying and then the go-ahead run—and now I’m losing it, high-fiving strangers and going hoarse, although it’s hard to tell exactly what I sound like over the unified howl of the crowd.

The overdue pitching change occurs, but it proves futile as first baseman Michael Cuddyer smacks a three-run home run to center field, padding the Twins’ lead to 6-2 and all but guaranteeing victory.

The score will hold, as will my newfound love of baseball. The Twins’ postseason that year is short-lived, but it doesn’t matter: I’ve already discovered the love of the game as never before. In that afternoon match-up with the Detroit Tigers, I understood the rush of witnessing dazzling performances as a member of a massive crowd, taking in those improbable achievements together and finding camaraderie in the shared experience. The eyes of the crowd led to my initial disgraced exit from baseball; a decade later, they led me back to the game.

Aaron Sinner lives St. Paul, Minnesota, and has previously written on health policy for the think tank Minnesota 2020. He is a diehard Twins fan.

Caryn Rose is a NYC-based writer and photographer who documents rock and roll, baseball and urban life. She hates bunting and the designated hitter, and believes you should never, ever walk the pitcher.