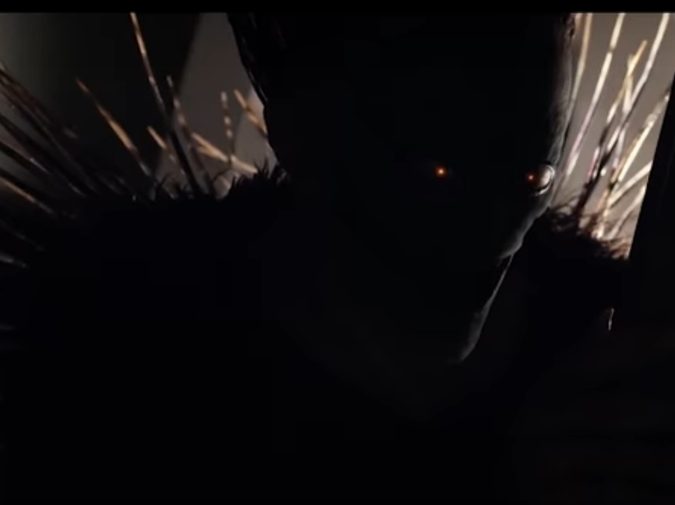 This is how bleak life is: the gods are available on demand. No need to channel-surf. Take a fistful of deities, shove them past your fillings, chief. The world is yours within pissing distance. But unraveling your poison clutch upon a potty water becomes quite difficult with age. You may already have to barter with the wallpaper to find completion.

What we do in this country is we labor under the bald-assed supposition that anyone not pounding their chest at our same volume is asking to be pitied and deserves a blowtorched nudge toward the banausic. A land where the prematurely tubby out-yap the unforeseen agony of their pets on a nightly basis. Violence is the only thing we got right, and, even then, that’s just because violence is the only answer that seeks you out, but these people who go through with shooting up a crowd are as overperemptorily pretentious as any protester waving mace. The damage will never be enough. Worse, it will be the allotted amount of damage.

Death Note was not about revenge fulfillment for nerds, because the main character was a type of male who cannot exist in American culture. A genius women worship, he excels in studies and at sports and dominates every situation with a cool, well-rounded benevolence. Giving him the power of a death god is almost a footnote. I’m not saying the American female couldn’t find a way to break this guy in five minutes, but the Japanese female, according to the culture of the anime, was not particularly trying to demerit anyone, but the show was made a decade earlier, before the planet sicked itself with backlash. This is how you pitch Death Note to the states: (Keep the good director and Willem Dafoe. Keep the extra gore and 80s trend music. It works. But give it a reason to work.) To us, Death Note should be Ferris Bueller grows up into Robert Oppenheimer. Destroy our myth of cool, because here it is truly just a myth. He’s an untouchably gifted hustler who stumbles onto the ingredients for mass homicide. He’s not emo below a bully and begging the (openly smoking during practice badass) cheerleader who defends him to please say hi. Jesus Christ! The only time Americans are cool enough to show real indifference is if art happens. The original show had much of the shocked gasp sounds peculiar to Japanese anime. Make whitewashing (of drawings, of drawings) funny if you’re going do it anyway and appropriate that. Play me a loop of these exclamatory wheezings, 'cause that's life now.

Pi was promoted as Eraserhead for the MTV generation, but Shinya Tsukamoto’s Tetsuo had caused 24-karat choroidal marring a decade previous. Pi was its own masterpiece, a meditative and staccato climb into an organoleptic Cocteau. Frenetic, but more cerebral, less a slug to the bowel than Lynch. Less a rocket launcher in the air that falls back to explode and that explosion causes roving cute but lethiferous chains of mini-bombs than the unmatched frenzy of Tetsuo. Tokyo Fist was like Fight Club for psychopaths on crack, it’s that fantastic, and Requiem for a Dream was Aronofsky’s Tokyo Fist, which rounds out this triple bill as fun, psychotic, and Selby Jr. level suicide feelings pummeling you into devastation. Hail Aronofsky, an immaculate director. Hail the new Twin Peaks and its bending the prestige, ultra high stakes extention of tiny plot details on TV into sublime pausal fuckery, same as how the original morphed soap opera melodrama into hyper-absurd intensity.

There is no critic capable of encapsulating Arnofsky's mother! and the hacks who milk that plot into a thousand words are sprinkling salad on their shit. It is everything, real art somehow at a multiplex, blah blah, a million perfect things in one film. Any review would have to be book length or the words holy shit over and over. I will try in my final fumble to end up another good ole summarizer with perhaps some bought tilt to my legislative aptitude. mother! consists of...mother! is about (spoilers): They grow up so fast it kills your heart to be revised into just another morsel and it's a world not worth making but we're looped in umbilically regardless of a thought, so sprain the locusts aware, baited by your panic because everyone has been warred through delusional carbon-copy protagonism and not even death can get you off this fucking planet, yet, shucks, prettiness exits - on repeat.

Spoilers: "You have to have a number of children murder you in order to feel justified to die," - Gil Orlovitz.

Imagine a public stupid enough to receive the original Texas Chainsaw Massacre solely as an allegory against eating meat (because there is a widespread, handheld, nightmare platform of social reward brownie points drawing a treasure map with your dopamine), a populace with such piss poor disregard for what they have just experienced in a theater versus what they pettily intellectualize afterward (including what the director/writer might say postpartum on his platforms)...well, here we horrifyingly are. If somebody plucks their tongue out and hands it to you for a present, the hidden message is: just take the fucking thing!

PS – Heard the silence loud and clear over the years, this (Party of Animals) Brodkeyian torque amplifying itself minor, this raping of my own stripper pole, up one's ass just enough to request directions etc., audience F far and wide, writing as gathering words from a thesaurus and layering them over an initial sentiment as it is forwarded to you inch by inch, paddling updated vocab editions hinged across a sweated arrangement, severely chopping that mass for time into a grammar you have curated, words or thoughts flinted together in preference – how snobby, nothing doing, big incomprehensible shrug, we can’t really call it English these days, not even a library would pick it off their sidewalk, couldn’t give away for free, no Victorian tenor allowed, because only our morals remain Victorian, and no content can be aesthetic, unless the new wave evangelism’s weaning. Good. Bowing to you, three readers worldwide! Stay in pain.

Barely a pinchful of literary journals are devoted to allowing artists free range with language under zero pressure of political whim or typical propagandist media-think, a gonfalon for art beyond the enforced and petty literary citizenship the internet has codified and will soon, I am certain, have entirely disappeared, scrubbed off its hindquarters, alongside all the vain efforts of my life wasted on words. Some of us remember that this operation with the page was always about destroying your fucking well-being to palpitate for the hell of it under no audience’s camel toe, some goddamn space to hang yourself above everyone’s supposedly scrupulous pabulum. Before we coax our social evolution so far ahead of biology that the traumatized radar for sensation mutes itself entirely and art turns into one long lecture, Hobart is of the few last beauties with nerve endings to spare. I thank them and very few others.

PPS – Watch Talk Radio again. It predicted the etiquette of the net. And so did Marcel Aymé's short story Backwards.