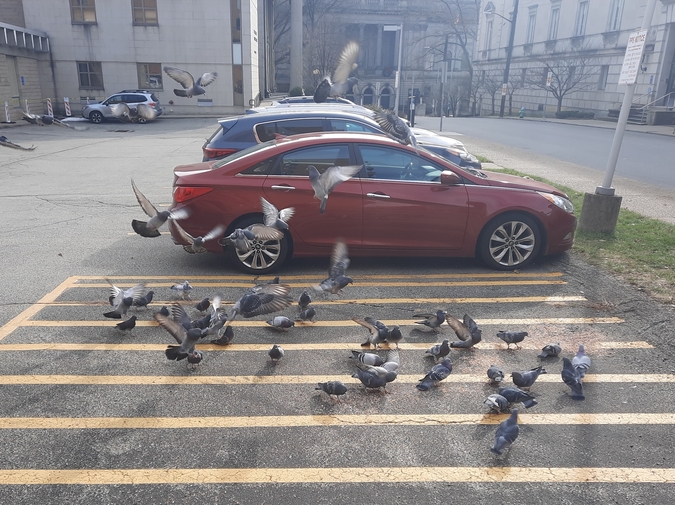 Kevin hates it when you leave the peaches on the counter, plump orange skin bruising when squeezed. You stare at them when you do your morning pages at 8A.M. like the productivity videos you watch, trying to describe the colors as you scrawl messy thoughts on the page. You find it ridiculous that all the shades of oranges are named after foods; it feels sacrilegious to describe a peach as apricot or cantaloupe or carrot or tangerine; even worse—salmon. At first, you try to describe them the way you would a sunrise, but peaches are too mundane and sunsets too majestic for this. In the end, you write some ugly sentence, not one you’d ever be proud of, but one that you wipe from your mind as soon as you set the pen down. That’s what you like about journaling 750 words early in the morning: there’s no expectation to make it poetic or beautiful. Because the peaches aren’t beautiful—they’re mottled, bruised, white mold forming speckling their skin already.

When the peaches first went on sale at the farmer’s market, you and Kevin could go through all the peaches in the week before they started to spoil, flesh numbing and decaying from the inside. Last weekend, Kevin bit into a peach only to find that the flesh had begun to rot. You balked when he tried to throw it away because your mother had always taught you to eat what you could, waste no food, but when you tried it, you agreed: it had to be thrown away.

You wondered if there was a way to save the peaches, press them into juice or pulp somehow, but you didn’t have the time. Or rather, you were both too lazy. That’s why Kevin likes to buy the crunchy peaches, the ones that are firm in the hand, not yet begun the process of softening and sweetening. Your mother taught you how to pick a good peach when you were young—how to identify the correct plumpness, the perfect coloring—but Kevin says that this is all wrong. He shops in bulk, with the expectation that everything that is bought is to last for the long run.

On Monday, he takes you grocery shopping, and you rummage through the stands together. Peaches are still on sale—a dollar a pound—and they will be for at least the next week, according to the ad you picked up on the way in. There are peaches stacked on top of each other, peaches rolling across the surface. Kevin explains that you need to pick the hardest peaches, the unyielding ones, the ones that don’t give. These will ripen over the week, lengthening their lifespan for a few more days.

The peaches spoil anyway. Next you try putting them in the refrigerator, but this, too, only gives a few days. In the end, the cold shrinks the skin and leaves the fruit desiccated. When you bite into the peach, it is dry, leaving an unpleasant dull taste on your tongue. Over dinner, Kevin urges you to eat more peaches—maybe peach salad, he says, peaches in your morning yogurt. You yell at him to stop eating the chocolate bark, which doesn’t expire until nine months later, and snack on peaches instead. He’s trying to eat more healthily, having convinced himself that switching from milk chocolate to dark chocolate is enough. You are too, but you have an unrelenting sweet tooth.

He’s annoyed when you zone out for a few minutes, saving away some phrase he said on your phone. Your notes app is a confused mess of lines that struck you randomly: half your own thoughts, half Kevin’s. Not because he’s particularly eloquent, but sometimes he says things that are striking and off-kilter enough to jolt your mind. Tonight, he has said something about blue whales. How the 52-hertz whale calls at too high of a pitch and cannot communicate with any others. How lonely, you think, it must be to sing a solitary whalesong and have no one to share it with. But you also think about the passage of time, how things must seem to move slower when in isolation. In this way, you somewhat envy it, envy the loneliness. You never seem to have enough time: you devour your meals in twenty bites, steal minutes of rest between errands and tasks. The peaches always rot before you can eat them. A 52-hertz whale, you think, would be able to eat its peaches in time.

If all the peaches are destined to spoil, then you are determined to savor what is good while it lasts. You put the peaches on the counter. Kevin moves them to the refrigerator, and you move them to the counter again. He moves them back. He says he is buying time. He likes to chase every small extra bit he can, but you are more impatient. You don’t have the time. Instead, you resent having to wait for them to ripen and soften.

When the morning comes, the peaches are still not ripe, but you take a knife and cut one into slices anyway—you are already so tired of waiting. The fruit crunches in your mouth, and you are only a little disappointed to find that the taste is not nearly as sweet as you’re used to. This is what small relief you take: in some way, you have cheated time, derailed the peaches on their path to ruin, and for this you are willing to give it up, the sweetness. You remind yourself to note this in your morning pages later, taking another piece of fruit. The coolness sticks against your throat as you swallow, and you wash it down with water before you can begin to choke.

Jennifer Chiu is from Memphis, TN. Her prose and poetry are published or forthcoming in Cosmonauts Avenue, Pidgeonholes, Rust + Moth, and elsewhere. When she's not writing, she can be found admiring the sky or listening to yet another one of her playlists.