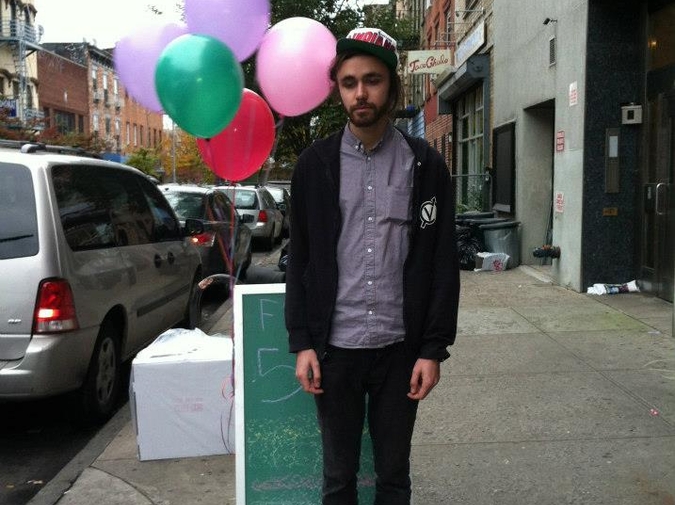 Ever since I can remember I've had trouble falling asleep.

When I took martial arts as a kid I placed second in nationals then quit before I got my black belt. When I was a little older I constantly told my friends that I could do skateboard tricks I couldn't do. I quit playing sports, telling people that it was "getting too serious" and "the coaches suck." I started doing drugs and drinking every day.

The first feeling I can remember having is fear, and it's still the feeling I experience most often, usually in a distant-feeling way, like it's happening to me.

Self-centered anxiety is my natural state of being.

In my weaker moments, I watch entire seasons of bleak shows on Netflix. I chain smoke and drink coffee. I eat entire large pizzas alone. I complain and write poems and songs and stories of and for my suffering.

It is a privileged kind of pain but pain nonetheless. My head and back hurt constantly and my thoughts race until I detach from my surroundings and eventually myself. When this happens it is hard for me to interact with other people or do anything productive.

In my better moments, I meditate and exercise and talk to people and eat healthily.

I become useful and alive. I get outside of myself and let the thoughts pass.

Noah said that we have hearts and lungs and kidneys and that they are constantly performing their functions, all the time, and that the brain is functioning too, and the brain's function is to produce thoughts, in case we need one. I think about this frequently. I like it.

I want to be a good person. Someone who is conscious of others needs and is able to help and be helped. An ever changing, always growing part of the universe - not the center of it. A friend, a son, a boyfriend, a brother. I don't know. When I think about socio-economic things and other things I feel confused and just want to be a better person in like, the ways I can be, or something...

When I was in rehab they put me on three different kinds of medication. One for sleep and two for anxiety. A few months after I got out of rehab I stopped taking the sleeping pills and one of the anxiety pills because they were making me gain weight. Some things I read online said that people who took the same meds as me once weighed ~140 pounds and now weigh ~350 pounds and can't stop gaining weight no matter what they do. I continued taking Neurontin, the other pill.

For the past year and a half, I've taken 600mg Neurontin 4x daily - one in the morning, one in the afternoon, one in the evening, and two at night. Four weeks ago I started weaning off of it, with the help of my doctor, taking one less pill per week.

I feel insane. Fear dominates my life. Fear of being inadequate, of being sad forever, of success, of failure, of being ugly, of being vulnerable, of what other people think of me, of not making enough money, etc. Irrational fears about things that are out of my control, the desire to control them, and self-destructive tendencies creep into my thought process and won't leave me alone until I meditate or go for a walk or stare at the lake or write or tell someone or something, and even then it only helps temporarily.

That's not true, I don't know.

I know that there is value in perspective and experience, both of which I am gaining more and more. And I know that I want to be alive, and since I don't want to kill myself, it's necessary that I continue growing, and gaining the discipline required to take care of myself, which is something I know I am capable of but frequently fall short of via laziness. I know that it is largely because of the Neurontin that I'm freaking out so hard lately. When I told my friend Matt about it he said "It doesn't matter why. It's all there anyway, all the time. Some things just bring it to the surface." I said "For sure" and we laughed.

There is nothing romantic about being young and dark and confused. Pain is real. It's funny on Twitter but it sucks irl.

In a book I'm reading by Thich Nhat Hanh he says nothing can grow without rain. Clouds, rain, darkness, are all necessary in order for growth and existence. Felt good until he got to the part about sunlight also being necessary.

It's been so grey outside lately it's hard to know what time of day it is.

There's a line in a poetry book I just read that says "let's enter the house of gratitude and help cook dinner" or something like that and I like it a lot.

Sometimes I hyperventilate and cry and can't move. Sometimes I wake up early and drink coffee and go to school and focus and talk to people and do nice things for people I love. Sometimes anxiety crushes me and all I can do is feel it. Sometimes the feeling of change is so real I can feel it in my body, and in those moments life feels new and exciting.

It feels important to me to try to grow into someone who isn't so obssessed with myself and my feelings. Earlier today I watched Netflix in bed. Later I worked on writing at the coffee shop. After that I told my girlfriend I was sad. We cooked quinoa with sweet potatoes, kale, cauliflower, onion, garlic, ginger, carrots, and miso then made raw vegan ice cream. My friend Evan is in town and has ben staying with me. We all ate together. My girlfriend wanted to watch a movie but I felt energetic and wanted to watch it later then she said she felt tired and was going to read in bed and when I asked her if she still wanted to watch the movie she said she probably couldn't stay awake for it and I repeatedly apologized for not having watched the movie earlier. She went to read in bed then I smoked a cigarette then brushed my teeth then went into the bedroom and talked to her about what's been going on in my head and how I'm fucked up but I'm going to do the things I need to do to feel okay so I can be better to her.

Thank you for being there.

We need each other.