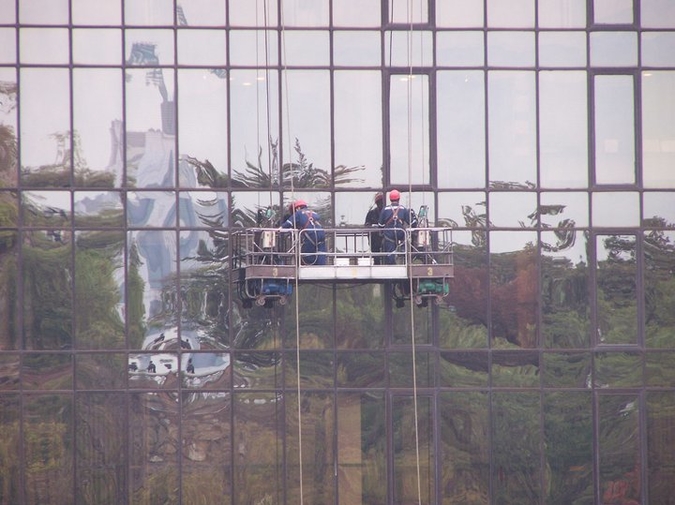 Ours would have been a “really strong” petition a couple of years ago. Strong, like the petition is a burly, weighty thing. Like it can crack a punch. I picture it swaddled in cartoon boxing gloves, a twelve-pointed starbust behind it. Ding ding ding. The first of many rounds.

The L-1A nonimmigrant classification enables a U.S. employer to transfer an executive or manager from one of its affiliated foreign offices to one of its offices in the United States.

Nonimmigrant. Are we immigrants or not? Notimmigrant is more like it. But let’s go with Non, for bureaucracy’s sake.

The Bishopsgate solicitors’ office seems legit, cool and corporate. There’s a leather reception, a Japanese water feature tumbling onto pebbles, and thick, glass walls that overlook the Bank of England. G and I are sitting in a tight meeting room, and through the glass I can see the stone pillars that dominate Threadneedle Street, rising up from the road like prison bars.

It’s obvious the British-born-but-of-Mexican-descent immigration attorney is talking about Trump by that little word choice, “random”, but she can’t say his name, like she’s swallowing down a tumour in her throat, gagging to flatten it.

Random. It’s 2018, and nobody is comfortable saying his name, not him: that great, orange Voldemort. Brits prefer not to discuss him in polite company.

This attorney observes us from behind our paperwork with detached optimism because at least we’re white, her eyes say, at least there’s that. That’s all they’ll need from us, at first. Then we’ll need to speak properly, RP accents, say our lines in the correct order, once more with feeling, and bosch, job’s a good’un. And, fucksake, this is London! This is 2018! Nothing to worry about. Still, the tiny cracks of doubt.

We thought we were ready for the visa interview, imagined we were quite soundly prepped, but this encounter – our first ever with an immigration lawyer, and certainly not the last – frightens us. We scour British Expat Forum, Immihelp, attorney websites brandishing their wares, desperate for clues, for ways into America. What to wear? What to say? And, crucially, who will be the one to decide?

That word, that prickly little word, “random” tickles me at the summit of my spine like a trapped clothes label. It seems random that we’re actually here at the US Embassy in Nine Elms, today, finally, after two and a half years of petitioning for my transfer. And now, one jobsworth behind a post office-style glass pane could make a random decision about our future in five minutes, the long hand of Uncle Sam tipping over our American Dream as if it were a chess piece. White or black. Yes or no.

The Embassy is two months open: a bombastic departure from the shabby Grosvenor Square Chancery Building that Trump proclaimed a “bad deal” and blamed on Obama, except the deal was made by Obama’s predecessors. Trump was supposed to come about now, February 2018, bless it, cut the ribbon, maybe spit down on someone’s hand as the winter air rushed up from the Thames to lick his golfer’s tan. He didn’t. Which means that now we don’t have to tread where he trod.

Security is as taut as cling-film. We carry a tote bag stuffed with reams of notes, the I-129S, petition papers, every purple passport we’ve ever owned, and a near-empty cannister of Lynx deodorant for G. We have to be bullet-proof. Know our shit. We’ve been reading through those expat forums for months. The comments come mostly from other Brits, Indians, Pakistanis, Canadians, all ‘highly skilled’, or so we’ve been classed, all cleaving to each other’s words on the online threads like delicate strands of gold. Because a visa really is a golden ticket; we can’t pretend it’s not. And mine? My category of visa application, the L-1A? Outside of the Holy Grail of Green Card, it’s about as good as it gets. If I get my L-1, G gets his L-2, and we both gain entry as a married couple.

Our valuable load cruises through the airport-style metal detector with no issue. The staff are quite jovial, quipping, bantering. Half Brits, half Americans. Special Relationship Rule No. 1: Love thy neighbo(u)r.

The entrance hall is marbled and cavernous. There are quotes of liberty etched on the walls paying homage to the history of our two great nations. More America, than Great Britain, if I’m being honest. Those pompous, jingoistic colours: red, white and blue flags mingling. We take the lift up, swipe a paper ticket from a plastic tongue, get our number, and sink into our seats. It’s a business class airport lounge and everyone is clearly shitting themselves, nervous flyers that we all are. G fires rehearsed questions at me under his breath, zip-zap, and me back at him. We’ve learned the answers like lines in a play, internalised them:

“What do you do in your current role?”

“How many people will you be managing?”

“What will your job title be?”

“And your annual salary?”

All simple enough when written down like this, as we wrote down over and over again, specific word patterns on paper, but how well can you accurately describe what you do on a daily basis, make it sound shit-hot, and then convince someone (American) that you can do the job better than another (American)? Try it; it’s much harder than it looks.

I go to the loo for the fourth time, straighten my Next blazer, pucker my lip gloss. Unusually for me, I’m in heels: taller women command success and I’m already 5’9 in flats. My soles burn as if I’ve performed ballet on an iron. This is my very best go at ‘professional’.

Our number is called, and I taste something stringy and acidic like tomato skin around the edges of my teeth.

First window. A little intercom, a hole to pass through the documents to the Americans, like they’re smuggling our information, mining it. It looks a lot like a post office window. The man doesn’t crack a smile; he’s all business. G and I don’t look at each other; we don’t dare. I imagine my husband’s chest quivering under his smartly-buttoned dress shirt. My breath crackles as I open my mouth to speak. No, not yet. Save the spiel for later. We’re commanded to sit back down.

I see someone I recognise from reality TV: a breathy Chelsea socialite, a minor celebrity. She’s with her publicist, gassing loudly. I wonder where her nerves lie. I wonder if she’s trying to crack America. I don’t reward her my attention.

We’ve been here over an hour already. I ball my fists. My fingers are cold. They feel long, like they might stretch across the room, tap that other passenger over there on the shoulder: a cheeky prank. Hey, you! Missed your number! G is exhaling in mini puffs. We don’t hold hands, can’t, not yet. Don’t want to jinx it.

Second window. G is asked about the time he lost his passport when returning to the UK off a student visa over a decade ago. He explains it vanished down the cracks of a taxi seat, and that he took all the appropriate legal measures to get it replaced, but there’s clear accusation and a lot of face scanning going on. A loss is a black mark. Fuck. Then it’s my turn, and by some miracle everything I need to say somehow comes out hot and good, like when I’ve had a glass of wine and all of my desires suddenly seem more possible than they did ten minutes ago.

This isn’t random. This is design: our intricately weaved golden future that we’ve been charting together since we met (quite randomly, speed dating). We’re doing it. We’re newlyweds and, by George, we’re going off to live the American Dream.

I’m asked for and provide my new compensation. I accidentally forget to say the “thousand” after the figure, hastily add it to my annual salary, make a little joke of it: haha. The American behind the glass lifts his mouth into a waxing crescent. He looks ex-military: no stubble, haunted eyes.

And then, the black stamp on our documents like a gavel and it’s all over. After years of build-up, of sleepless nights and bad mental health days, of family arguments and news avoidance, it really is as dreary and prosaic as that.

G finally goes for my hand, wrings it. He feels familiar and I know everything’s still the same in this second, but about to be very, very different for us. We’re touching beneath the window; you can only see we’re holding hands if you’re a little way back in the queue behind us, or if you happen to be standing in the next booth along, but then, who’s really looking? We’re whirling together on a teacup ride, the world dangling and rushing, swaddled up in our specific marriage, our specific dreams.

“Over there to pay the processing fee. Cash only.”

Third window. We’re gleaming, can’t contain ourselves. The woman behind it is just as terse, just as pissed off as the others. We hand over our Great British Pound Sterling like we’ve never been more pleased to hand someone money. Take it. Take all of it and be done with you.

We ride the lift back down on a pocket of air, navigate back past the marble statues and columns, back through security (“Congrats, guys!”), cross the towpath beside the river in ear-aching cold and launch straight into the nearest boozer to get our glug on (“Just gimme ALL OF THE PROSECCO”), while concurrently texting and calling and social media-ing everyone we’ve ever met.

We choose a squashy spot beside the pub window that lets London in to us, newly-birthed nonimmigrants, or whatever the hell Uncle Sam wants to call us, because, let’s face it, we’d let him call us any name he likes. I lift up my flute to my face, and stare past my husband, out the window and onto the Thames, where I follow the lilac and grey waves and patterns of the river as it surges and laps against the concrete embankment, and then washes away again, receding into the cracks by design.

Natalie Harris-Spencer is an English writer, digital editor, and blogger living in America. Her work has appeared in Allegory Ridge, the Stonecoast Review, The Dark City, The Satirist, and more. She was selected by Oyster River Pages as one of their Emerging Fiction Voices, and she is the winner of the 2021 Hummingbird Flash Fiction Prize. She earned her MFA in Creative Writing at Stonecoast, and she is the Editor-in-Chief of Aspiring Author. She can be found at natalieharrisspencer.com. She is currently working on her debut novel. Natalie enjoys surprise in fiction. And tea.