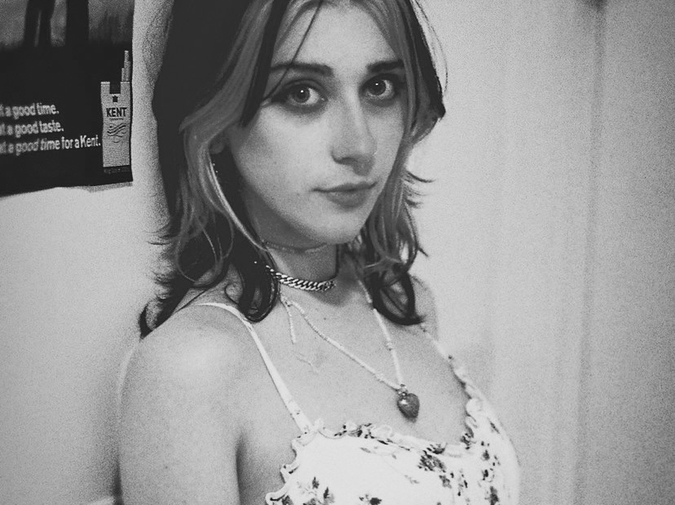 It was 2016: the first time that we visited the boy’s unit at the Albuquerque Youth Detention Center. Initially, I noticed all the things they were allowed to have, which the girls were not: they had an open field of grass to roam in the afternoons, they could watch horror movies, and write letters to their friends back home. It had no particular scent.

When we arrived, the boys had arranged the silicon, muted-neon chairs into an intricate semicircle. We were told to sit and to talk amongst ourselves. The single-file-line of boys squirmed out of the pale door like a poisonous snake. I noticed all but one of them had a sacred heart tattoo. They encircled us, shaking each of our lotioned hands. They would bite their chapped lips, slightly nod their shorn head, asphyxiate on our chests, and then move down the inverted circle, onto the next girl, only to repeat the same motions. He and I never lost eye contact. We grew closer as the ring of delinquents spun down the line of the group of big-eyed girls. His eyes softened as they aligned with mine, and then he was taken away by the next, pushing boy. The stillness remained, the tattooed havoc never seemed to reach the stringent line of our contact.

I had only spent six hours with Mason, but certain hours felt much longer than others, and I remember all of them, each second as if it was a recurring dream. The contorted amusement between us felt heavy—a herd of wild horses trampling over a sleepless heart. I didn’t know anything, nor did he help me understand. Through the minutes of rosy-splendour, a certain type of mental intimacy birthed out of our hands three inches apart. This was the closest we could get, or else he may be sent to the ward for a psychological analysis of retortion to the sticky rules of the center.

Why are you here? I asked.

It’s a secret. Promise, you don’t want to know. He said, as he drove his gaze down into his shoelaces.

I bit my tongue. But he continued to tell me about the torture he endures in this place, and the boys teased him a fairy. He felt misplaced. He had no one to speak to other than his friend whose name I cannot remember but who bit into an unripened peach and lost his left big tooth, but he liked it that way and swore to never get a new tooth in its place. He did seem misplaced to the eye: a cherubic round, rosy-face, big blue eyes, knobby-kneed, and a soft voice, almost sonorous, like a lullaby voice at noon.

The other incarcerated boys had a palace of calluses on their palms. The sight of a living girl widened their eyes as if there was a comet flying in the night sky. And you could tell, they’d be willing to sacrifice their spleen to any girl that would listen. And if you did listen, their mouths would spill like a runny faucet: their secret, hot-and-heavy, letter-exchange with girls’ unit, their nightmares, and the hidden Christian agenda of the prison system.

I used to visit the detention center as a service project in high school to teach them the lost art of poetry. I, along with my school-mates, frequented the girl’s unit, which was much different: the interior landscape alone was much more confining for the girls, silicon-everything, long socks were banished (Angel tried to choke herself with a pair), and it smelled funny, like old cereal.

We were instructed to go outside. I sat down in a dry patch of seeds, it was Spring, and the flowers had yet to grow. I played with them, as I tried to hide my tearing eyes. The boys were released outside and dispersed like a flock of caged birds acquainted with the open sky. I suppose they had called dib’s on who-got-who and whatnot because every boy seemed to magnetize to a different girl. He slowly walked toward me. It felt as though we knew each other.

I couldn’t sleep more than a couple of hours each night after meeting him. I thought of the cold, hard bed that he must be sleeping on, how he may be thinking of me. Each morning of that very Spring, I was awakened by a crow at my window. The crow always reminded me of him. He told me that the bird was his spirit animal. For most others, it is an omen of darkness, of death, of all things good and pure coming to an end. It is a reminder of light-space: lapsing his physical body with the big-blue-sky, the vibrant grasses, the turned earth beneath; this connection became a comfort to him, with his physical body held in the chamber. Following as the crow entwined with trees, the visions of humans downsized into little ant-bodies, the sweeping, lithe freedom of wings.

The following Saturday, the last that I would ever see him, I assured him that I followed through with my promises with a wink and a handful of ripped-out pages from my journal. He also had given me a pile of papers with drawings of crying animals and poetry of outcast teens, the pages still had the frayed ends. He insisted on reading what I had given him, almost as though he knew what was to come.

We had been sitting on the concrete curb, knees grazing the surface of the other, veiling our entwined fingers -- an act deemed promiscuous by the hentai guard. He had six more years until he was released back into society. A moment he feared; there was something comforting in being exiled from a culture that never accepted him. He repeated that if he could kiss me, he would. He insisted that we would search for the natural form of artificial strawberry flavouring (because hell, it isn’t a strawberry). Even in such a place that was nothing more than a clock, the last three hours that I spent beside him never seemed to pass by, and once they did, we hugged so tightly that I felt my ribs starting to crack. So, painfully, yet so intimately that I can still feel my head pressed onto his shoulder. He squeezed me until my feet left hold of the concrete, “I love you, Mila,” his cheeks blushed crimson.

I was no longer allowed to write to him or ever see him again, because of a diagnosed “emotional attachment” that made him grow angry at his psychiatrist. I learned that he did it when he was twelve, and the following month slowly crept by me. He was the Roswell school shooter.

Mila Rae Mancuso is a 21-year old, Boston-based poet, writer, and multi-disciplinary artist who hails from Santa Fe, New Mexico. Growing up in a small town fueled her urgency to invigorate her imagination beyond the immediate surroundings, leading her to the eternal path of the literary and visual arts.  Her favorite writer is Patti Smith. In both her written and visual work, Mila Rae is inspired by dreams, insects, and visual languages of the past. She thrives on translating the make-believe, whether kind or macabre, into something tangible. She is currently in her junior year at Emerson College, studying poetry and film.