Boris Yeltsin Roots through Your Pantry 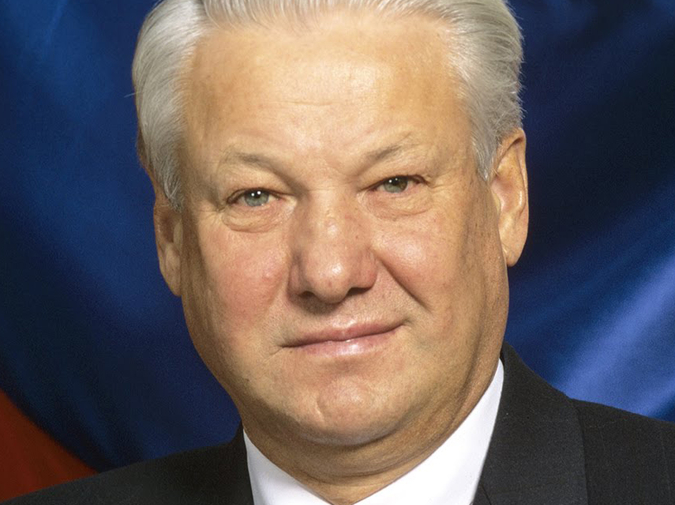 One evening you come home to discover Boris Yeltsin standing in your kitchen.

Normally it’s a relief to return to the little bungalow you bought five years ago, just before interest rates started to go up. Your job has been getting more and more tedious, and your commute has been a nightmare due to end-of-summer construction, but coming home to your own house, where everything is just as you like it and no one can tell you what to do — at least that’s what you tell yourself — makes the job and the commute worthwhile.

You don’t usually come home to find the President of the Soviet Union—or, wait, it’s back to Russia now, right?—in your kitchen, though. His silver hair has that characteristic sharp part, but it’s more mussed than you can remember ever seeing on NBC. You stayed late at work to finish up the quarterly reports that you’re pretty sure no one reads, and now the sun is setting, and the prism hanging in the kitchen window is shooting tiny rainbows everywhere, but that’s not what Boris Yeltsin is looking at, nor is he paying you any mind. He’s opened up your pantry, and what caught his eye was not, apparently, any of the various boxes with cartoon characters splashed all over them—you are suddenly very aware of just how many of them there are, Yummy Mummy and Dino Pebbles and Froot Loops—but the spice rack on the inside of the pantry door. So many spices you almost never use, each representing, in its way, an attempt at seduction: allspice, paprika, nutmeg. You try new recipes in hopes of convincing someone you’re interesting enough to stay with, but it never quite works.

There’s a man in your kitchen now, of course, but that’s not exactly what you had in mind. Why Boris Yeltsin, of all people? Why your kitchen?

Boris Yeltsin holds the glass bottle of ground ginger in his hands as if he’s found a priceless treasure. All the questions you have die on your tongue, and you’re not even sure he speaks English anyway. All you can do is stare. Boris Yeltsin is standing in your kitchen, cupping your ginger. Who should you call about this? Is there the slightest chance they would believe you? Boris Yeltsin looks up, brows drawn over those steel-blue eyes, that bulbous nose. He holds the ginger out toward you, not offering but asking, and you nod, eyes wide.

Nora E. Derrington (she/they) is a Lecturer in English at Washburn University, where she teaches composition, creative writing, literature, and film. Their work has appeared in North Dakota Quarterly, The Future Fire, the anthology Poems for the Queer Revolution, and elsewhere, and she reviews fantasy, horror, romance, and science fiction titles for Publishers Weekly. They live with their wife—the writer Izzy Wasserstein—and a collection of companion animals who insist on using her as a pillow.