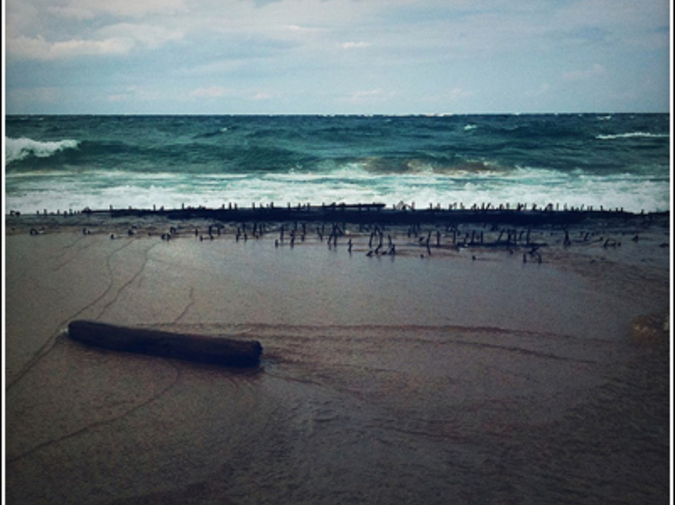 Outside, it’s raining fishes.  The clouds are as black as cauldrons and tree branches are collapsing from the weight of all the fish gob-smacking into them, and I’m just thinking something’s gone dreadfully wrong when our sole source of nutrition is the codfish kerplopping from heaven.  Judy’s been working in the kitchen batter-frying the fish, for there’s no telling how long this abundance will last, all of us concerned as we are with global warming whatnot and our country’s economic despair, and it takes more fish than you might think to set a healthy table, what with the lack of tartar sauce accompaniments or a thick-crusted loaf of bread.  Staring into this sky that looks like it’s been painted by Hieronymus Bosch, depression clouds the soul; though the roof is holding up well, I just can’t help thinking that we’re mid-way through a cave-in of Biblical proportions.

“Quit your whining,” Judy says, setting down another plate of fish on the table, but she knows I can’t help myself.  Her deepest desire has always been to be a character from a Dylan song, so she’s taken to wearing a leopard-skin pillbox hat, which looks slightly ridiculous with the dusting of flour covering it from all the fish she’s been battering.  The plate is like all the others she’s prepared: the fillets three-inches thick and garnished with just enough parsley to make you think care’s gone into their presentation, and yet there’s only so much fish that a man can eat in an afternoon of gloom and doom.

A whole world could drown in a wave of fish.  This is what I understand.  The roads are feet-deep in turbot and halibut, the fleeting sun catching their scales and refracting a prismatic gem-like light, and all throughout the land, among the living and the dead,  people tweet their nightmares in 140-character bursts.  I once loved a woman, a child I am told, and maybe that’s what’s holding me back from unracking the canoe and paddling right into this river of fish, for the woman I loved was once this great nation, a mighty woman with a torch—her name, Mother of Exiles.

Across the street, toddlers point fish at each other, clutching them by their tails and holding them like they are guns.  Any moment, I expect to hear the splat splat splat firing of a twelve-gauge barracuda, the toddlers laying waste to each other with fish entrails.  As housing prices tumble and a man can no sooner catch a fair job than he can a decent gasp of fresh air in our smog-bound cities, it seems that what we can not afford is greater budgets for the Department of Offal to clean up the mess.

“Isn’t it pretty?” Judy says of the fish thrashing about our lawn, blue and bountiful and slow to rot.  You would think that the lack of water would be a detriment to fish survival, but they’re getting by better than me.  In the days before fish, we’d take walks along the river and, yes, there’d be that fishy smell that comes from all estuaries overstocked with trout fingerlings, but it was expected there; now, it’s just plain hard to think things are hunky-dory, normal—yet that is what she does so well, disregard the obvious harbingers of worse things to come.

Judy is sweet, a fair substitute for that which I can not have, with her pale skin and sashaying ways, her hips swinging as she saunters back into the kitchen where yet more fish await her attention.  Atop the roof, fish are building up I don’t know how many deep, and there’s just only so much weight it can bear before it all comes tumbling down.  I could almost love her, Judy, if it weren’t for the noise of the mahi walloping the siding that keeps me edgy and awake.  In moments of sorrow, she consoles.  That is her nature.  Lying beside her at night, there are moments I imagine the ceiling splintering above us.  Sometimes, the hardest task you face is working up the gumption to quit complaining, to take it as it comes.  If I go down dyin’, you know she’s bound to put a blanket on my bed.

Nick Kocz's short stories have recently appeared or are forthcoming in Black Warrior Review, Ear Hustler, Mid-American Review, and The Normal School.  He is an Associate Editor for Keyholeand is completing a novel. Among his likes are Donald Antrim novels and Bob Dylan songs. Astute readers (let’s hope such beasts still exist) shall notice, um, acute similarities between the words that appear in this story and the words that appear in two Dylan songs: “Don’t Think Twice, It’s All Right,” and “From a Buick 6.”  Plus there’s that leopard-skin pillbox hat to consider.