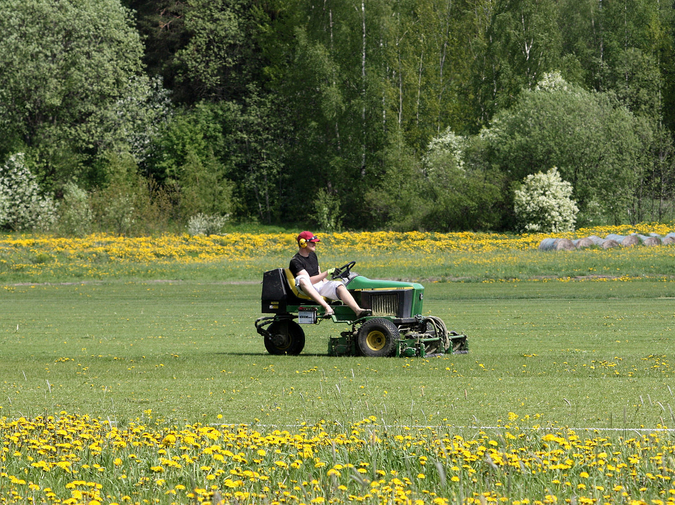 Vic Greener throttles the John Deere up to Rabbit and takes another swath of lawn. The grass here is incessant. Ever since his wife, Heather, plucked the tick from Junior, anything over two inches is unacceptable. It’s a tick breeding ground.

A hundred years ago, apparently, the entire town was underwater. Now the onions bubble up in the black dirt fields. And every few days, after work, Vic must mow.

Not that he minds. In fact, Vic feels wonderful. Sun-kissed and sleepy. As the beer bottle sloshes between his knees, the engine block’s vibrations tickling his spine.

Three old women are coming up the road in the shimmering heat. One is operating an electric wheelchair. He recognizes them from a few days prior. Thinks he does, anyway.

They slow their walk by his mailbox, stop. Squint their eyes against the spicy breeze as they signal for him to visit. They signal more.

Yes, they are certainly the ones from the other day, he decides. All wearing those near see-through nightgowns.

With a wave and a smile, he ignores their desperate handwaving, takes another swath of lawn.

The other day, perhaps, he’d gotten too chummy, made the mistake of telling them. To give them a thrill. About his acting days. Out in Hollywood. Heather’s surprise pregnancy. How they planned to go back West after fixing the place up but fell in love with the old house. “Hold on,” said the one in the wheelchair. “The Vic Greener?” “The one and only Doctor Mack,” he said, giving her the sociopathic stare he often employed during scenes. Then, came a reaction he didn’t expect: all three flinching. Apparently, they knew the show well. In fact, everyone at the old folks home knew the show well, they informed him. Watched it every day. Walking the halls, at three o’clock, apparently, the old folks home echoed with the sound of Vic’s voice.  And it was all good fun until it wasn’t — until their faces turned as serious as a crow scowling from a far-off telephone wire. Why did you murder Barbara? Why did you double-cross Nick?

But his joke came out wrong. The questions kept coming, wouldn’t stop. Did you, Doctor Reginald Mack, really think you'd get away with making all that cocaine in your laboratory?  The three old women really did appear serious. Then they stopped asking, probing, and poking, and began telling him the consequences for what he’d done. What Doctor Mack had done, this make-believe character. The pain he’d caused. Their faces grew slack and it was hard to find any sight of an expression beneath the wrinkled bedsheet of their aged faces.  They stated his reckoning must be swift and righteous. One of them even pointed a long witch finger toward the house. He had to turn away. “I have to mow the lawn,” he said, cutting the conversation short.

So, now, today, as Vic loops back around on the John Deere, and the three old women are still standing there, he refuses to stop. Even as they beckon more, gesture. These incredulous old goats. Relentless. He mows. Each time he loops around, he waves at the trio with this smile plastered on.

Another swath gone now. One of the old woman must’ve walked away—thank God. Because there’s only two of them now. One standing, one in the electric wheelchair. He looks up and down the road for her, repeats this. Unable to locate the third who couldn’t have gone far.

Now the two old women are looking down at something by their feet. And then their hands are in the air. And he begins to wonder if he should be concerned.