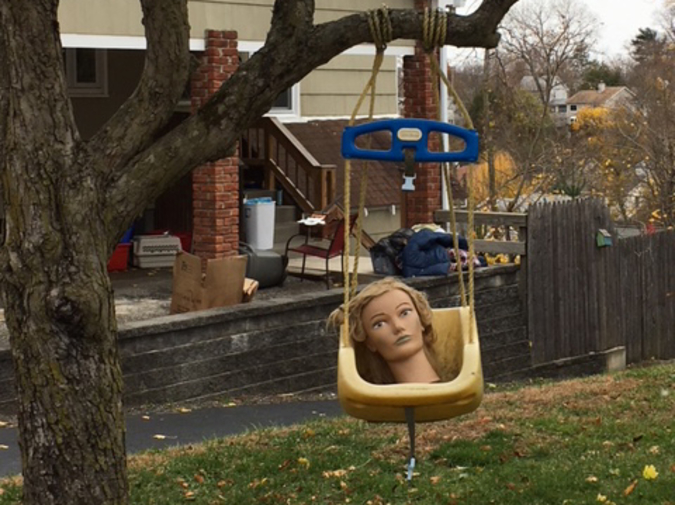 On the morning of my abortion I watched a Teen Mom 2 marathon with my head in my view box. I had made it out of recycled cardboard. My friends watched their antiquated shows on goggles, but I preferred the old fashioned way, with my iscreen slipped into the slot I made with my penknife; my neck accommodated by the half-moon I sliced in the box’s side. I’d even made a perfect circle to fit an extra-long flexistraw so I could drink from my canteen while I watched comfortable in bed.

The screen showed young women having children, even pregnant with a second while their toddlers ran around belly-flopping into shallow lawn pools. I felt the splash through my sensation upgrade. The mothers looked tired in the way that people do when they’ve given up their own lives for someone else’s. They had old-fashioned names like Chelsea, which was once a part of York when it was thought of as New. My mother had talked about this show, how she’d learned about birth control from the URLs they scrolled across the bottom. I’d asked her when she was still alive what’s controllable about birth? And she had said, “Not much, Temerity.”

Later at the clinic, the doctor lip-synched to a prerecorded voice the law forced them to play before any woman’s procedure. I waited for the scrape, as I had the last time, when I was too young to carry a child. Now I was too old.

There had been a window—before my job tightened its clamps—when I would have considered giving up my autonomy. “I’m just career-minded,” I’d said to my mother then. “What’s that other word I’m thinking of?” she’d asked her iscreen, which chirped in its Australian accent, preset to remind us of my late father: You are thinking selfish.

Once the recording was over and the doctor returned to her own voice, she pulled a tablet from her inside pocket and asked if I preferred to hold it or should she get the view box from the sterilizer. What did I need to see? The sanctioned recorded script was over. What would I have to sit through before I had myself back? My body was my own. I knew I wanted no citizens. “Options. In case you’re considering them. Forty-five seconds give or take from our sponsors. Lay back. I’ll squeeze you a juice.” She eased me flat on my back so I could be eye-fed my abortion pop-up ad.

I mounted the view box on my head. The box was sleek and silver, the kind whose walls disappeared into nothing while a panorama projected around you. The viewer became part of the scene. I wasn’t used to that platform. My DIY cardboard box let me watch—not participate in—someone else’s story.

I saw an animated lamb in a pouch. A logo. A woman who looked like a younger me appeared as the lamb faded.

What if I told you that you could grow your child in a sack? Yes, I know (a giggle) that’s where it normally grows. But what if the sack was outside your body? What if instead of growing big and fat, tiring you out, bloating your ankles, taking you away from your work, your little one could find new lodgings?

I entered the frame with her as she mewed, pleasant and floral. She told me she’d let me in on a secret and somehow, then, I became relaxed, as if the sedative drip had already been activated. She walked across white space to a box. I followed closely. Lifting it, she revealed a translucent bag of thick plastic. Inside was a fetus folded over itself, almost like an earlobe. An earlobe that swam. The earlobe that had no face, no hands. Photogenic nonetheless. I smiled and noticed how a grin and a lobe share the same shape.

The extra-uterine system comes in many sizes to accommodate the growth of a fetus until you, the parent, are ready to care for it. The sizes start with the traditional nine months, on through the post-fetal span of years, all the way up until the cessation of growth.

The woman sashayed, put real life into her hips. Did they expand? Or was that the iPersonalize feature on the view box, making everyone I saw shaped a bit more like me? I felt the change of air as she walked across the infinite-seeming white space. She had somehow made the world grow.

She arrived at a red curtain and with a twirl—her fingers like scissors—she tore the fabric from its hinges. There appeared to be a child inside the bag. The child, big enough for grade school, somersaulted in viscous liquid. A length of hair followed. While I couldn’t see if it was a boy or girl or a designer intersexed child, I did see contentment. I saw a thing protected, boundless.

Your child looks happy! And yes, I know you’re wondering, are they warm? Our bags are kept at body temperature always! But that’s not your only concern, surely. Inside the safety of the biobag, they avoid years exposed to pollution, harsh chemicals, and the psychological trauma of a birth expulsion! It’s up to you to decide when they’re ready for their Bio-bag birth.

With a Bio-baby, your child’s independence begins with yours.

I reached out to touch the bag, to feel its 98.6 Fahrenheit degrees. Cords connected to it, fashioning a system where amniotic fluid was first pumped in by a red tube and then suctioned out by the blue one. It buzzed like breath.

The expanse of white shadowed. I knew the doctor had returned but I couldn’t see her. The ad played on. I smelled the fresh juice—carrot and beet I thought—something that had lived in the dark and brightened itself with vitamins. In the bag the child swam and twirled and stopped long enough to meet the eyes of the camera. Those eyes were looking at me.

Melissa Ragsly is an Associate Editor for A Public Space whose work has appeared in Best American Nonrequired Reading 2017, Epiphany, Green Mountains Review, Joyland, Cosmonauts Avenue and forthcoming in Split Lip, The Iowa Review and Southern Humanities Review. More can be found at melissaragsly.com.