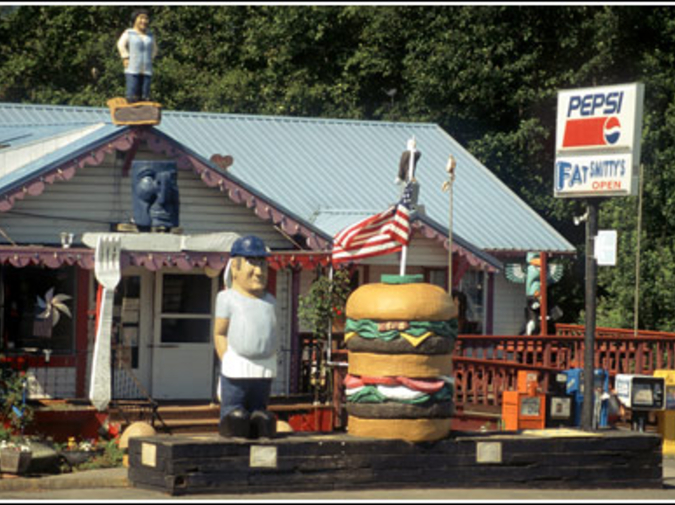 "Now Mr. Nguyen, here, he could benefit from a little trip over to Harold's Running Bull. Quaff a few, soak up the local culture, and shake hands with the biggest griz ever shot down in this valley. Stands eleven feet if he stands an inch. Fangs dripping right over the blackjack table. That Harold knows how to stuff 'em."

Rick Sproule pushed his barrel belly against the Formica table, a four-seater. He drained his coffee and waved at Essie for more. She finished chatting with Valley Pest Control and brought the pot.

"How tall do you stand, Mr. Nguyen? Not eleven feet, I'd

"Try five," said Pete Rimer, not really barrel-bellied but definitely barrel-shouldered. These Valley men were big. Hulking over the Formica table, the three of them dwarfed Mr. Nguyen, an Asian elf in his restaurant whites, constantly pulling elegant French inhales, engulfing himself in mysterious curls of smoke. Essie had given her new cook - chef - a coffee break so three of the locals could say hello. "It's Noo-Yen," she'd told them.

"Try four-five," said Cameron Billey, whose forearms were probably twice the thickness of Mr. Nguyen's thighs. "Just kidding, Mr. Nguyen. Bet you were a regular ferret in those underground tunnels."

"Come on, Cam, he was just a baby then. Not a Cong. Don't bust his chopsticks."

Mr. Nguyen slid a new Marlboro out of the pack. He didn't smile. He didn't not smile either. He smoked so elegantly, in that French-Asian way.

Pete Rimer waxed nostalgic for his eighteen-wheeler, which used to yield him sixty five dollars an hour on long hauls before insurance made it ridiculous. "Mr. Nguyen should have been there the day I was rolling down Highway 301 and felt a bump. Rolled into town with a godawful scraping down below, with the wheel shaking the whole cab at 55, and I said, 'shit damn, got to get 'em balanced again.' But I stopped out by the Mountain Mall to look and fuck me if there wasn't a big sow griz jammed under the front end. Fur scraped off, skin raw and bleeding. Goddamned mess. must have dragged her two mile, and she was dead as the stuffed one at Harold's place. Just a mess of bear meat."

Mr. Nguyen nodded, acknowledging that he understood. He took the longest drag, creating an ember that glowed like a little furnace.

"People came running from all over that mall," Pete Rimer said, "You know what I'm talking about."

"Big," Mr. Nguyen said, which was just the word Pete wanted to hear, so he continued. "Well, everyone's standing around, gawking at the bear I mowed down and all of a sudden we begin to hear this unholy sound, kind of a low rumble. And then it builds to kind of a rumbling thunder and the front end starts to lift, and out comes this freight train of fur and fangs and blood. You should have seen them folks run back into the mall. That was one pissed-off bear."

"And what did you do, Pete?" asked Cameron. Big sly grin.

Pete hulked over the Formica. "Stood my ground. Was my truck, not his. Climbed back in and rolled out. Worse thing you can do is run from a griz, unless you can run forty miles an hour." Although Cameron had asked the question, Pete directed his answer straight at Mr, Nguyen, staring downward. Mr. Nguyen inhaled anew, after which he said, "Big," indicating he was impressed.

Cameron lit a smoke of his own, a Merit Light. He leaned in hard on Mr. Nguyen and blew a Merit Light cloud straight at him. Mr. Nguyen sniffed it and shifted just a little, where he could breathe alone in his own Marlboro cloud.

"At my height I bump into ceiling fans sometimes," Cameron said, "but there's an advantage when you're alone in the woods talking to elks."

Mr. Nguyen looked up at Cameron, who stood a good six-five.

"Was over by the Caldron one day, in deep where the grasses grow real high. Me and my bow and arrow. I was talking to this bull elk about a mile and a half off. We were bugling each other."

The three big men had their elbows on the table, listening hard. Mr. Nguyen stayed right as he was, back to his chair in his own smoke cloud.

"Then those grasses started bending and there was a sound that wasn't wind," Cameron said, "and first I said here's my elk. But then I saw that silver hump and he was up on his two hind legs. Swear he looked big as the stuffed one at Harold's."

All three glared at Mr. Nguyen for a reaction. They got a polite smile and another "Big."

Suddenly there was movement across the floor, a small blur of fur streaking underfoot.

The three, Rick, Pete and Cameron, bucked like rodeo bulls, nearly knocking over the Formica table. They sprang to their booted feet. The sugar bowl slid and crashed.

Mr.Nguyen, who had worked in the teeming cafes of Saigon and Shanghai, continued sitting and smoking. He looked down at his small pointy black shoe, the left one. There, on the flat part of the upper, the mouse had stopped running and climbed aboard. It seemed to have fallen asleep.

Paul Silverman has worked as a newspaper reporter, sandwich man, olive packer and advertising creative director. One of his commercials won a Silver Lion at Cannes. His stories have appeared in Tampa Review, The South Dakota Review, The North Atlantic Review, Word Riot, In Posse Review, The Pedestal Magazine, The Timber Creek Review, The Front Range Review, The Jabberwock Review, Jewish Currents, The Coe Review, Amarillo Bay, The Adirondack Review, The Paumanok Review, Smokelong Quarterly, Subterranean Quarterly, Thieves Jargon, The Summerset Review, and others. His piece, “Getaway,” published by Verbsap, is on the Million Writers Award list of Notable Online Stories of 2005. Byline Magazine and The Worcester Review have nominated his stories to the Pushcart Committee. New work was recently accepted by Oyster Boy Review, Alimentum, Lily and Cricket Online Review.