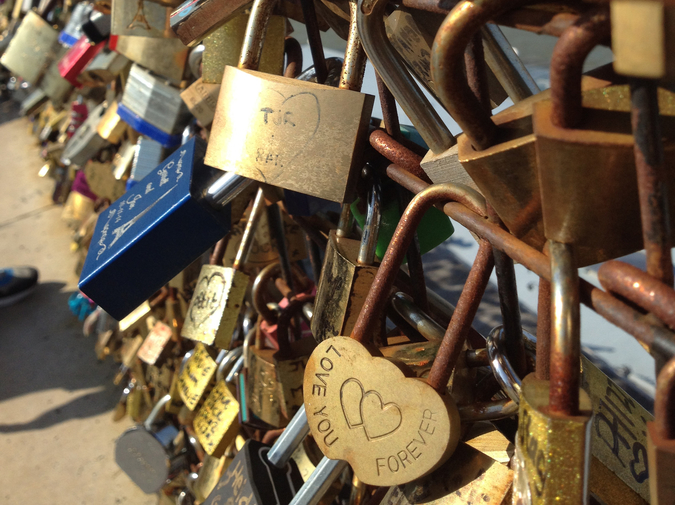 The image comes of you on your bike, seen from high above – se faufiler – on your bike, calligraphing and recalligraphing the scroll of the city in an improvisatory poem that goes on for as long as it goes on. Between the lines.
– Eric Darton, Book of the World Courant

The city is your own as it always was. Wounded.

I watch from above, Paris superimposed onto New York, wrapped in a horror that surrounds me but won’t come inside. It closes in, invisible walls that quicken my breath into meaningless inhales and exhales. The dizzy jolt of claustrophobia, the work of calming my body. That’s when it comes, that image of your coasting weave over mute streets.

You bought that bike at the marché des puces, remember? Two decades ago. We both knew it was stolen. See the soldiers with machine guns on the corner? Just like before, when they sealed all the garbage cans in the métro for fear of someone planting a bomb there. Those soldiers and your Moroccan face. Just as before, you must become only movement. Movement away. Away from them. And so you ride too fast to register the café where we met every day after your dance class, the covered passage where we filled up on cheap Indian food, the corner where we got mugged that night, so high we thought we hallucinated it. But our pockets were empty the next morning, they were.

You are going elsewhere. So you keep forward into the wave that washes over and submerges you alongside all the hovering souls. As the water recedes you see them rise from the asphalt, like steam from the subway grates.

Keep moving lest you lose your balance, lest you get trapped in these invisible walls that hold me still and silent. The image of you as tu te faufiles, a lifeline, free movement among gaping monuments and armed soldiers. Here from my Harlem balcony I remember your tattooed body. How I tried to calibrate you, your memories, that present, and this future where you keep pedaling as tears crawl sideways from the outer corners of your eyes, over your temples, to lodge in your thick black hair. Hear the soft whistling, an ocean in a sea shell cupped to your ear. The sound awakens you, me, to the memory of the city alive. But for now it’s still. Stunned. Like it was before.

This is nothing new really, you said that time. You would say it again now. You always saw the layers of violence. Of the peace activists killed at the Charonne metro station in 1962, 300 meters away from one of these new attentats. Nine victims, all white, of varied ages, mostly communists. Of the less remembered and more atrocious – if you think body counts matter that is – massacre of 1961, when scores of Algerians were drowned in the Seine.

What jerks your tears? I hear you ask. Numbers? Streets you once called home? That you know the taste of the air? Blood of yours?

Then comes your reproach: You always cared more for your own. You always took the bigger piece, unless you thought someone was watching, and then you pretended. And you call yourself a humanist? Don’t you know yesterday in Beirut, tomorrow in Mali? Whose sons? Whose mothers? Killed.

You find a scrap of green grass by the Canal St. Martin. So eerily warm, this November. And there you sit, to watch the water reflect and flow. See those floating swaths of oil spread iridescence over the blue-gray slate. See how the city patches it over and continues, as you must. It all must crumble into a pile of just-so stories. More soldiers with machine guns coming over the canal bridge toward you now. So you take your bike and continue on. Over cobble stones, each impact on your tailbone a reminder that your body is wearing out. Two decades ago you were not as fragile. Now you rise from your seat to stand on the pedals, you lean forward a little so that only your circling feet absorb the shocks, your flexed knees suspend the rest of you. So you ride, as you always have, on the sidewalk, over the curb, into the street, between the cars and vacant-eyed pedestrians. You never had any respect for traffic. Contramano, I would say, and then ask, how do you say it in Arabic? But I don’t remember the word any more.

I remember when New York became home to me. Downtown Manhattan in 2001, as the tourists trickled back, first slowly, then in waves. The air choked us yet they insisted we take them there, by the hand. To feel, oh to feel, because tragedy, at a certain distance, makes us so alive. To have survived it. All I knew then was that we had now become the angels of death, by mere dint of our survival. A decade had passed since I'd seen you last. The flow of aerogrammes had petered out between us, I had married someone else, but the image of you on your stolen bike stayed with me. I could still see your feet spiraling, just a foot over the asphalt, tandis que tu te faufilais dans la rue. I was teaching philosophy then, and I always found myself drawing spirals on the blackboard. Spirals for Hegel, for Marx, for Hannah Arendt. It was always the same moment and history pushing through, headed somewhere I could not fathom.

Last night I noticed that the geranium on my windowsill – the one that is dying – flowered gorgeously, probably for the last time, in its distress. I could tell you that after that I saw a tiny ripple in my glass of wine and ignored it. Later, when I understood what it meant, the evening shattered, the whole weekend. Around midnight I stepped out onto my balcony to smoke. I saw the man who squats in the empty brownstone down the block ride past on a little girl bicycle, pink. He explained to me once how if you find an empty space and you improve it, the place becomes yours. And ain’t nobody gonna take it from you. Like the pilgrims, he said. Like the KKK, he said. And I stopped listening, bewildered to see my white face reflected in his brown face. I said, I can’t go there with you Johnny, I just can’t. And he shook his head as I took my child by the hand and kept on walking home. Right? He yelled after me.

He was riding down the street like you, contramano, and the image came of you on your bike, and I wished for the dream of the flying bicycle to return, the one where I find you again. I felt that old ache of desire and it was bitter because there was no substance to it, a reaching into emptiness. Some things have no explanation. Others you have to let go. If you slow down enough you will have no choice, your feet will set on hallowed ground. As I write this it seems entirely possible that tu te faufiles, still, on that same bike, over Paris, survived.

Denise Milstein is a writer and researcher. In both capacities, she chases after stories to write them down, then lets them go unharmed. Her fiction and non-fiction appear in Tupelo Quarterly and The Wall, among others. She teaches sociology at Columbia University and lives in Harlem with her son.