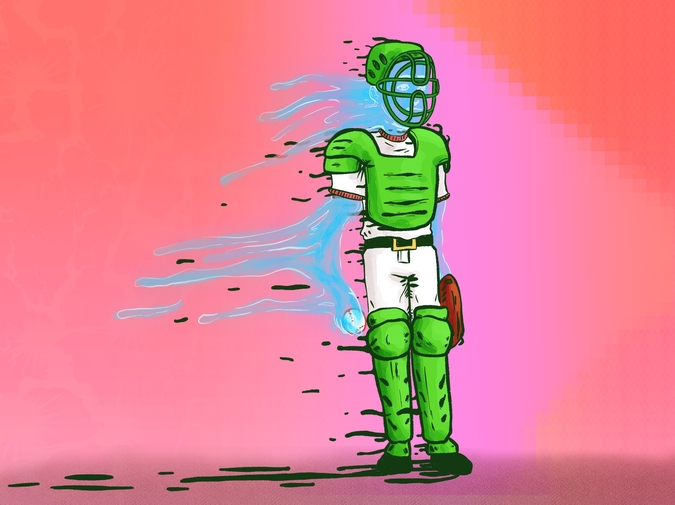 I played left field for the Tularosa Middle School Tarantulas girl’s team. I was long and brittle, like a cactus spine. Or a splinter. And I was afraid of the baseball. I batted .083 that summer and ate shit on three really important plays, but it didn’t matter. Kiki hit .313 and caught a no hitter the third game of the season. The Carrizozo Radon Daughters of the White Sands Missile Range Regional League had the best amateur battery west of Tucson, and Kiki “The Control Rod” Gutierrez was famous from El Paso to Santa Fe for one long, glorious summer.  I never missed a Daughters home stand that whole year.

There was something about the way her thighs creased when she crouched behind the plate. Even dad said she was “built like a brick shithouse” which he assured me was an elite compliment for a catcher. To me she was a goddess. The golden skin of her forearms I could see from our spot on the bleachers along the third base line glowed in the July sun, muscles rippling. Like Artemis drawing her bow as she punched her glove and delivered the signs.

The Daughters were real daughters. Of physicists, colonels, pilots, missile men of all stripes. Dad said if I could get over my terror of having a ball hit in my direction, he’d let me try out for them in a couple of years. If I still wanted to play ball by then. He meant that probably I would be chasing boys by then. The sons that the daughters were supposed to be eyeing.

At the end of August, I watched Kiki put her bare hand down into the red dirt behind her knee and scoop up a ball like it had just been sitting at her heel the whole time instead of screaming toward the backstop, ricocheting off the plate and zig zagging wild. A little bead of sweat escaped the band of my ballcap and traveled down my nose and onto my lip where I licked it off. It tasted like salt and dust and leather.

And then she started to break apart.

It started at her spikes, worked its way up her legs, shredding her acid green pads, fraying the straps where they were bound tight against her calves. Then her socks, unraveling from the knees where they met the elastic edge of her pants. Then her arms. Her strong sweat-wet limbs started to come apart. People started screaming. The Daughters came out of the dugout, mouths hanging open. Kiki dropped the ball she was holding and it rolled through the puddle of her to stop at the ump’s feet.

I do know what I saw. But I gave up trying to convince people a long time ago. It’s something that happens, sometimes, my dad said. Kids are exposed to stuff, sometimes. Daughters pick up the shit their fathers work on. She didn’t melt that day. That's your kid brain writing the story for you. She was just sick. Didn’t you see the ambulance come, they put her on a gurney and took her to the hospital. She didn’t turn into sludge.

I didn’t try out for the Radon Daughters that next year. Or the one after. I never got over my fear, but I never got into chasing down sons, either. It’s still daughters for me. The summer that Kiki Gutierrez liquified at the plate—or collapsed and went to the hospital, or whatever—the summer the Daughters won the league championship and everyone knew her name, was the last summer I played ball. It was the last summer I ever spent in Carrizozo, ass glued to the too hot pitted wooden benches of a ballfield with no grass, salt and sweat in my eyes.

Anna Reser is a writer and a historian of hot and dangerous machines, living in New Mexico. Her twitter handle is @annanreser.