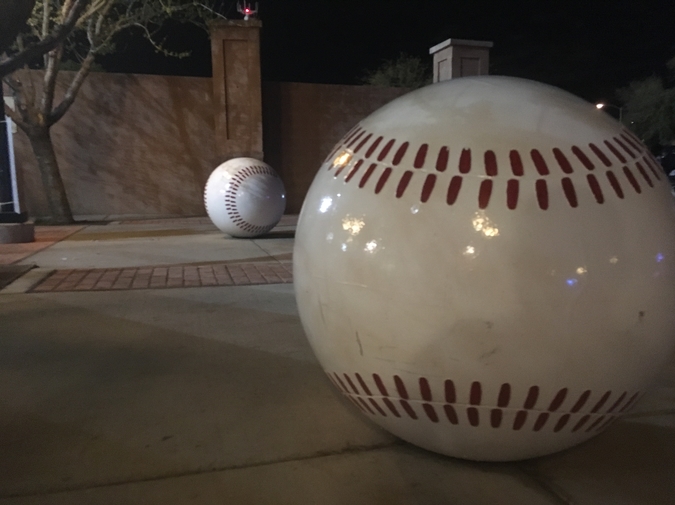 When I am young, over one hundred years after the Ten Years’ War when Cubans fled their island and introduced baseball to Dominican Republic—my place of birth—and eight years after my family came to the United States, but ten years before I enlist in the Marines at the recruiting station on Main Street in Patchogue—a village named after a dead tribe—my left hand fits small inside a secondhand, sweaty leather mitt.

When I am young I wish I were invisible so that the white boys will stop screaming, “Go back where you came from.” I plead with my mom to move back to the city but she tells me we can’t, and then she commands me to fight back because I’m the man of the house. She doesn’t call my father, her ex-husband, but she asks relatives for help and on Sunday after church the men change and neatly hang their suits in between the chain-links at my elementary school field. The men don’t care if I am the youngest; they treat me like a Dominican and put me on second. My mitt slides off and my reflexes are slow. Rather than coach me the men step in front of me and make all the plays.

When I am young rent on River Avenue goes up and my family moves to Section-8 Housing on Railroad Avenue in an apartment building next to the station. I go furniture shopping with my mom and two sisters on Main Street. One of the sales reps approaches and greets us. The short-sleeved white shirt fits tight against his fat and his belly bounces when he confesses he’s puertorriqueño as he extends his hand to shake mine, but I don’t laugh along. My mom talks about our family’s move and it turns out the salesman lives in the same building on the fourth floor. “Que bueno,” he says, “y el hombre de la casa?” And I wonder why he’s pointing with his lips at me. My mom answers in Spanish that I am—the man of the house—but due to my lack of size and inability to throw a fastball, I’m hardly a man at all. The sales rep gets down on his knees and I refuse to meet eyes and instead notice his bald pattern and cigarette breath. He says he will teach me how to play béisbol this weekend. I stop playing catch with him after he keeps trying to touch me.

When I am young I don’t understand linguistic imperialism and I’m not able to point out the irony of who belongs where when most of the towns in Long Island are named after Native Americans. When I am young I am free of being defined by baseball. I run the bases without rules or secondhand cleats and in my mind I don’t have to be the man of anything.

Francisco Martínezcuello was born in Santo Domingo, República Dominicana and raised in Long Island, New York. He has been writing short stories and journaling since he was a teenager. His passion for literature and writing continued throughout his 20 years of Marine Corps service and helped him understand the impact of war on our nation’s veterans. He is an Into the Fire Writing Retreat Scholarship Recipient, a Virginia Center for the Creative Arts Fellow, and a contributing co-editor for the forthcoming veteran anthology, Incoming: Sex, Drugs, and Copenhagen. He has been published in Construction Literary Magazine, The War Horse, Split Lip Magazine, River Teeth: Beautiful Things, Collateral Journal and the Dominican Writer’s Association. Publications and social media are posted on his website – www.themotorcyclewriter.com.