Being A Vengeful God for Minimum Wage 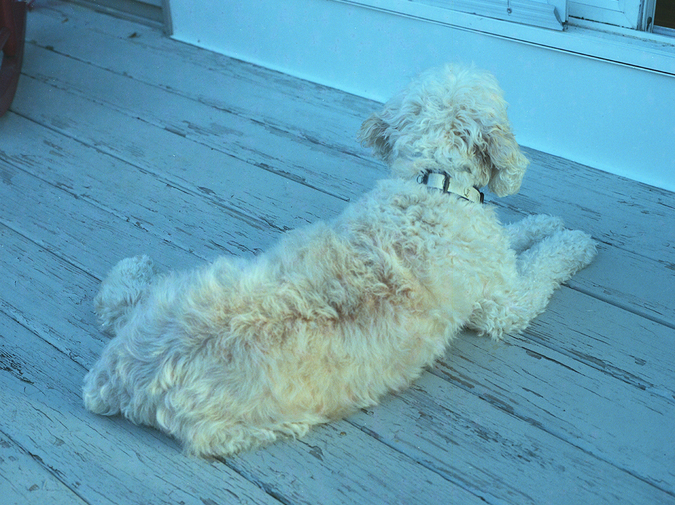 This was the summer when Laurie was training dogs not to act so much like dogs. She did this for money. People would come to her and say, he barks too loudly or she jumps too often, and she would kneel down and give the dog treats until they did what she told them to do. It was all very Pavlovian, not even her job specifically, but everything in her life. Sometimes there was a glimpse of recognition that they were being tricked, then distrust, then acceptance. The acceptance is what made her break down at the end of her shift.

Dogs aren’t supposed to act like this, Laurie would say to her reflection in the bathroom, and then clean the mirror.

It was funny what life had handed to her: tiny kneecaps, a comically upturned nose—like a badly drawn Disney princess—and migraines that left her almost religious in her desperation for relief. The migraines were the worst in the summer. The heat was apocalyptic, but not in an exciting way. She felt suspended, on a disorienting vacation that wouldn’t end.

There was something that she wished to start, and when she started it, she figured, her life would take on new meaning. But in this moment in time, she ate breakfast bars all hours of the day and worried about money.

This was the summer when Laurie listened to songs that referenced dead poets, and it made her feel special that she recognized the names. She was embarrassed by this fact and told no one about it. She would sit on her white, bumpy roof at sunset, when the sky made her pupils get all small and scary, and she would be glad that her depressed brain, which had no problem forgetting things, could remember this.

Jen was a friend. Perhaps the only one. She was beautiful, not in a fragile, oblivious way—bullied in grade school for her looks, dropped out of college, discovered which haircut framed her face, and the rest was history, and history was just a way of looking forward. Her legs were a bit bowed out, like a sighthound, all high hips and exciting energy, as if she were about to jump. Laurie loved this about her friend, her ability to prepare or seem prepared. She wondered if these feelings were romantic. Laurie knew that when she felt romantic with someone, she had a hard time picturing their face in her imagination, the serotonin messing up her ability to display what features a face consisted of. She could see Jen in perfect clarity, more than anything or anyone else, and this seemed very different from romance, a different word entirely.

Where they lived, people dressed like cowboys ironically, drank cocktails with funny descriptions, called famous people by their first names, not first and last, and this made Laurie a bit sick, like she had been picked up and dropped in the middle of the ocean.

Tasteless, is what this city has become, and we’re willing to participate for the sake of entitlement, Jen would text Laurie when they were both on public transit going in different directions to different minimum wage jobs.

It’s more for the sake of saying, yes, it took me an hour and a half to travel three miles, and this has not made me a better or happier person, Laurie would respond when she had service, the message floating between sent and unsent until it decided to go through.

Laurie acted quietly assured, as a dog trainer has to be, but with a lilting, high-pitched customer service voice that was unsettling in a bad actor sort of way. She didn’t talk to her coworkers, which was abnormal for retail but not for this store in particular. Most people just did their jobs, grabbed their belongings out of their locker, and went home in a low-spirited stupor. Sometimes, if the store was slow, the employees would gather around the enclosure where Laurie trained and watched her wave her hands and shout in an attempt to put the dog in a trance. They would cheer when the dog would sit down or shake or act remotely human. Laurie secretly liked the idea of people watching her do this, all Lara Croft-ian with her belt that had a little compartment filled with treats, her name tag decorated with paw prints.

I’m ashamed that I like being watched, because it’s not even a job I like, in fact it makes me really sad, Laurie said to Jen on her tiny IKEA couch.

Jen said that Laurie’s narcissism was a response to capitalism and that she wasn’t at fault for liking herself in this position of power when she was usually powerless or something like that. Laurie knew that Jen was always making up these nonsense excuses for her bad behavior and that it made both of them worse people. But then Jen would put her head on Laurie’s shoulder while they watched a television show about people falling in love on an island and she would push that feeling deep down somewhere else.

You’re obsessed with being special, because nothing and no one is special in this place. It’s just a response. Aren’t we all just responding to our environment? Jen spoke while she lit a candle with a match. She was always buying candles that were too sweet, scents named after desserts. When Jenna said stuff like this Laurie felt maniacally powerful in her dread. The people on the island were playing a game, and Laurie turned to respond, but didn’t, and when she looked back at the TV one of the contestants started crying, and the other people huddled around her, saying words of affirmation.

Jen worked at a bubble tea shop during the day and danced at a nearby club most nights. She wore black to both jobs. The club had big red chairs, kind of like a movie theater. Laurie had only went there once to drop off Chinese food for Jen.

Chicken and broccoli? With the baby corn? Jen asked when Laurie entered the locker room, brushing up her eyelash extensions with her index finger.

Yeah, Laurie said, squeezing into a corner while other girls put on deodorant or talked on the phone. There were a few dancers crowded around a box of donuts. One locker had a picture of a cat taped to it. Written on the picture in red Sharpie was: RIP ST. AUGUSTINE.

Thanks. It’s a slow night. Slow season in general. My two songs earlier felt like a lifetime. The only guy on the floor watched me like I was a clock, or an old person sitting alone at a restaurant.

Laurie had never seen her friend in a locker room before. She pretended that they were in high school and it was believable. The harsh light made her feel like they were teenagers. It was a diverting concept. If they had found each other earlier in life, Laurie thought, maybe they would have had a flimsier type of friendship, one devoid of the intimacy they share now, or maybe they would have missed each other entirely. Only when Laurie thought about timing did she feel in awe of the world.

Okay, well. I’m gonna have to go back out there soon if I want to pay you back for this, Jen said when Laurie was silent for too long.

Oh yeah, I mean, no worries. Go get em, champ, Laurie patted her on the shoulder, as if Jen was about to play a volleyball game or something.

Laurie went into the main room of the club to find the exit but the DJ introduced someone named “Audi” to the stage, and when she turned around and saw Jen she choked on her spit. Her dark hair was curled at the ends like a thirsty plant. A slow song that Laurie didn’t recognize started playing, a song with heartbeat drums, and Jen looked possessed, a slight tremor to her, not a nervous tremor, exactly, but a buzzing that made you want to get up close to see if your eyes were deceiving you. The light was reddish purple, and smoke was coming from locations Laurie couldn’t place. Jen danced like she was trying to solve a math problem in her head at the same time. Which kind of sounds like a bad thing, but it really wasn’t. During her last song she got on all fours and looked out into the audience, opening her mouth a bit, concluding. The sight made Laurie feel as if inhabiting her own body wasn’t some unfortunate coincidence like she had always thought it was—it was perhaps a miraculous thing to exist near or adjacent someone like Jen—and tears fell feverishly.

The purebred dogs were the dumbest for obvious reasons. Laurie had been trying to train a french bulldog puppy named Reese for two weeks and she was starting to feel like a con artist with a low success rate. Reese’s owner, an older woman with drapey clothes from Banana Republic and frizzy black hair, would stand behind Laurie asking, How do I get Reese-y to want to be a good dog? It’s almost like he misbehaves on purpose. Treats won’t help.

Laurie definitely knew that treats didn’t help. Reese would sniff her hand for a second and then look up at her, his smushed face almost stifling a giggle. He could see through all of her and she could see through him. They were equals: ridiculous, lacking ambition, refusing to do tricks.

He just seems like a bored dog, Laurie said to the woman after one of their training sessions, unknowingly at the time, the last.

I see, she said. Thank you for the diagnosis. Can he be cured?

The commute home was absorbing in a way Laurie’s commutes usually weren’t. The downtown train was running on the uptown track, and when it arrived it sat in the station with the doors open for what felt like a long time. People would occasionally run through the open doors as if they were about to miss it, out of breath, their face alight with the knowledge that they were the lucky ones. And then their mouths tightened once they realized the doors weren’t closing behind them. There was a woman with a colorful headband ripping up some kind of document. She ripped it up cleanly and without anger. Rip, put the two pieces together, rip. Laurie’s life kept barking at her in this space between stillness and movement, saying: we can do better than this! And she recoiled into herself, her shoulder touching someone else’s shoulder. A man next to her was watching a video of two people salsa dancing and when the train finally started moving the video paused on them mid-turn, looking like DNA. It made Laurie think of Jen and the thought felt like a verdict of some sort. When the train emerged from the tunnel underneath the river someone started clapping, like we made it, and no one else joined.

Ashton Carlile lives in New York City and has work that can be found in SmokeLong Quarterly, Gravel Magazine, and Jellyfish Review.