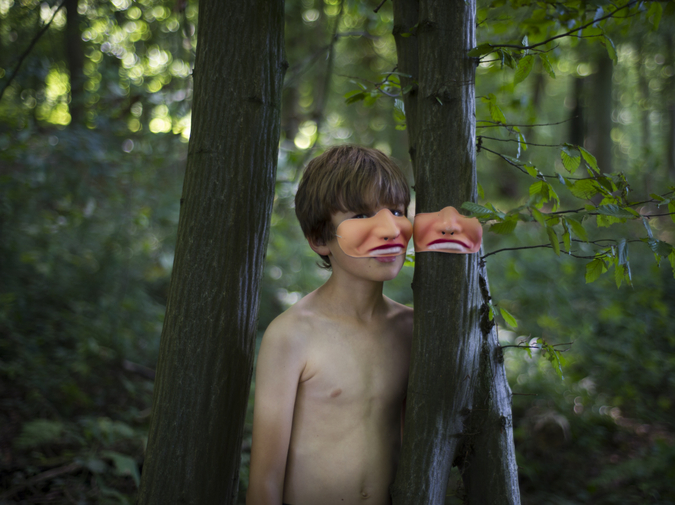 We stood there, not knowing what to do, so he lowered himself to the floor to show me how he slept.

“I'll show you something else.” He led me to a map constellated by gold stars. I asked him about the stars and he told me they were pools.

He brought over a cigar box.

I looked at the hair.

We kissed. My shirt opened. In the moonlight, the shadow of my belly was steep, but he didn't seem to mind.

A month later, I ran into him again. This time creeping along the edge of a gas station with a jug of milk. He squished his nose against my window.

“How come you didn't call?”

“Neither of us has a phone.”

He got in my truck and we headed for the river. It was spring. The water would be fast and cold. I parked by a bridge and we walked along the flooded bank. He stripped to his underwear then forced himself into the deepest part of the water. Barbed wire hung across, a property marker I never understood.

“I need to leave the state,”I shouted back.

After he collapsed onto the grass, I told him there'd be one in Fargo. If not, we'd have to drive to Minneapolis. I was only within legal range a few more days, but I knew too many people in Denver.

In the corner of the lot, a magnolia tree bloomed from a crack. Its petals were like thick, pink skin.

“The pools have lost and founds,” he said, pouring his bourbon into a flask. “We can hit them for shampoo.”

He started talking once we crossed the state line.

“I knocked up a gal in college. That was in the Dark Ages, around the time you were born.” He turned to me and winked.

“I took her to a guy who worked out of his house. He had a room in the back.”

“It had a cot with a shower curtain draped over it and a sink and a refrigerator.”

“I got this urge to open the refrigerator.”

I took the flask. “What was in there?”

“What was the doctor doing with nail polish?”

“I guess he liked to paint his nails.”

All night, I drove across the prairie as he slept. Every once in a while, a semi would come at me without dimming its brights and, momentarily, I'd go blind. In that second, the motion of things would slow down enough for me to wonder where I was going and what I was doing. Then, I'd be back on track, wishing I had some speed.

In the morning, we found a town with a municipal pool. We paid two dollars. I liked the place; I liked its warm sterility. I liked how no one knew who we were.

A woman wearing a plastic whistle was guarding the front desk. “Just so you know, the Waterlillies arrive in 20 minutes.”

“The Waterlillies. Synchronized swimming, ages 6-8. I wouldn't waste time if I were you.”

“Where is the lost and found?”

The woman pointed to a display of odd things on a bench.

He grabbed a towel and a bottle of shampoo and headed for the locker room.

In the women's locker room, I stripped to my underwear and the tatty bra I wore on account of the swelling. I didn't look bad, but the shape of things was obvious.

Three women entered through the pool door and stood beneath the showerheads, peeling off their suits. They were old; fat hung over their crotches. Their pubic hair had thinned away. One gave me the once-over. I watched the question form on her face, her decision not to smile.

When I arrived at the pool, he was cutting through the water with surprising force—so much that I thought about what I'd like to do to him after it was through. Then I remembered this would have to be weeks from now. By then, I wouldn't know where he was.

In a distant, hollowed-out room, young, female voices bounced off the walls. I looked at the surface of the water, the dark blue tiles below.