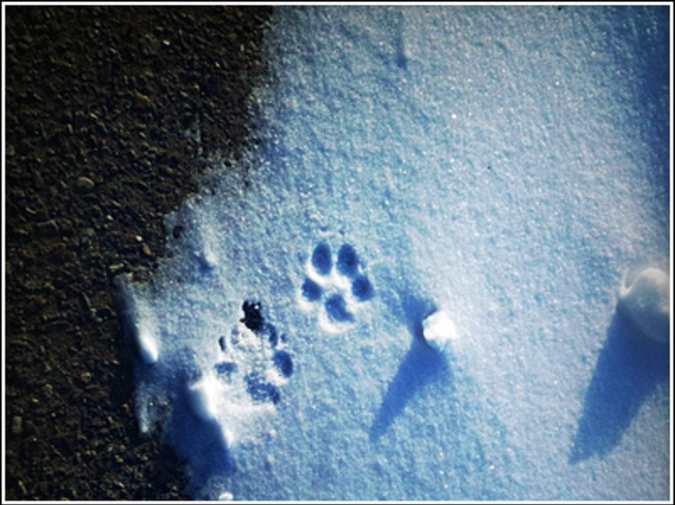 She finds me in the backyard, behind the fence. I'm not crying because I've never been a child who cries. Instead I stare at the way the fence posts overlap, rotting, green and all worn down smooth in places. I stare at the bare spots on the ground where grass never grows. Maybe there are tree roots beneath the earth. Buried pets wrapped in garbage bags.

She kneels next to me, bending over and squatting until, no, she isn't as tall as me, but she is so wide I can not see all of her. She stretches out and away and I can't see her mouth. I can only hear the words. She is saying sorry and I love you. She isn't crying. I've never seen her cry.

Thirty minutes later my dad is home and we all eat dinner at the kitchen table. She smiles and laughs, but her eyes are swallowed up by eyeliner. I am shrinking into my mashed potatoes, but eating them because I know if I don't eat them I will be so sorry.

My father tells me sometimes you have to agree when you know you shouldn't. That's how life is. He tells me how he never uses paint thinner at work and that parts of his building have had wet paint on them for ten years. He says it like he is proud. But I painted the building, he explains, even though it wasn't my job.

Maybe it is this or maybe it is his cholesterol, but one night his heart seizes, quits working. He pisses himself and is facedown on the floor when we wake up.

She makes blueberry pancakes, stirring the thawed berries into the batter until it turns purple, not blue like you would think. I ask her about the purple color and she pours the batter in the sink. She rinses it away with hot water and squishes the berries down the drain with a fork until they are gone. Steam rises up from the drain and I can still smell the sweet smell, until there is the bleach and the cleaning.

His old pajamas that smell like sour milk and beer are gone too. The bathroom drawer where they were kept is empty. The whole drawer is wiped clean and smells of bleach.

I take his jacket out of the hall closet and tuck it between my mattress and box springs, but eventually it is gone too and there is the smell of bleach again.

She explains there was never any college fund. That my father must have just talked about it and never set it up.

She spends $15,000 on her wedding, a third wedding. Her dress is bunches of white material gathered so tall around her that I can't see her face. When she speaks to me there is an echo as her voice bounces around in the folds of material.

The wedding is long. There are five songs played while she and my stepfather hold hands and stare at each other. The people sitting in the pews shift their weight and cough, alternating between staring at her and the floor and the space between their own shoes.

The wedding march plays in our house for weeks. We eat cocktail sausages and dried out cake for dinner until it is gone and then we eat cubes of ham and soggy watermelon from the fruit trays. Then we begin to eat in front of the television on T.V. trays. I don't know where the T.V. trays come from, but one day they appear in the living room, leaned in the space between the couch and the wall.

It is summer and she grabs my aunt, her sister, by the shoulders and shakes her. The dogs are on the other side of the fence and they are shaking too. Half a dozen white pit bulls all trembling and cowering and hiding their faces beneath dirty paws. The dogs start to whine and my aunt yells on pitch with their whining.

I can hear the lawn mower in the backyard. The thing sounds like it ran over a small tree and is hacking it up to sawdust and junk wood that no one will ever use.

She cuts my hair in the back of her salon. Not the front where all the customers are, but the back room where old women are smoking and reading romance novels aloud to one another. All the books' pages are yellowed and thick like they've absorbed smoke and spilt tea.

She tells me she didn't know she was pregnant with me. She tells me how she jogged laps around the track while my brother played nice in the sandbox. She never got the weight off. Her stomach bulges and doubles over itself, flesh hugging flesh and dimpling until it looks like raw ground beef. She tells me her belly button ran away, so I sleep face down with my hands clamped tight around my stomach.

Other nights she lays in bed beside me, too close, breathing on my face. Her breathe is hot and smells like bleached ashtrays.

She whispers that her first husband beat and raped her. She says it wasn't rape back then, not if he was your husband and you were his wife. She tells me that she heaved my infant brother across the room. He landed on the couch but slid off and busted his head on the hardwood floor. She watched him bleed and listened to him wail while her husband raped her. She says that six months later she had a miscarriage.

I watch her going into the men's restroom. I find the women's restroom across the store. When I meet her at the store entrance she asks why I keep wondering off and she grabs me by the neck, twisting the skin and pulling it, digging in with her nails.

Later she calls my brother and describes the marks on my throat. She talks about them like they are beautiful, something to behold, something that she has accomplished.

She makes me sit in the car and wait while she eats lunch. We're at the Mexican restaurant, the only one in town. Waiters come out the back door and pour grease onto the pavement. It runs between the cracks in the gravel and down into a drain.

Brandi Wells has fiction in or forthcoming in Improbable Object, McSweeney's, Bust down the door and eat all the chickens, Smokelong Quarterly and Apt****. She has a chapbook forthcoming as part the chapbook collectiveFox Force 5, which is being released by Paper Hero Press.