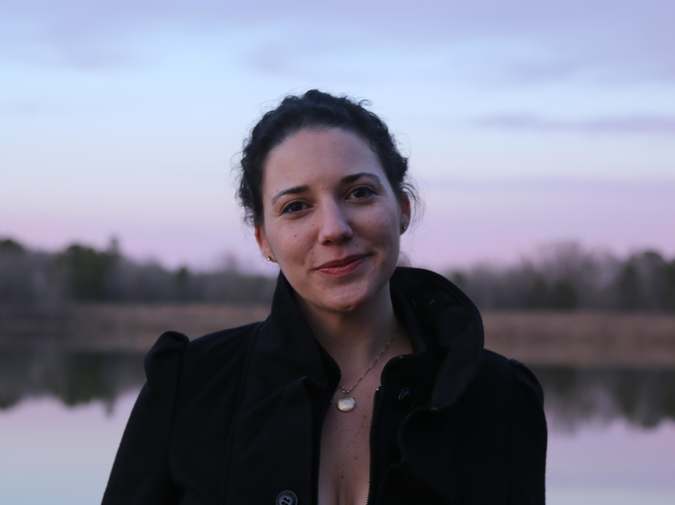 Julie wrote a story about an unnamed woman who poisoned her husband and it was a very good story, one of her best. It was published in a national magazine and she received a check for fifteen hundred dollars, which she cashed and put in a sock. She had always wanted to put a wad of cash in a sock.

In the story, the man died and the wife got away with murder. She named the husband character “Davey.”

She’d left the magazine on the coffee table and run a bath, knowing that her husband, whose name was David, would come home on his lunch break and read it. She spent more and more time in the bathtub, and spent a lot of money on bath salts and bath bombs, soaps and shampoos and hair masks. She bought a lot of candles, too, which changed with the seasons. Since it was summer, she lit Wood Sage & Sea Salt and Beach House. As she soaked, she thought about how easy it would be to knock one onto the bathmat, how long it would take for the bathmat to burn and whether the fire would put itself out once it reached the tile. Or would it jump? She would like to see it jump.

When she thought about herself, the only thing vaguely interesting about her life was that David was her third husband. She married her first husband at twenty-two and the marriage lasted less than six months. She married her second husband at twenty-six and the marriage lasted five years. She married David at thirty-three and they had been married two years and eight months and one day. She counted the time like a prison sentence, like a recovering alcoholic.

She heard the back door open, her husband call her name.

David never bothered her when she was taking her baths. He never knocked on the door or made her feel hurried. It was his very best quality, she thought.

She couldn’t stay in there forever, though, so she got out and wrapped her hair in a towel and put on her zip-front mumu.

“I’m reading your story,” he said, which she could see. He also had a plate of spaghetti that he was working on.

She sat on the opposite couch and watched him. Some red sauce splattered onto the magazine’s pages. She had recently seen a friend’s social media post that said something along the lines of, ‘if can you sit next to someone eating a bowl of cereal and still love them, congratulations, you’ve found your person.’ She could not imagine, not in her wildest dreams, not wanting to murder the cereal-eater next to her.

When he was finished, he looked around their living room. “I like the setting,” he said, “Though you might have added a few more details. I’m not quite getting the visual I’d like.” He paused and bent over his plate, slurped some noodles. Julie had boiled them the night before because she’d read that refrigerated noodles have less effect on one’s blood sugar. “But overall it’s really solid,” he said. “I like being the villain.”

“Thank you,” Julie said. “But it’s not you in the story.” She refused to explain fiction to him again. Everything is a lie and everything is true; that’s all she wanted to say about it, all she would ever care to say.

“But you named him Davey and my name is David. You might change it up next time.”

“And you named the neighbors after our neighbors.”

“No, I named the dog Biscuit and theirs is Bisquick.”

In the story, the Cranstons were busy-bodies who always had their windows open, who made suggestions about the upgrades David and Julie needed to make to their house. There was a tree between them that dropped a lot of limbs that also caused tension. The Cranstons wanted them to cut it down and they didn’t want to cut it down. Perhaps, if they’d liked the neighbors more, if the neighbors weren’t always trying to get in their business, they would be more amenable. Julie could pay for the tree to be removed with her sock money.

“What are you doing tonight?” she asked.

“I’m all yours,” he said, and winked at her. This was her cue to scream, which was a game they played, but she didn’t feel like playing.

Julie and David didn’t have any children and there was nothing to do after dinner except hope that the other one went out. David would go see movies by himself because they did not enjoy the same movies. And he had his bowling nights and his poker nights, though sometimes Julie also went to his poker nights. There was a mutual friend at their poker nights she dreamed about a lot. She closed her eyes and there he was. Sometimes she took naps during the day so she could visit him then, too.

When her husband went back to work, she decided to write another murder story to entertain herself, just as her husband suggested. Perhaps she would kill off a man named Danny this time. Or Derrick.

She had previously done enough research to know that the best way to disappear is to go for a hike in the woods. Nobody is terribly suspicious if your body isn’t found because animals could drag you off or you could fall into a hole or off a cliff or you could be kidnapped. The important thing is to leave nothing behind. Julie had become interested after reading an article about the disappearance of a Canadian man at Joshua Tree. He and his wife ate breakfast and then he wanted to take a short hike before they went to the airport.

Dogs and drones and hundreds of volunteers found nothing. There was no evidence of foul play. He’d just vanished. Julie liked the word “vanished,” and repeated it to herself a few times.

The hiking trails in Julie’s area weren’t dangerous enough: no cliffs or bears or extreme temperatures. This was a problem. She decided to set the story in Glacier National Park, where she and her husband had once visited. The woman in the story could push him off the side of the mountain. Perhaps the woman would grow light-headed and ask for help and then give him a shove at just the right moment. Julie wondered if her own acting chops were up for it. Policemen would be suspicious; she would have to cry a lot. She would have to make sure no one took a video of her dancing or otherwise enjoying herself for a long time after. The thought of this irritated her.

She looked at some pictures of Glacier on her laptop. There was one of her husband on a shuttle going up the mountain, giving her a thumbs-up. They had had a nice time on that trip even though one day they’d taken an eleven-mile hike without nearly enough water and were taught a serious lesson in preparedness. She’d had to beg from passersby in the final mile and David had been humiliated.

She lit a Beach House candle and wondered why her sister, who had a beach house, didn’t invite her to visit more often. Her sister had a boat, too, and Julie liked boats. She thought about boats for a while and closed her eyes and there was the man, the mutual friend, their hair whipping their smiling faces. Boats were also good for disappearances and deaths. She had known two people that died in boating accidents—one had fallen into the water and hit his head, drunk, and another had gone off into a storm and never returned, also drunk. She made a note of it for another in the series.

When David returned home, Julie was hard at work. She had never been more excited to write stories. She thought it would be easy to write a whole collection so long as a man like her husband was murdered in each of them. All she needed was the right title.

Mary Miller is the author of two novels, Biloxi and The Last Days of California, as well as two short story collections: Always Happy Hour and Big World.