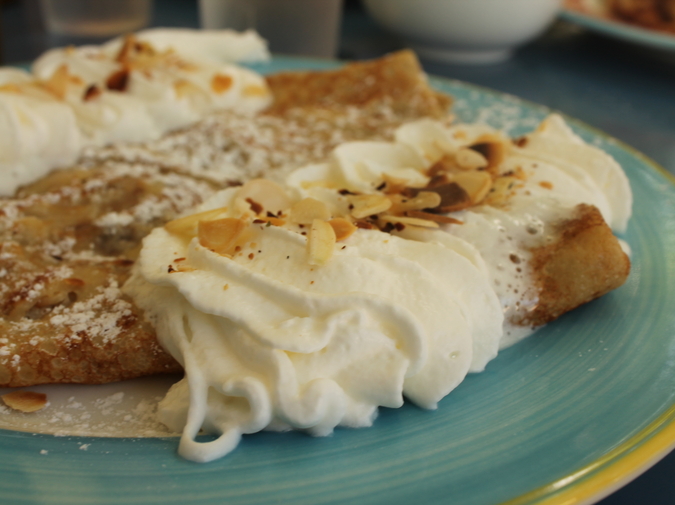 Back then I liked to stage major events of my life at a diner two blocks up. Its name I have forgotten so many times, its menu was a tumble of indifferent Southwesternisms, a game of bean-meets-cheese, but its soul of noise was good for thought. There were no leafs to eat and so no leafy sounds here. When the thick plates struck down, the brushed steel tabletops rang with the fleshed rattle of pneumatic stamps. The snap of paper, the bell on the door. The order window heaved out the kitchen's rich shouting and steam. It was a place that sustained a nasty kind of alertness, which on the occasion I am preparing to describe was less useful to me than I had expected.

In the corner I was raking eggs and potatoes and saying to Debbie, or failing to say: So maybe what we are saying here is.

Stopping there, I leaned the rest of my meaning across the table.

She answered my tangle of inveigling humaneness with a crash of tears. Bless Debbie, she was a messy weeper. I watched a gobbet of sputum drop neatly into a compartment of her waffle and fill it up, flowing with the same insistent languor as syrup.

Maybe that is not what we are saying, she said.

A problematic combination of revulsion and regret clanked through me, like a man with one long leg. I saw that one of these things would soon fashion motives for me. The revolving lump of breakfast within me became an emptiness. I hungered now not for food but for fancy.

So I stared into the snotful wafflebox until it became large to me, and then I strolled the brink of it, whistling a tune. Debbie vanished into hugeness.

At a wafflecrossing I sat to ponder. Debbie has wept upon this waffle, I said to myself. I did some time-traveling, reconjugating as I went: is still weeping, will have wept, will well yet be weeping—did that mean that I had not, would not have, in fact was not...? Yes. The plan was on hold. It had never been a plan. An amazing sea of agreement was swallowing us.

I swung my legs above a puddle of butter, marveling.

Peering upward from the surface of the waffle I gave no report. A great giggle was wrestling my mouth.

Clambering over a gashed ridge, I reasoned that it was necessary to populate the waffle. Therefore I produced a waffleman and a waffleboy. Herders, I think I styled them: cloaks of frightful hide, the man stooped under curses and carrying a stick, and for the boy a pair of fast, hateful eyes.

I watched them approach and wondered what else about them would be mine to decide. They asked me: Where do you come from?

In reply I spread my arms, as though to hug the heavensworth of Debbie above us, or to catch something bigger than all of us that was falling.

Unanswered by this, they frowned and shifted their skins. They knew that already.

The waffleman propped his stick on his hip and insolently fingered his beard, and the boy, with something rising in him, shivered stiffly.

Where! said the boy. He bared his teeth. They were the little kind, with many gaps, and through each gap shone a special shade of blood.

Oh I see, I huffed. I put my fists on my hips, turned my toes outward, and tottered like the Little Tramp.

The old man grew dark with thought as he took a moment to cross out various hopes for diplomacy within. The boy slipped a Swiss Army knife from his cloak and assumed a sort of truculent shrug as he selected a blade.

Now there’s-a neat-o, I said. What’s that pelt you got, kangaroo?

Let us suppose that my mouth moved in both dimensions. I had myself outnumbered. Waffleside, the voice of me above me was a lone pole against a skysize sagging, a pucker spoken into cloth.

Then the devouring vastness of Debbie above us shook, or we shook for her. There was one fat pulse with a chatter of afterpulses inside, a volley of stray rhythms that I felt as a motion of her body and as a sound. She may have coughed, or sniffled, or wagged her bottom against the vinyl banquette, or loosed a retch of bad laughter.

The boy snicked his sharp out. The old man withdrew behind a mask of giddy belligerence. In the quake I clutched at the flyaway scrap of my pity, which was all too small for us.

I said: I will answer your question.

I performed a greeting-dance. I ruled as I did so that this was their sacred tradition and so a fitting answer to their question. I slank through various symbolic postures and so told how Debbie and I had met on a bus all furred inside with wet stink.

I was standing, and as I grasped the strap and surfed the lurching and tried various stares on my reflection in the human way, the filthy man in the seat beside and below me suffered our road with the forbearing sorrow of a barnacle. Each pothole’s jolt freed a miasmatic plume from amidst his uncountable coats. When Debbie and I found one another we were swiveling from him in synchronized misery. Straightaway I smelled her, a large lime. Her gay fruit in the fug was like a radio station’s miraculous slice of the dial. I smelled like Windex and sweet bicycle grease. We gazed hard, co-willing a synesthesia, eyeing our smells into the channel of sight.

For the rest—courtship, or was it mating, or was it—I did a tap dance with three taps.

So timewise it’s out of proportion! I hollered.

But you asked where I was from!

Not where I went!

To insist on my dance’s finality I held the bow very long and low, until a phantom afternote of mighty music whished in my head. Then I straightened and staggered, sloshing back the blood. I balanced my grinning head atop myself.

It belonged to the old waffleman to say how I had done, but we all knew I had brought abbreviation to the point of sacrilege. The boy took his knife in his mouth and gave peremptory applause. Each blow of clapping seemed to stuff more fury into him.

Thank you, thank you, I said. A good clear stupidity had thunked down over my face. I warmed the knife with my look.

What else? asked the waffleman.

Nothing else, I said. Great question. (Defiance and spite were guiding me with a sick, dripping force.) Excuse me, I’m tired from dancing, and I feel like my breakfast didn’t go down right.

For fun, I put my hands on my knees and wheezed myself purple. I crouched and gagged until the old man stepped through himself, from embarrassment to noble anger. I saw the nourishing bloom of it in his eye, as his son removed the knife from his mouth with a hand that had grown loving. The boy’s elbow limbered, his body became liquid with violence.

There’s a second part, I said. It’s called For and Against. It’s two lists. I don’t like to perform it. There’s not a lot of action.

All that is left is an expanse of admirable attitudes. I can’t talk about any of it without lapsing into self-defense.

I told him then that I had come to kill his son, which I did as follows.

The boy bunched briefly at the knees. He smiled and his teeth appeared to sharpen in his mouth. Then with his knife up he came as an eel, in one smooth surge of lethal grace. But I was faster, with my poor magical mind. I soared outward like a star. Resuming my proper dimensions, I forked and ate him. I ate his wafflepasture. I gobbled his continent. He was a twirling spike in a slide of mush.

When my daughter at age two attained the special bravery that leads us to inquire after our origins and seek the disastrous knowledge that the world was somehow larger and more perfect without us and would be again, and that we ourselves and our pickpocket brains are each our own discordancy, I thumbed and smudged  out a revision in which her father, vibrant with joy, gobbled up a whole village of wafflepeople. Was this bad, did it hurt? No, the wafflepeople bounced down the hatch all cheery, because (and here I caught myself, not for the first time, mislaying a brick deep in her mind) this was their purpose in life, to be eaten in welcome of birth. They partied all the way down into Daddy’s gut. In their kindness they filled him with just an eensy hint of that jubilating fizz that would become her Mommy’s dear delight, that would be her.

Ask me how far I traveled from the truth. Answer: not so far that I couldn’t carry it with me. The old waffleman became the mayor, and his son worked a broom on the sidewalk in front of their pretty grocery store.

Down the years I see now a gaudy litter of discarded costumes all dead where they fell. On my way to Debbie I hopped into, and shuddered like a bunny inside, every affect I could perform, from Imperious-Weird to Garrulous-Vapid. Like many actors I did have a natural key. Mine was Dilatory-Expansive.

I lived with a woman we’ll call Denise for a few months many years before you were born. (So begins a revision still in progress. I'm organizing a new account of your mother and all her predecessors, founded upon the theme of leftovers. I named them Denise, Daria, Doris, and Darlene, which hurt me more than it hurt them.) When we made love I would become wise. She would retreat to the kitchen, where my teaching voice pursued her through the jitters of our routine.

The plates would strike down. Here. Eat. Am I ready, ready for what? I’ll tell you what’s ready, this is, now eat it.

She was not as something as your mother.

Upon the first bite I always, always (like this) popped my eyes open as far as they could go.

W.R. Porter lives in Chicago. This is his first story for Hobart.