Bars We Don't Fuck With 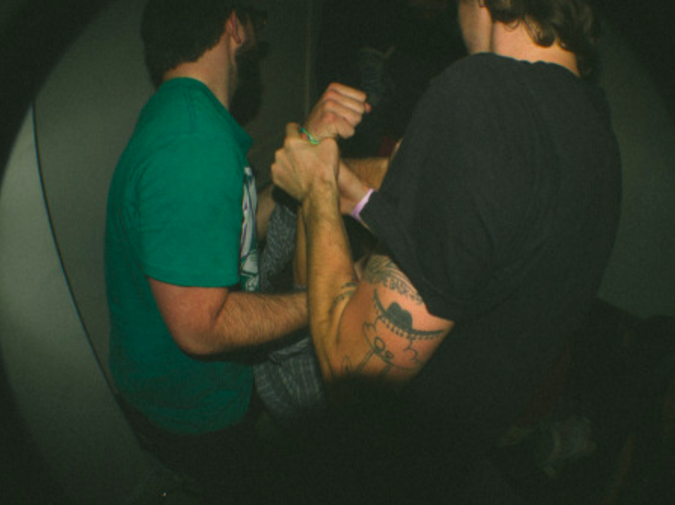 I was banned from Thomas Street Tavern last night. I’ve only been there three times in my life, though I walk past it most days while on pursuit to a place called, The Common Market, which is essentially a glorified convenient store with an outdoor patio. Idk what it is but I’ve never liked Thomas Street Tavern. It was even listed on the itinerary of “Bars We Don’t Fuck With” one night when my roommate and I got drunk and devised a plot to attend all of the neighborhood bars we never go to. The plan was to go inside, order a drink, feel uncomfortable and to not tip. And that’s pretty much what we did. On one of our stops we hit em with the ole drank-n-dash. We ordered a shot, pounded it and when the barmaid turned her back we literally ran out of the bar. We were in rare form that night but sometime during our sloppy trek around the neighborhood we stopped at Thomas Street.

But I think it was around a year ago when I first stepped into TST. A few local rock-n-roll bands I really fucked with were playing that night. Somewhere between sets I found myself on the outdoor deck of the dusty ole Tavern. There were a couple of sitting-booths out there, a fire pit, more seating, an outdoor bar on an adjacent patio and a fenced-in court for table tennis.

I struck up a conversation with two women in a red leather booth about rap music. They were typical white girls who wanted to argue who was better, Tupac or Biggie. I just wanted to talk about Danny Brown and Action Bronson. They had maybe eight or ten years on me but they seemed alright I guess. I sat down with them, sipped from my beer and spoke about other things that I cannot remember. I eventually excused myself, making way to the outdoor bar. I was already feeling some type of way from the alcohol buzz but the night was young. With hardly any head, the amber in my glass was filled to the brim. I could hear the next band sound checking and I tried to hurry inside. My balance was off so my beer sloshed with every step I took, moving further and further away from the crowded bar. I stumbled past the two girls in the red leather booth. Two more of their friends were now taking up space in the seats and they were all engaged in talk about anti-gentrification, which was ironic because we were in a gentrified area. I stood nearby unnoticed in a tipsy stupor. Out of drunken jest I swapped one of the original girl’s bottles for my pint glass when she wasn’t looking. When she noticed that her bottle had magically turned into a glass she was confused. When she turned her head to ask her friend what had happened, that’s when I made the switch. She had no idea what hit her and I walked away chuckling. I was just fucking with her because in my inebriated mind it was p funny. Apparently she didn’t find my prank too amusing because minutes later she approached me v angrily. I was thrown off. She was shouting in my face and she was mentioning something about me drugging her. I laughed because of how ridiculous she sounded but she wasn’t laughing. I tried to calmly and slowly explain my joke but she just kept repeating, “I don’t even know you!” And I guess she was right but I couldn’t explain my rationale other than I thought it was funny. One second your beer is there, the next second it’s a glass and then it’s a bottle again. Idk. So, she demanded that I buy her another beer because she thought that hers was drugged. I told her that it wasn’t, reminding her of my joke.  She retorted by mentioning that she had no way of telling whether it was or was not drugged. I told her to believe me but she didn’t trust me. She continued to insist on me buying her another drink but I continued to refuse because I was really broke at the time and I knew that there was nothing wrong with her current drink. It was a mundane back and forth and I was tired of it. I ended up just turning my back, ignoring her shouts, returning inside and listening to the music.

Moments later I felt a tap on the shoulder and it was a bartender asking me to come and speak with him. I was annoyed that the situation had gone that far. But I explained to him what happened and my friend of five years stood up for me, saying I would never drug anyone and the guy believed us but still had to kick me out based on the accusation. On my way out, this girl that I had had random conversations with at shows and was always v nice to me spit at me and called me a disgusting pig.

I had forgotten all about this until I walked into Thomas Street last night to attend yet another show. A local band, Blossoms, had reunited for one show and I really wanted to see them live. Overall, the music last night was cool and enjoyable but I had been drinking a lot and was tired and ready to go home by the time that it was over. The only reason I stuck around after the show pretending to mingle was because I thought I had a shot with a person who was born female but preferred gender-neutral pronouns. So, they are talking to the guy who invited them out to the show or to one of the performers on tour from Boston and I’m chopping it up with a buddy. This friend of mine spotted a six-pack of Mickey’s—or hand grenades as he called them—but four of the bottles were missing meaning only two were left. The case was on top of a wooden cabinet and it was late and hardly anybody was around so he assumed someone had left the case behind so he reached up to grab one. My friend was really talkative and loud and jovial from all the beer that he had already consumed that night. He offered me the last Mickey’s and I didn’t really want it but he insisted that we drink them together. I reached upward to the top of cabinet, snagging the last one. The inside of the Mickey’s bottle cap always has a cryptic puzzle and I was more fascinated with figuring it out than drinking the beer. I couldn’t decipher one of the shittly drawn images, which was a key component in figuring out the puzzle so I chugged the beer and threw it away.

We continued to mingle for the next few minutes until we were approached by yet another bartender. He and the tall albino doorman were barking at us asking if we drank those Mickey’s and I told them that someone left em behind, so yeah. He was quick to correct me, “Nah, you fucking stole em. You’re a fucking thief!” Shit escalated very quickly. Seconds prior I was talking about the Boston band, Speedy Ortiz and now someone is shouting the word, “thief” at me like at the end of that one Italian movie about the bicycle.

I was a bit stunned by their overreaction and began laughing a bit. I calmly told him that it was all a misunderstanding but he wasn’t having it.  Suddenly, the entire bar staff crowded around us, looking down at us with judgmental eyes. There were at least a hundred of them. Considering how menial their jobs were I bet they were craving any kind of excitement. As they crowded around, shouting and berating us, my friend was being super apologetic claiming he wouldn’t have taken them if he knew they belonged to the bar but it was only adding more fuel to their fire. They called us liars and pieces of shit. With all those people closing in on us calling us names and shouting and with it happening so quickly and suddenly, I began to feel a bit baffled. This short, bearded ginger guy who bartends at another bar that I actually fuck with was working at Thomas Street that night. He emerged from behind a few of the angry people with sympathetic eyes asking me, “Why man? Why’d you do it? I know you’re not a thief. You’re too smart for that.” I told him it was a genuine mistake; we thought they were left behind. He looked at me and said, “Well, you gotta pay for it.” And at first I thought he was gonna fight me but then I realized what he meant and I was relieved. I thought, “Great, a means to an end. Le’s get this over with.” So, I walk to the register located behind the bar and gave the lady who had been serving me drinks all night my card and she swiped it. $5.74. I didn’t tip.

The fucking lynch mob continued to surround us, telling us to leave, shouting that we were banned and that we were thieves (even after I paid for it). They were idiots. Robots. Repeating the same shit over and over and I couldn’t help but laugh to myself and ignore them as they trailed behind me on my way to the door…

Victor Freeze makes money for a living, tweets, and will work for food.