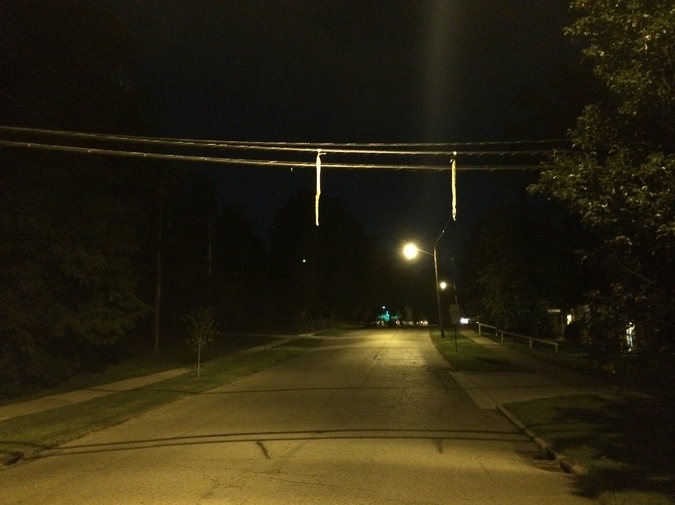 At eighteen I got two stars tattooed on my ankle. I used to tell people a variety of stories: they were falling stars, they were the stars from Peter Pan, they were the North Star and its unnamed companion. So many fabrications, all to hide the idea that those two stars didn’t have any meaning at all. Because the stars are supposed to have meaning. They’re supposed to act as a guide. And maybe that’s what I was really looking for: a guide into adulthood. But I don’t think so; I think I just liked the way they looked.

I read that the word disaster comes from the Latin dis-, meaning without, and astro, meaning star or planet. Literally translated: without a star. Or planet. When ancient peoples planted seeds of origin, they blossomed in the sky: Orion, Andromeda, Cassiopeia, Lyra. These are, of course, only the Latinized sky-births; undoubtedly, those who escaped Latinization had their celestial anchors as well. When looking for answers, one does not look to the ground from which he clawed, into which he will deteriorate. What good does it do to study one’s own footprints? They’re so fragile, after all. But to root one’s origins in the sky seems so impersonal, so impossibly distant. Was that distance to ensure that our actions could not pollute the sanctity of our beginnings? To render our humanity inconsequential to our divinity? Or was it to ensure that our actions were weighted with consequence? To birth the promise of becoming something far greater than ourselves?

Sabianism—star worship—is the oldest form of religion. So old, in fact, that no one is quite certain who these original star worshippers were, though it’s generally agreed upon that the birth of the religion happened in a predecessor to Babylon. But to say that the worship was of the stars isn’t quite right. The worship was of the one structure that gives everything meaning: time. With the movements of stars, these early worshippers could begin to understand the concept of passage. Of forward. The concept of progression and, therefore, progress.

Is it any surprise, then, that sabianism morphed its way into astrology? Johannes Kepler dubbed this pseudo-science the foolish daughter of astronomy—but was she really a fool? Astrology was simply another layer of meaning. Time gave the framework for progression, yes, but progression toward what?

I, a Libra, progress toward balance. I must: it’s written in the stars.

The first galaxy outside of our own was discovered on December 30, 1924. It was named Andromeda after its location within the Andromeda constellation, which is logical nomenclature but confuses me nonetheless. Andromeda was the daughter of Cassiopeia, who was so smitten with her daughter’s looks that she boasted Andromeda was more beautiful than even the Nereids, the famed sea nymphs. This, of course, pissed off Poseidon, who sent a sea monster to ravage the coastal kingdom that Cassiopeia and her husband ruled. To save the kingdom, Andromeda was sacrificed. Stripped naked, chained to a rock, left to die. Though she was eventually rescued by Perseus, the constellation itself is the image of the princess chained down, primed for the ultimate baptism. A true sacrifice for the gods. This is the name we chose for the first galaxy, the first indication that we were not alone in the universe.

And what of Cassiopeia? She has her own constellation as well. The image of a queen lavishing in a throne, perched in the stars right next to her struggling daughter. From their celestial renderings, you would think Cassiopeia sacrificed her daughter willingly. It wouldn’t surprise me; we tend to destroy the ones we love best. But still, Cassiopeia only has five stars. Now Andromeda has an entire galaxy. Maybe that was our way of saying sorry.

When I look up the word apology, I see it comes from the Greek apo, meaning away or without, and the Greek -logia, meaning speech. Apologia is defined as a speech in one’s own defense. When I look up excuse, I see it comes from the Latin ex-, meaning without, and the Latin causa, meaning accusation or cause. Excusare is defined as freeing from blame. I don’t see how these these two definitions are dissimilar, except that the etymology of apology also takes me to legend or myth.

I don’t cry until I do, all at once, naked, in someone else’s bed. Not good timing. I close my eyes and see constellations, memories of another man hole-punched into the tapestry of my mind. I open my eyes, but they linger. To the man beside me, I want to say, I’m sorry, I was supposed to be okay by now. Canonization in confession. But I don’t. Instead I think, Would it be worth it to be reborn? Outlined in fevered white? It’s possible Andromeda didn’t get the worst of it: she was also forsaken by the one she loved, but at least she got something in return.

All I have is a shudder running across my shoulder blades. He runs his hands between them and tells me that it’ll be okay, that this nebulous hurt will desist. He’s right; it will. But I can’t stop crying, can’t stop my eyes from becoming the sea. And I can’t find the words to tell him that what hurts the most right now is how sincerely he cares. I don’t have a galaxy to give.

I’m beginning to understand religion, the vehemence with which one defends the virtue of each act against them. It must mean something, yes? There must be a reason our ancestors rooted us in the stars, in something so vast and unknowable. There must be some sort of reward for pain endured, some sort of retribution for those who enact pain against us. But I think all this means is that I’m eighteen again, looking for substance within a simple outline.

I push the heels of my hands into my eyes and smudge away tears. I roll onto my side, toward him—progression. I reverse the magnetic pole of my touch, align it with his—balance. Maybe I don’t need a galaxy to give. We’ve never owned the stars anyway, not really.

The stars call out to them, soothing, tide them from their beds and out onto the shore. Farmers and weavers and cooks dipping toes into water. Then ankles, then thighs. The sacrificial baptism—worth it, they say, for rebirth as a star. By day, smiths sting silver into the glow of corona, celestial sliver to adorn the skin. Tailors crisp lines to parallel five points: four elements, one soul—all grasping for eternity. Women beat stews with spoons, beat rugs with spoons, beat children with spoons, look up at night at the deathless and ask: Was is worth it? The suffering of this world. Would you do it again? The deathless smirk back. Why answer? The soapbox chirps: Who has forsaken you? Thy father? Thy mother? Thy friend? Thy lover? Let them be canonized in confession. Who could resist the allure of infinity? To be a star; to be eternal.

I keep a bottle of whiskey next to my bed. It reminds me of my imperfections, of my unfailing humanness. The burn is my inclination to hurt myself, the intoxication my proclivity to fuck. I watch the meniscus creep lower and lower and feel a humid sense of pride at my ability to enact motion. I am not divine; I will never be born again in the sky. But everyone I’ve ever loved has become immortalized in my sky: a stint of royalty lounging adjacent. They come to life in fire—first in my throat, then in my blood. I do not want their origin story, do not want them written in stars, do not want the foolishness of astronomy's daughter. I do not want to believe that each act against me must define what comes next. I shut them out. But still, I think of Andromeda. I think of progress, of balance. So I baptize myself in whiskey, hoping to find a galaxy in this night sky.

Savannah Brooks is a graduate student pursuing her MFA at Hamline University. When not reading or writing, she can be found at a dive bar, on her bike, or lounging at one of Minnesota's 10,000 lakes. She lives in the most beautiful literary capital: Saint Paul.