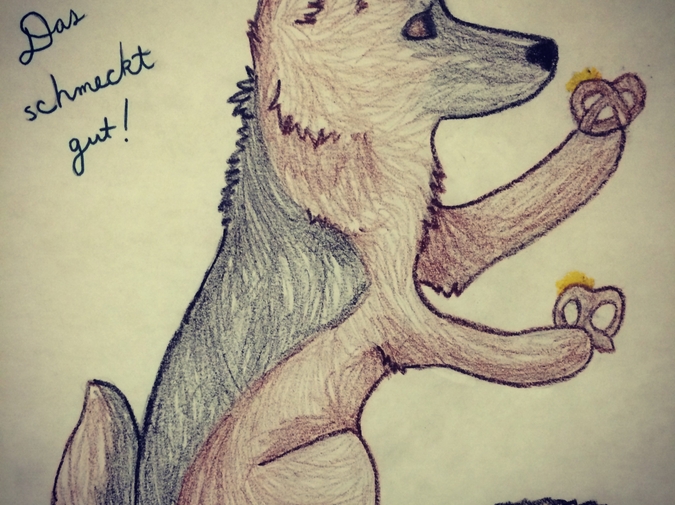 I work at the hospital for the criminally insane, running a school program for the patients. I want to have an on the job anxiety attack, to prove I’m normal. “If I don’t freak out here,” I tell myself. “There must be something wrong with me.“

I count the number of murderers in the class. There’s eight, including child and multiple killers. The five other students have raped, assaulted, arsoned and robbed.

“Can we play a game of scrabble?” asks Amad, who killed his brother for not handing over the channel changer.

“Um, twenty more minutes,” I tell him. He nods and winks.

When I imagine a pounding heart, sweaty brow, dizziness and nausea, I begin to feel it. Maybe that anxiety’s always lurking underneath, ready to come out at my command. That’s far better than it being unpredictable. If I can’t control my anxiety, anything can happen.

“Hey,” says student Jerome, who’s doing research using the computer internet. “Is this appropriate for me to look up?” He shows a site for Satanists. “If people can look up Catholicism,” he continues, “Why can’t I look up devil worship?”

“All religion is taboo,” I tell him. “Unless it’s history.”

His mouth turns down and he turns away. “You have no insight,” I want to say, but I need to put a lid on my feelings, to be efficient and safe. I’ve done this for the seventeen years at my job. I’ve played a certain role which has now become my entire work personality. I’ve never been physically attacked, and I put it down to my outward attitude, besides a lot of good luck.

I imagine I’m peering through a window at the class. The glass is a barrier, a boundary. I’ve been trying to keep that glass in place for almost two decades, but it keeps slipping.

I’ve been awakening in the night with palpitations and dread, after bad dreams of floating on rafts through underground sewers and opening doors to hell. I have to roll myself up out of bed and flee outside, lope around for an hour or two at 2 a. m. to get settled. I always run by early morning men pushing shopping carts full of bottles and cans. The rattle of the carts distracts me, takes my attention away from the pounding heart.

Now I want my pounding heart back. I’m in a room full of killers. Maybe I want to feel the truth.

It could be that I don’t want to work here anymore.

Student Amanda raises her hand. I go over.

“My name is Amanda, right?” she asks.

Conversations are often slightly out of line, like this.  Sometimes they’re seriously flawed. Four days before, patient Jazzy went out for a break, to smoke a cigarette just outside the building. He stayed out there a very short time, then he threw the door back with a bang and stepped in. “There’s a patient knocked out on the cement!” he announced. “I think he might be seriously hurt.”

I stepped outside. Patient Graham lay on his back on the concrete atrium floor. Blood flowed from beneath his head. “Hey, hey, are you alright?” I yelled, pulling my emergency pen.

I listened for his vitals. Breathing. Heart beating. Things were looking up.

“What happened?” I asked two patients sitting on lawn chairs puffing away on their work break cigarettes.

“Graham was talking shit, as usual,” said one. “Somehow he fell back. I didn’t see anything.”

“I didn’t see anything either,” said the other guy, taking a big drag.

Back on the ward, I talked with Jazzy’s nurse.

“Write up a report,” she said.  “I think our man was provoked. That Graham is always provoking people.”

I wrote the details in Jazzy’s chart and fired off an incident description to my supervisor.

The next day, my supervisor called me into her office and asked “Did you make sure you wore gloves when you examined the patient?” When I said I hadn’t told me “this is a serious violation of the safety policy.” That was about it for the supervisor input.

The next afternoon, I met Jazzy walking around on the grounds. “Yeah, they said they’d give me another chance,” he said.  “Because I was honest.” Graham, on the other hand, sustained a concussion and sat in his room, convalescing in a wheelchair.

That night, I woke up in the middle of it with my heart pounding. I had to walk down to the sea and along Kits beach and jog up and down Arbutus Hill three times to exhaust myself.

Now I stand in the class, wanting to bring on anxiety.  “One of these people could snap at any time,” I tell myself, and I feel my veins swell a bit.  I think more about the crimes the students have done.  “If I tell Jerome he can’t look up Satanist sites,” I think, “Maybe he’ll stab me in the jugular with his pen.”  That also seems to raise my blood pressure a few points.  “Maybe I’ll have an aneurism,” I think. “I can feel my brain arteries straining.”

I tell myself again, “any normal person would be nervous here,” and I want to be normal.

Two weeks before, a teacher visited from the community to observe my class. We watched student Robbie C. write his Science test.  “Doesn’t that guy seem normal?” I asked the teacher.  “He’s concentrating, he’s alert, he’s got his pencil rolling like a pro.”

The teacher looked at me.  “No,” he said. “That guy does not seem normal. Have you looked in his eyes lately?”

Then I remembered Robbie C. had chopped up his room mate and stored him in the freezer.

“Well,” I said. “If I didn’t know he was the refrigerator man, I’d never have been able to tell.”

“I didn’t know he was a refrigerator man,” said the teacher.

These days I wonder. If I can’t tell that other people are normal, how do people find me?

I ask a number of my friends and they say “You do have some eccentricities.”

“You seem so calm all the time,” they say. “Like, you’ve got one tone and that’s monotone.”

“Can we have that game of scrabble now?” asks Abad.

He looks at me. “My name’s not Abad,” he says, his voice rising.

“Hmmm.  Do you mind if I call you by your last name? O.K. that’ll be good. Indeed, let us play some scrabble. Or maybe “twenty questions.” I’ll turn out the lights first,” I say. “There’s plenty of sunlight through the windows.” I gesture to Amanda, who’s staring into space. “Do you want to play?” I ask her.

“Maybe,” she says. “Maybe I should have worn a bigger belt today.”

I decide not to be normal right now. I will tamp down that anxiety,  because it can be catching. If I’m not staggering around having a nerve attack things will go much more efficiently. I need to be efficient. I’ve earned almost thirty dollars in the hour I’ve been managing this class today.  So maybe it’s worth it to mull things over. Jerome waves at me from across the room. “How about if I just read about Charles Manson?” he asks. “You know, concentrate on the man, not the ideology.”

Jerome’s in Forensic for undertaking a pagan ceremony which ended with him slitting his girl friend’s throat. She didn’t die, though. She still comes to visit him regularly, a huge scar across the side of her neck and a big smile on her face. I sigh. I feel very calm.

“Come on over and play scrabble,” I tell Jerome. “It’ll take your concentration off all the craziness.”

The whole class laughs. Because of my state of controlled efficiency, it takes me a while to understand what they find so amusing.

Harrison Kim lives in Victoria, Canada, and has published here and there. For twenty-nine years he worked as a teacher at a Forensic Psychiatric Hospital. Visit her blog.