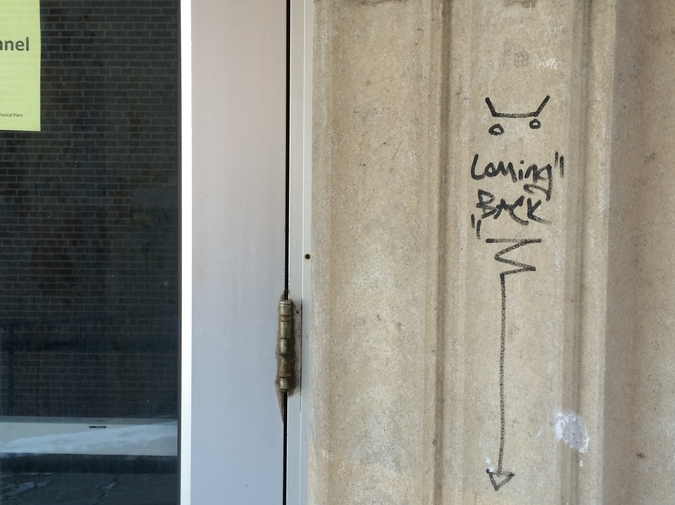 In nearly every used book—bought, borrowed, or salvaged—I’ve found them. Some are calculated: question marks that lurk and doubt, circles that capture typos and enigmas, underlining so bold it embosses the page’s backside or so wispy it whispers apology to future readers and the book itself. I’ve seen flamingo-pink highlighter and wobbly brackets, penned smiley faces and WTFs, bent or creased page corners announcing I’m leaving, promising I shall return.

I remember the context of only a few. In Simone Weil’s Waiting for God, loaned to me by a professor, vertical lines and checkmarks paralleled passages about attentiveness and prayer, and brilliant scrawls required my attentiveness and prayer to decipher them. In a volume of The Best American Essays, lent by another professor, marginalia illuminated the essays’ machinations with such precision that I photocopied them for keeps, never telling their scribe. Two winters ago I bought Olive Kitteridge off a used book cart in Tucson and afterward noticed on its front cover a faint, penciled reminder to call Kevin, followed by a phone number. I pondered this note for days, my dislike for phone conversations scuffling with an inscrutable desire to call Kevin.

The impulsive or accidental ones are, like candid photographs, the most interesting. I’ve observed stains in yellow, red, brown, black, orange, and green in shapes ranging from the semicircular partial stamp of a coffee mug to the liny oval of a fingerprint to the indefinable splotch of a mystery substance that spread according to its viscosity, the page’s curve, and the book’s tilt. Textures, too, vary; some are smooth and watery, others powdery and patchy, still others crusty and crackled. I’ve passed my fingers over them, feeling the ridges and waves, the arcs and flecks, and immersed in the strangeness of the act forgot my own strangeness. On the lone occasion I encountered a blood smear, I didn’t touch it but wondered at its source—nosebleed? torn cuticle? paper cut? Was the reader so lost in the words that she didn’t notice her discomfort? Or could she not bear to depart the character she inhabited, even for a bandage? Where there’s blood, there’s a story.

Once I came upon the corpse of a housefly that had been smashed and abandoned between the pages. Startled, I closed the tome with a thwack, flattening the fly anew. There are worse ways to go.

Friends have their tales as well. A pet-loving pal witnessed jacket corners being chewed by canine canines and pages punctured by parrot beaks.  Another found in a library book the brittle residue of a nose-blower without tissue or shame. A librarian friend and her colleagues play guessing games as they process returned items: Bong water or urine? Soup or vomit? It’s actually not too fun, she said. Some confess to their own disasters. One medicated Harry Potter and the Order of the Phoenix with Nyquil. Another forgot his books on his car roof in Walla Walla and they scattered about Route 12, where a semi branded them with tire treads and gravel.

I’ve left a few traces myself: drips of chai latte and hot chocolate, smudges from buttery crackers and cheesy popcorn, drops from a water glass’s condensation and recently washed grapes. I sullied a friend’s volume with blood from a broken scab and in a morally debatable moment disguised it with a filled-in circle of ink, reasoning that the overt lie was better than the truth. Last week my hands, damp from doing the dishes, tarnished the velvety front cover of The World Split Open. Efforts to buff out the blemish with a napkin just streaked it like shoddily applied makeup. And thus its face has remained.

I’m also reticent about my marginalia. When duplicating book excerpts for classes, I White-Out every handwritten interpretation, snarky aside, and heartfelt hah, suspecting that my students might share my enthusiastic voyeurism, fearing what they might glimpse if they do. But that is unfair: What can be known about a person from a tittle of black, a squiggle of blue? How much of a whole can be identified from a fragment?

Knowledge—reading has taught me—is less important than understanding. Vestiges in books aren’t windows as much as they are companions. Purposeful or involuntary, palatable or unsavory, they offer community, a curious intimacy. They show us readers that others have gone this way, that others have considered, been adrift in, and gone to bed late because of these same sentences. They create a kind of book club where we don’t share space or time and may never be, or care to be, acquaintances, yet we intuit the subtext of each other in the underscored lines, the scribbles and erasures, the crumbs and iotas. We sense that a writer, her work, and her multitude of readers are points along one limitless figure.

The best thing I’ve found in a book, beyond the printed words themselves, was the bright-orange, blurry, unmistakable remnant of Cheetos. Eating them demands recklessness and produces a particular pleasure. As I stared at that electric Yellow 6, I imagined the happy crinkling of the bag, the roughness against the other reader’s tongue, the buzz in her taste buds, the crunch between her molars, her absorption as her coated fingers gripped the page. I’ve never felt closer to anyone.

Nari Kirk has an MFA from the University of New Mexico. She teaches college writing and lives two ferry rides from Seattle.