And It's Outta Here 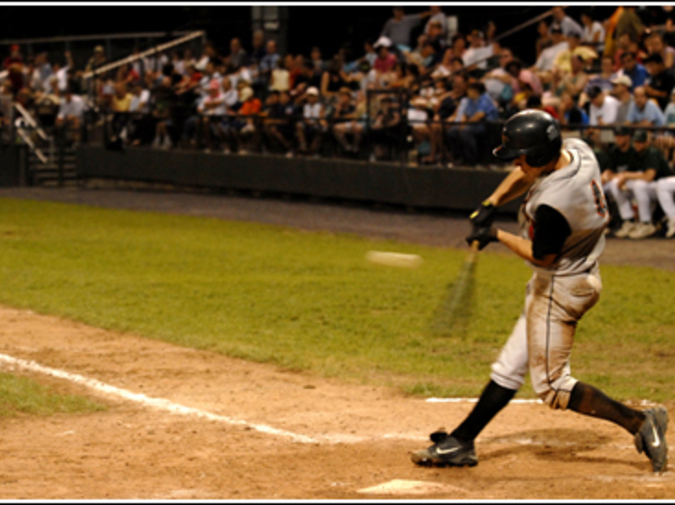 It's the middle of May, and the temperature has leveled off at a balmy 42 degrees at 7:30 p.m . This is why there were only about 15-20 people sitting in Section 12 -- or Section 14, or Section 22, and there were even less down in Sections 1 and 2 behind home plate. That, and it was a Tuesday night.

"YANKEES SUCK!" yells a guy sitting two rows in front of me, about eight seats over. He is, improbably, wearing shorts, and is draped with the fleece blanket that's a giveaway for signing up for a Newsday subscription. I glance at the out-of-town scoreboard for the AL and it's still 0-0 at the House of Evil. He yells it again, and this time, a guy in the front row of the section, wearing a Posada jersey, stands up and bows.

Behind me, the dad from New Jersey, with the endless supply of chipper red-headed sons, yawns: "It's too damn cold for this." I know that by 'this' he means the taunting, or rather, our inferiority complex that results in the chant being recited even when the Yankees are nowhere near Shea Stadium. Teeth chattering, despite the layers of wool and polar fleece, I agree.

The sisters from Middle Village who sit next to me are drinking their third beer, and even with their special Opening Day beer coozies protecting their hands, I don't know how they can do it. Mary and Julie always appear immune from the cold, chatting nonstop, sharing the box score duties, borrowing my binoculars to look at Jose Reyes dancing in the dugout or to examine David Wright's ass up close, or to argue about who is warming up in the bullpen. They wear a uniform of player number t-shirt over long-sleeve shirt and carefully pressed jeans. If it's cold, they add a black turtleneck. I have on a down jacket and a fleece blanket and I'm still shivering. Just looking at them makes me colder.

I briefly consider the possibility of attempting a sprint down to the Dunkin Donuts on the field level. It has to be that particular Dunkin Donuts because it is the only location in Shea Stadium that offers coffee in a cup size smaller than a thimble. If I time it right, I can get over to right field, down the ramps and back by the next time the Mets are up; I've done it plenty of times before and pride myself on my timing.

"It's May," says one of the twin brothers who sit in front of me. "Whaddya think you're gonna miss?" As if Lee ever left his seat except to sprint to the men's room between at-bats. He just wants a cup of coffee too.

The truth is I can't stand to miss anything, and I am too cold to move. Or rather, I have achieved something close enough to warmth that I am not willing to risk it by changing anything about my current condition.

I rummage in my bag for some snacks, thinking that eating will keep me warm, and distract me from the fact that Trachsel has slowed this game down beyond a snail's pace. The score is still 0-0, it's 9 o'clock, and we just got to the bottom of the fourth inning. The bag sits on my second seat, the seat between me and the sisters in seats 1 and 2. I own seats 3 and 4, the Tuesday-Friday plan, 24 games. Doggedly, I am here for every game, especially the games in April and May, when no one is here except plan holders, baseball-crazy teenagers, and the insane. I survive meetings on Tuesdays and Fridays knowing that come 5:30, I can change out of my suit, into my baseball jeans (stretched out just enough to sit comfortably for three hours), and ride the 7 train out to Flushing Meadows.

I own two seats, because he loved me and he loved baseball so I came to love baseball. When he left, I tried hard not to love him or baseball any more. The first I knew I had to do, but I realized I wasn't willing to give up the second. I wasn't willing to give it up because I had found my own refuge between the field and the sky, and because it still gave me part of him. As long as I still had part of him, somehow, it made me feel like the past five years hadn't been a mistake.

And, because he wanted those seats. Happily, though, the ticket account is in my name, so they were mine, free and clear. He's relegated to sitting somewhere in the upper deck this season, where the lines are long, the seats are not covered, and the wind whips mercilessly around the unprepared, including (especially) girls wearing kitten-heel pumps and carefully assembled date-night outfits, who don't even know about the existence of the infield fly rule, much less be able to explain it to you.

Top of the 5th. The score is still 0-0, and I'm shivering on the edge of my seat, waiting for the at-bat to finish so I can finally make my coffee run. Cliff Floyd comes up and touches his bat in the dirt to three corners of home plate, only three, just like he always does. The pitch comes in, the bat hits the ball and the sleepy Tuesday crowd roars to its feet as the ball sails up, over the heads of the Pittsburgh outfielders, just missing the Banco Popular sign. In that moment I forget the cold, the coffee, and my broken heart, and cheer number 30 as loud as I can as he rounds the bases and heads into the dugout.

"Can I borrow the binoculars?" Julie asks yet again. I shake my head no, gently. Now it's my turn to watch Floyd and Wright do their celebration dance.

"In case you forgot... YANKEES SUCK!" the cry goes out, one more time.

Caryn Rose was born in Paterson, NJ, one year before the Beatles played at Shea Stadium the first time. She is a writer, a novelist, and a photographer who lives in Brooklyn, NY. Her music writing can be found at jukeboxgraduate.com, and her alter-ego, Mets Grrl, writes about baseball and the New York Metropolitan Baseball Club, Inc. at metsgrrl.com.