An Interview with Rebecca Schiff 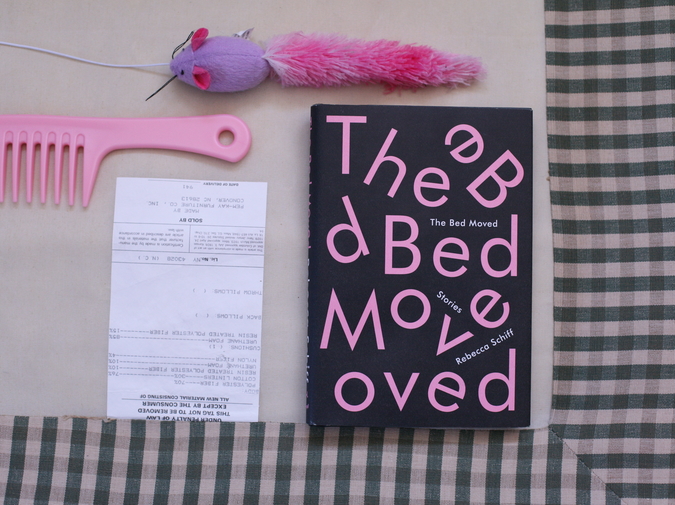 Short stories seem to be getting shorter and shorter. In a form that places a premium on concision, a writer is never supposed to take two sentences to say something that she could have gotten across in one. By attempting to reduce stories down to their most concentrated forms, contemporary authors have found new ways to satisfy and subvert the expectations of their audience.

Rebecca Schiff’s debut collection, THE BED MOVED, published last spring by Knopf, features a few longer stories, but most are in the one to five page range. They run the gamut from dense, Borgesian prose-poems to airy humor pieces, but each confronts, through its brevity, the reader’s relationship to narrative, laughter, and the darkness that lurks behind the unelaborated. “In fiction,” says the narrator of one particularly short piece, “it’s never benign.”

Schiff was kind enough to respond to a few of my questions via email regarding her brevity, her process, and the relationship between her and her protagonists.

How long a period of time do these stories represent? With first collections, I'm always curious as to how many years separate the oldest and newest stories, and how much they have evolved over time.

The oldest stories existed in some form for seven or eight years before I finished the collection. The ones I workshopped in grad school evolved a lot. Once I understood my own writing better, I still needed to edit, but early drafts of the newer stories are more recognizable as the stories they became.

I read that during your revision process, if there’s a line that you don’t think is funny enough, you’ll mark it so you can replace it later with something funnier. Why is it important to you that your stories be funny?

It’s important to me because I think there’s truth in humor, a way to connect with something more primal in people. And figuring out how to make a line funnier is hugely satisfying to me, like solving a puzzle.

Where do you think your brevity comes from? Do you think it’s linked at all to your sense of humor?

Who are the writers who you think have directly influenced your aesthetic? Where there any particular story collections you looked to when assembling this one?

Lorrie Moore, Leonard Michaels, Sam Lipsyte, Lydia Davis, and George Saunders have all influenced my aesthetic. Raymond Carver. Amy Hempel. Those Lish writers. I think Leonard Michaels's collection I Would Have Saved Them If I Could and Sam Lipsyte's collection Venus Drive were probably the ones I looked to the most. I read them so many times that they became part of me.

I really enjoyed the title story and “Little Girl,” which together form a sort of diptych. They both deal with women who sleep with a number of men. The stories are formatted as litanies in which the men are presented as categories rather than as named individuals. The effect is striking. The stories are part social commentary, part reflections of their narrators’ personalities. Was one written as a response to the other? What about that premise made you want to approach it from multiple angles?

I worried that those stories were too similar in form, but I wound up liking them enough to include both. The title story was a breakthrough for me, a realization that I could do a “list” story, or move through time in a less traditional way. I like the idea of the story telling you more about the narrator’s personality than about the guys themselves. She may feel like a failure or a little used and so making categories is a way to cope, to steal back the narrative and say “I was here all along.” I wrote the second one a few years later because I guess I wasn’t done.

Two of my other favorite pieces from the collection are “The Lucky Lady” and “It Doesn’t Have to Be a Big Deal,” which are on the longer side, comparatively. Why did those stories, and some of the other longer ones, compel you to flesh them out a bit more than some of the shorter pieces?

The longer ones are usually my favorites. Those two stories were about relationships (both failed) and so the male characters had to be more than just part of a list. When I find a story I can live in for a while, I get really excited and try to stay in as long as I can. Finding those stories doesn’t happen as often as I’d like.

In an interview you did for the Rumpus, Emma Windsor Wood asked you about the similar background shared by many of your narrators, and you said: “I need a story to be based in what I know in order to make things up…For some reason, I need the narrator to be a young liberal Jewish woman in order to write, but I also need it to be fiction. I’ve actually tried to write personal essays and it’s terrible. I don’t like writing about myself. There’s something about making things up from within a known place—that’s the magic formula for me.”

I was wondering why you’re terrible at personal essays. People expect, I think, for writers to be very confessional. And the whole wider American culture has become very confessional. Fiction sometimes feels like this oddly old-fashioned medium, with fiction writers being some of the only people who don’t actually want to share their personal lives. Why do you think you don’t like writing about yourself?

Maybe I was overstating that. In some ways, all I do is write about myself. But I want the distance to tell a story and the freedom to make the narrators somehow different from me. People who don’t know me well may see me as a nice girl. I’m little and I smile a lot. I listen. But in fiction, I can let my narrators be confused and self-centered and mean. I can put them through hell. I also find the other “non me” characters interesting and inventing them is a great pleasure.

Is there a certain experience you imagine that the reader takes away from this book? Like, “After reading THE BED MOVED, the reader will at least feel a little differently about…”? Or are your goals in fiction not so specific?

What are you working on next?

I’m working on new stories and maybe what I’m tentatively calling “a novella.”

Are there any authors that you’ve read recently whose work excited you?

So many. Ottessa Moshfegh. Deb Olin Unferth. Shelly Oria. I just finished a Melissa Bank collection from 2005 that killed me. It was probably an influence and I didn’t even know it.