An Interview with Leni Zumas 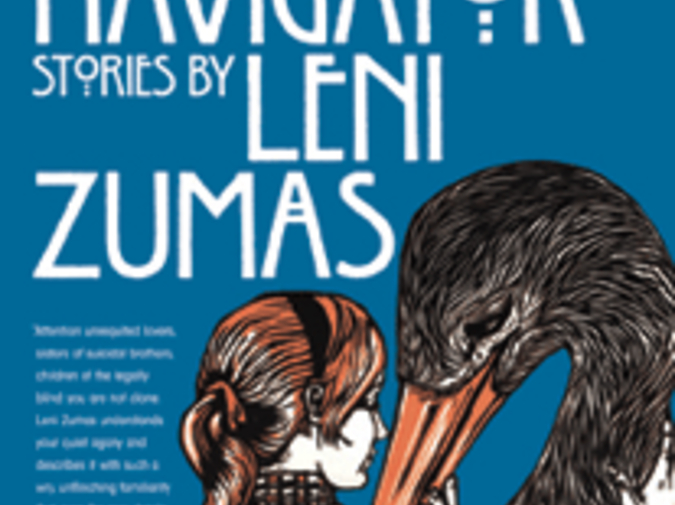 Leni Zumas' wonderful book Farewell Navigator is full of the kinds of stories I love and the kind of writing I envy. Every word is chosen carefully. Every sentence fits with the previous and the next. It's solid, brick-heavy writing.

And damned fun to read, too. This is likely because of how musical it seems. How happily the rhythms trip across the brain or--if you're like me--the tongue. (When I find a book I like, I read stories from it out loud. Alone. In my room. I'll admit it. I pretend I am reading to the cat. Sue me.)


I thought with the interview we could start here. When I was reading Farewell Navigator, I kept thinking about the sentence rhythms. I'm not 100% sure, though, if I was influenced by the fact that I know from your bio that you are a drummer in a band. Could you elaborate on the bio a little? Talk about your history as a musician and as a writer? Which came first? How the two creative impulses wove together and evolved?


Writing came first, at the age of seven, when my teacher asked me to read my story aloud on Grandparents Day and I thought, "Maybe I am good at this." I wrote all the time when I was little. I played piano too but was very lazy and did not, according to adults, live up to my potential.

In college I decided to start a band with my best friend. We were tired of always being in the audience at shows and of waiting for boys to finish band practice. We picked our instruments (I drums, she guitar) and, to learn them, played along to the Stooges, the Cure, and AC/DC.

I've been in bands on and off since then. My current one, S-S-S-Spectres, is a bunch of people in ghost costumes. Our faces are never shown in public. This is a proviso of our contract with New York Night Train Records.

Fiction is a very different creative process from music. It's lonely and (to me) strenuous. (Thomas Mann: "A writer is someone for whom writing is more difficult than it is for other people"). Playing in a band, meanwhile, is often fun. There is laughter. There is camaraderie. There is hitting things.

That said, if somebody with a gun ordered me to choose one or the other, I'd choose writing.


Were you a drummer from the beginning? When and if you play anything else, do you find yourself playing it for its rhythmic possibilities? (I'm thinking of Thurston Moore's playing on early Sonic Youth records...and, well, later ones, too?) All this to say: are you as consistently an consciously concerned with rhythm as I think you might be?


Yes, for sure, a drummer always. (Aside from the youth-piano.) I sing in S-S-S-Spectres, but even my singing is rather—unmelodic, shall we say? I chant, or grunt, or hum. The way we envision the vocals in our band is more about texture and rhythm than it is about catchy melodies. This is partly because I, for one, can't carry the best of tunes (although our bass player is a good singer) but it's also a question of style. We're not interested in making songs that follow a linear pop structure—the musical equivalent of, say, a New Yorker story. Ours are more phasic, associative.


Let's see if we can come up with an incomplete list of rhythmic strategies a writer can use, and talk about why you used them in specific stories. An obvious one is repetition. Here's the opening to a story that has a modified close third person narrator and a first person narrator—describing the relationship between a man and a woman—in a sort of duet:

"Waste No Time If This Method Fails"

He is the cutest at the franzy house.

He can hold his breath for three minutes.

He lies on his stomach when he pictures the fish-stick girl, so his roommate can't hear.

He likes to watch salt dry in bronchial patterns.


and then, later, the first person, the woman:

I dislike the word buttery.

I give the patients their three squares.

I have my favorites: the pigeon man, the periscope woman, the guy who intends to assassinate the president. And, of course, him.

I can't hold my breath for long.

I am thirty-one years old.


Add to the repetition of "he" and "I" for each paragraph the briefness of each, and you have set up an interesting pattern, sort of staccato. What sort of reader reaction are you looking for, here? What's the intention?


Staccato is a good word. I wanted a series of tiny stabs, almost incantatory. Did not want any connective tissue—transitions, dependent clauses, etc. I like using parataxis because it creates space for readers to draw connections, to be more invested in the making of sense.

In "Waste No Time," many of the one-line paragraphs appear unrelated, but the hope is that through recursion and accretion, meaningful relation will surface. Certain objects or images (breath, for example) return again and again, in different guises, gathering significance as they go. The repetition works not just as a sonic device, but as a lattice that carries—reveals—the whole story.

The form here also came out of my interest in constraints. Giving yourself a restriction, such as "Every sentence must start with He or I," can be an incredible stimulus. It seems counterintuitive that a limit would be freeing, but in my experience it's true. The act of focusing, of narrowing, somehow opens a gate. I recommend Bernadette Mayer's list of writing experiments, which includes stuff like "Write a work consisting only of prepositional phrases" and "Write a work gazing into a mirror without using the pronoun I."


What about when you mess with expectation? When the you embed a long paragraph in the middle of a cluster of short ones:

I smile when he says, That's all right, I'm watching my figure.

I tell him that on my drive to work I pass a church whose sign says, EXPOSURE TO SON MAY PREVENT BURNING.

I ignore the next person in line.

I want him to answer wittily—take a jab at religious hypocrisy, or make up his own and better pun. But he says, Whales' backs burn when they breach because a vitreous oil secreted by their epithelium deflects ultraviolet rays.

I worry that institutional living is infecting him. With non sequiturs.


That's another part of rhythm, though. Short Short Short Long Short. Switching between the two. Using the long sections sparingly. What can you say about that? Is there a danger in the "gravity" of a long section pulling in and demolishing the short sections?

When my sister (a trusted critic) read this story, she didn't like the intrusion of big segments amidst the little ones. It wrecked the symmetry, she said. I saw her point, and also saw the danger of, as you mention, a longer part "yanking down" the shorters. But I was going for variance in the pattern. I didn't want the whole thing to be so tidy. In a list, I'm usually grateful for the item that doesn't fit, because it disrupts expectation in a satisfying way. It's like watching Law and Order and praying that just this once the accused person won't suddenly confess fifty-two minutes in.

Another function of the longer paragraphs is to build a decibel-texture. Quiet-quiet-quiet-LOUDER-quiet. The amplification, in this example, comes from length but also from conflict: the beloved isn't doing what the lover wants him to do.

As for the short segments inscribing action vs. the long one inscribing desire... good eye! That was completely unintentional, but now can I pretend I meant to?


What about quotation marks? You write without them.

I tend to think in, say, a first person story without quotation marks, there is a subtle message: I, your narrator, am telling you what the person I spoke to said. But I refuse to be pinned down. I refuse to be a stenography. I admit that I am uncomfortable quoted someone else and claiming it is entirely accurate. Therefore, I will leave out the quotation mark.

It makes me think the narrator is covering her or his ass.

What about you, though? Are you removing them for speed? To keep the page unadorned?


John Wideman told my MFA workshop he hated quotation marks because they were artificial—they installed a fake boundary. Besides, he said, they didn't look good. I agreed with him about the not looking good, but I remember wondering: isn't everything about fiction artificial? Aren't paragraph breaks synthetic too?

The unadorned page is more visually pleasing, yes. Cleaner. I also tend not to use quote marks because I like the slipperiness their absence makes possible. What happens when you can't tell if someone is thinking a line or saying it? Voicing a desire or choking it down? An interesting energy can arise from that ambiguity.


Finally, what do you think the benefit of controlling a rhythm is? Why be conscious of it?


I've never thought of it in terms of benefit, exactly; it's something I do to please myself, and afterwards I hope a reader will be pleased too. But of course there are benefits. Prose always has some kind of rhythm anyway, and the better we control it, the more nimble the work will be. Paying close attention to rhythm rightly honors the physicality of words—the grain of each vowel or consonant, the feel of a sentence in your mouth. And sense often comes from sound, not the other way around. I like what DeLillo said about this in a 1993 Paris Review interview:

The rhythm of a sentence will accommodate a certain number of syllables. One syllable too many, I look for another word. There's always another word that means nearly the same thing, and if it doesn't then I'll consider altering the meaning of a sentence to keep the rhythm, the syllable beat. I'm completely willing to let language press meaning upon me.

His idea echoes something Woolf wrote in a letter: "Style is a very simple matter; it is all rhythm. Once you get that, you can't use the wrong words."

Matthew Simmons is the Hobart interviews editor. He is also the Man Who Couldn't Blog.