An Interview with Katie Bowler and Matthew Specktor 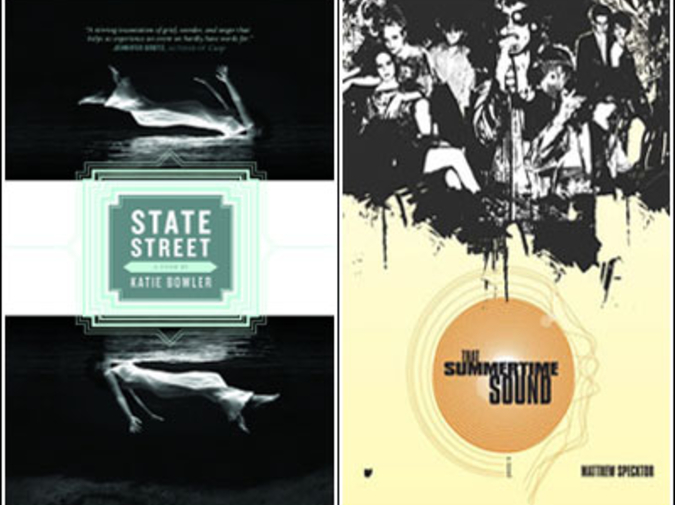 (Editor's note: this month, I asked a former Warren Wilson classmate of mine, Anna Clark, to – in a virtual setting – sit down with two other former classmates on the occasion of the publication of their first books. One, Matthew Specktor, is a novelist. The other, Katie Bowler, is a poet. To many a writer, the first big publication is the dream. We wondered just how the reality compared. – MS)

Anna Clark: Both of you have published your first bookâ€”Katie, poetry with Bull City Press, and Mathew, a novel with MTV Books. How have you navigated the experience? What has surprised you?

Matthew Specktor: I think I'm still navigating. Publishing a book is a real twizzler of disappointment and delight. It's great to hear from readers, when they respond with genuine enthusiasm. I guess what's surprising, in a good way, is how little it actually changes anything. "Poetry makes nothing happen." Fiction, too, apparently, these days. I find that – oddly – liberating. It sends me back to work, where I belong.

Katie Bowler: I agree that it's great to hear from readers. There was also a wonderful moment in which I added my book to my alphabetically organized shelves of poetry. The moment passed quickly though – and sent me back to writing and editing mode to find out what's next. The whole process has also made me marvel over the packaging of music, and how musicians will perform the same songs over and over again, never sounding exactly the same, and then a version of it becomes locked in time in a packaged recording that becomes ours – and that locking is what we take away as "the" version of a song even though we know it's only "a" version of it. As a writer, I wish I could tinker forever with the words, but I also know that an imprint must be handed off if there's going to be a reader.

Specktor: That's true too, isn't it? That old notion that a work is never finished, only abandoned. I do find, when I give readings, I keep adjusting the text. Deleting lines, abridging and so on. I've come to believe that dissatisfaction is a good thing, though. A work's adjustability – its imperfection – is also a sign that it's alive.

Bowler: I'm doing the same thing in each reading – leaving out stanzas, changing a single, isolated word. Even saying a line differently makes it mean something new to me.

That's interesting that you both see reading aloud as ways for your work to live and transform, especially because the stories of both State Street and That Summertime Soundare so invested in audibility: songs, screams, speech, silence, whispers, noise, cities that are embodied in the sounds emanating from them. How do you see the reader's (listener's?) participation in the conversation that your books catalyze? How have you two, as first-time authors, interacted with readers?

Bowler: In State Street, my ultimate goal for the reader, if one can have such, is for the reader to feel like she too experienced the aftermath of Hurricane Katrina – to have a sense of being inside of an experience rather than on the outside and thus viewing it. I've talked with listeners/readers who suggest that they do feel that way. One reader told me that she felt like had "gone through it personally," and that, for me, was the ultimate compliment to the work.

Specktor: One of the curious aspects of That Summertime Sound, for me, is how it's actually aboutinaudibility. The band in the book is largely unheard, and the story enacts/depicts one of the primary paradoxes of reading itself: that books are private spaces we enter towards social ends, or vice versa. The narrator is concerned (not unlike the writer himself) with the question of whether the band he hears makes any kind of sense to other people. My hope is that readers will enjoy this, and respond to the fact this is both a book 'about' music and a book that's...not about music at all. Which, to my delight, they seem to. While I'm ambivalent – very – about social media sites, I like the aspect of interacting more directly with readers and being easy to find. That seems in keeping with both mine and the book's own values. It keeps me incredibly optimistic about writing, even when I'm not always so about publishing.

Katie, the speaker of your poem is "Katie." Like you, she returns to her native New Orleans to salvage the artifacts of cultural history after Hurricane Katrina. Matthew, your narrator is pointedly nameless, and he shares at least some of your experiences of being young, a native Californian, and traveling to Columbus in the 1980s. What do you two have to say about the idea of an authors fist book often being autobiographical?

Specktor: I find the notion of "autobiographical" writing to be a little inaccurate. To some extent, allwriting is autobiographical. It can't help but be, even when you're writing about things that are remote. That said, I tend to find most memoirs/confessionals to be not all that interesting, unless they're obviously fraught with distortion (Stop Time, Anatole Broyard's Kafka Was The Rage), just as I find many novels to be uninteresting unless they're tinged or even violated by the personal. I like slightly hybrid forms and manners. Sebald, early Ondaatje, Salter's Light Years, etc etc. These are all writers and books that aren't nearly autobiographical in the conventional sense, yet retain some primary core of the author's alleged self. I'd hope, in its way, That Summertime Sound belongs to this tradition. The narrator's namelessness isn't just me being coy. It's one way among many the book gestures towards the fact it isn't about me – or my experience – at all; that somehow, that experience isn't even about itself.

Also, why stop at the "autobiographical" first book? Many of the best writers have written several. Roth, of course, has made a career of it.

Bowler: What's interesting to me as a reader of poetry is truth in experience, regardless of whether there is truth in fact for the speaker or author. I want to move through an experience written on paper and know it as though I have been there and experienced it myself, which is why I'm drawn to work by writers whose work moves so genuinely through the human experience – Akhmatova's "Requiem," and the work of Milosz, Levis, Hayden Carruth.

It's unlikely that I could ever extract my own experiences and observations as a human from my work as a writer. It's those experiences – and moving through this world – that provide me with material to write about. I struggle with this question, Anna. Thinking about "autobiography" in my work puts me in a very abstract place: I begin to wonder what "experience" even is, if it's something we have done or something we have observed, something we have heard.

State Street is drawn completely from a real experience after Hurricane Katrina ravaged New Orleans. Does that make it autobiographical? Sure, in that it encapsulates something that happened during a finite time in my own life. Does my writing always do this? No, but it does always have some truth in experience, even if the experience is not my own. And I believe that any writing that's capable of meaning something to someone else does so because it moves past the individual experience and invites others in, regardless of whether it ever happened to the writer.

Kunitz's writing was haunted by his father's suicide, Su Tung-p'o's by exile. These are themes that keep those writers alive to me, and I don't ever look at the work as "autobiography." Instead, I read it and marvel over how I can be so inside of any experience I have not actually had.

I hope I have the opportunity to answer this question again in twenty or thirty years.

What are you working on now? How does it build on your first books – or is it completely different?

Specktor: I am just now finishing a long novel about a talent agency, a story with a much longer arc – it spans about forty years – and a more diverse set of characters. I'd say it's completely different, except of course I see tiny seeds of it, just whispers, scattered around the margins of That Summertime Sound. The narrator in TSS is really concerned with avoiding Los Angeles, both as a place and as a ground for his own being. The new book, rather, embraces Los Angeles on both counts. I think writing – and, I suppose, publishing – That Summertime Sound freed me up to do as much. An analogy, which will probably sound a little grander than it should, would be the leap Bellow made afterThe Victim, to The Adventures of Augie March. This new book feels infinitely looser, wilder and more alive in a way that excites me.

Bowler: The book State Street includes only one long poem, so I'm trying to finish my first full collection of poems, most of which are about the experience and dislocation following Katrina. At this point, I'm editing and arranging the poems – and I'm relatively confident that I've produced the final poem I'll add to the collection. There are a few new poems in the works as well, poems that are going someplace that feels very different – and I'm very excited about that. I'm also working on some fiction.

Bowler: I'm working on a new short story. I have to work very, very hard at fiction, but I like exercising the part of my brain that needs to work to get a story on the page.

And finally, here is your ad-lib opportunity: what else would you like to add?

Specktor: Only that it's a pleasure to have this conversation, and that State Street is amazing. We're all out here – and by 'we' I mean writers, readers, and pretty much anyone with an internet connection – feeling various degrees of overwhelmed-ness and estrangement, and then you pick up a book that matters (like Katie's) and these things...don't 'disappear,' exactly, but recede to their proper place. Wolves at the door, instead of at the dinner table. Thank you, both, for the invitation.

Bowler: That estrangement that Matthew speaks of is an inherent part of being a writer. We create our work in such solitary places. Then we come together – for events and conversations – and I am loosely reminded of what Burroughs called "the third mind," that force at work as a result of collaboration. For me, this often happens in conversation with other writers and artists, when the contemplations that inspire writing become engaged dialogue, helping to spark the next project or poem. I have always enjoyed sitting down to talk with Matthew, whether there's a literal meeting or a long-distance, written dialogue. The lens he brings to those conversations, which he also brings to his writing, leaves me with the impression that I have seen everything a little differently, genuinely, and have been given new images to charge my imagination.

Thank you, Anna, for giving us the opportunity to share the publication of our first books this way. It's been a pleasure.

Anna Clark is a writer who lives in Detroit, Michigan. She has an MFA from Warren Wilson College and works with young writers through the Prison Creative Arts Project and The Imagine Company, a Kenyan literary and media organization. Find her online at Isak.