An Inning at Camden Yards 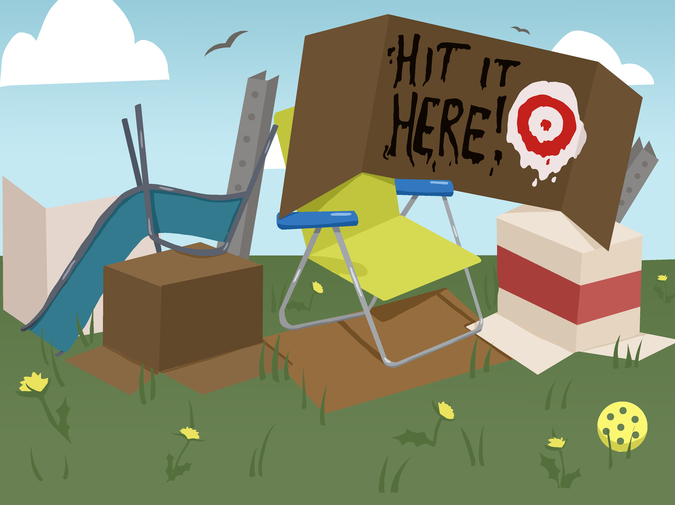 It took me all morning to build the fence.  I used old lawn chairs, cardboard boxes, and rusty sign posts from the dumpster behind 7-Eleven.  I meant for it to look like Camden Yards.  The right field fence was higher–I stacked two lawn chairs.  I scribbled “hit it here” with a bullseye on a big cardboard box, for the lotto sign in right center.  When I finished, I went to get Dad.  He came out and batted first.  It was the yard behind his house, but it was my field, so I was the home team.  He batted with one arm, hacking with the wiffle bat like it was a light saber.  My step mom liked tennis, so Dad started doing more things with one hand.  I threw as hard as I could from a short distance.  Dad struck out twice on six pitches, probably on purpose to get it over with.  But he caught the next pitch.  I tried a curve ball, but it hung bad, just floated like a frisbee.  Dad lifted his front leg and swung the bat up through the flight of the ball.  Wiffle bat on ball.  The plastics smacked loud.  The ball took an awkward route, up and down, left and right, like a one-winged dove.  But it stayed in the air.  If it had landed short of the dirt line, it would’ve been the third out.  But it kept going.  Up and over the “hit it here” sign, way back, deep into the thick woods.  I looked back at Dad. He shrugged, dropped the bat, and picked up his beer from the grass.  I ran into the woods where he’d hit the ball.  I looked in shrubs and branches, under leaves and rocks.  But I couldn’t find it anywhere.  I walked back towards the fence.  When I looked back at home plate, Dad was gone.  Game over.

Peter Tyree Morrison Colwell is a twin from Maryland.  His stories appeared in past issues of Gravel Magazine, Word Riot, and Thrice Fiction Magazine.  He currently lives outside Washington, D.C., with a boxer called Rosie.  Twitter: @semiautobiopete