An Advanced Amateur Reviews Stag – The Steak, Taters, and Gravy of Beer 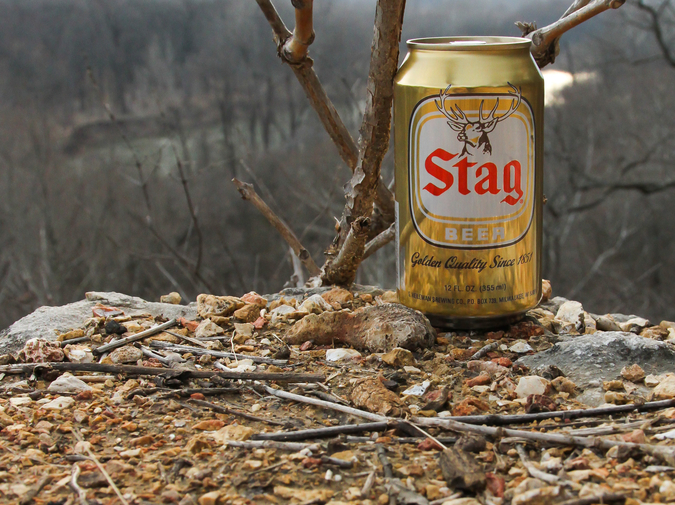 In a roadside gas station along Highway 21, in the Missouri Ozarks, I scan the beer cooler. Less than 100 miles south of St. Louis, AB-InBev products dominate my view. The red and white family-crest of Budweiser. The blue blast and white italics of Bud Light. The snow-topped mountains of Busch. The yellow and green highlights of Bud Light Lime. In the bottom row rests a few outsiders like Natural Light and Keystone.

“Don't pick for too long,” says a friendly fella in a camo ball-cap and beige Carhart jacket. He chuckles, as he bends at the gut to retrieve a twelve pack. “Give yourself a headache.”

I reply with the obligatory chuckle, holding the cooler door open. After he's gone, I copy his selection. A simple yellow-brown box with a mounting plaque pierced by antlers rising from the head of an impressive twelve-point buck—with a torso, not of flesh and fur, but four Gothic letters that sum to a name: Stag.

Little known outside its inner-Midwestern distribution region of southeastern Missouri, southern Illinois, and northern Arkansas, Stag is often referred to as an Ozark beer. This regional attribution is quickly affirmed when driving south from St. Louis along regional highways such as 30, 67, and the infamous 21—Missouri's deadliest highway, ominously known as Blood Alley. Along the way, one will encounter frequent Stag signs, plaques, and posters, and the occasional hulking billboard that declares the beer, “Your Hunting Buddy Since 1851.” It's an endearing, though somewhat dubious, claim that suggests the subsistence hunting of mid-nineteenth century homesteaders was less about surviving in the rough and untamed West and more about toting giant Igloo coolers of punch-tabs through a tipsy, wilderness playground of yet-to-be-filled tags. 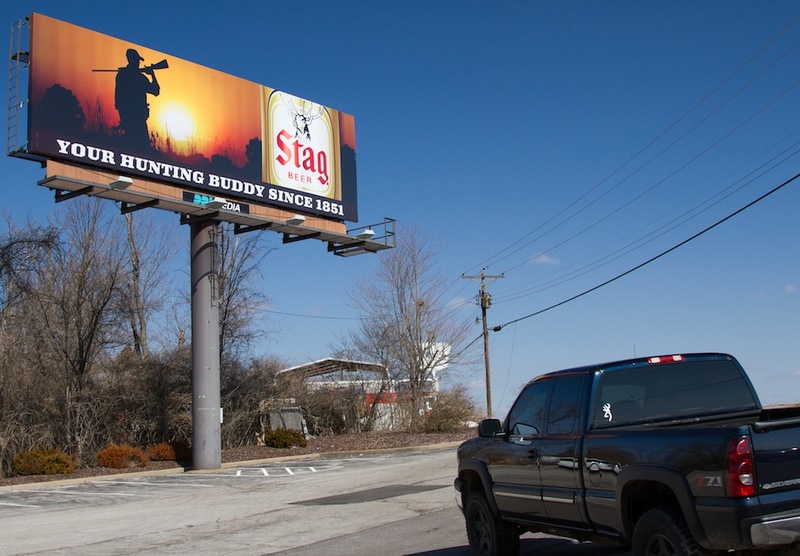 Sharper and less sweet than more familiar American beers like Budweiser, Stag is a light-bodied lager with a crisp finish. The Stag Brewing Company boldly describes its eponymous beer as “brewed and groomed for the independent and self minded...who like a strong man's beer.” As if realizing the somewhat abstract nature of such a statement, Stag offers a slight qualification: “Strong as in determined.” Continuing this cryptic self-examination, Stag recounts “special [brewing] conditions which enhance malt's natural flavors,” to somehow paradoxically arrive at “the simplicity of pure Midwestern grains.” Completing this mysterious recipe with “the zest of hops,” Stag can certainly be called, “common ingredients with an uncommon taste.”

First brewed in Belleville, Illinois in 1851, Stag predates Budweiser by a remarkable twenty-five years. In 1989, following a path worn a decade earlier by TV's intrepid Laverne and Shirley, George Heileman bought and moved Stag to Milwaukee, Wisconsin, where dreams have been known to be made to come true. Today, the Stag Brewing Company is in turn owned by the Pabst Brewing Company and contract-brewed by MillerCoors at their Milwaukee plant. But Stag is anything but a big city beer. One won't find it in the watering holes and dive bars of that great beer metropolis, but instead in the open fields and country saloons hundreds of miles south. In fact, the geographical distance between brewery and consumptive locale leads to a reasonable inference that part of Stag's unique taste comes from some form of in-the-can travel-aging.

My introduction to Stag came in the early aughts with a truck full of raft guides headed for a summer float-trip through Missouri canoe-lands. Amid the brick and glass storefronts of a prototypical Midwestern town square, I first spied the iconic ungulate outline on a yellow sign above a chili restaurant we'd selected for a pre-trip dinner. Inside, over a steaming bowl of spicy, bean-less, “Mexican-style” chili, I'd soothed my flaming tongue with the cool compress of a cold Stag.

For three days, Stag beer was by our sides, as we paddled through riffles and pools, around limestone bends, and under forests of pine and oak. I saw Stags regularly render single hands nearly unusable for those carrying canoes around shallows, for those shimmying up cracks through limestone caves, and for those beaching boats for lunch breaks. Stags were jammed between legs when frantically paddling away from snags. And Stags floated aimlessly downstream next to guffawing paddlers and overturned canoes. Stag became an invaluable commodity when young-uns and parents were out of sight, and the float trip tradition of boobs-for-beer would see bartered Stag cans flying through the air in exchange for fleeting, fleshy visuals. It was a Stag in the hand of one old feller, sitting in a lawn chair on a beach, who at the sight of my approach, relieved himself through his shorts without standing up. Whether it was a defiant lack of bowel control, or some form of pheromone warning system alerting me that he'd claimed the spot, I never found out.

Mirroring the rugged, crumbling hillsides of the oldest mountain range in north America where it frequents, Stag is understandably considered an outdoor beer. Confirmation of this status can be found in the form of crushed, disintegrating cans littered beside Ozark hiking trails, mixed into the trash lines along Ozark irrigation ditches, and dropped in the grassy median strips of Ozark diner parking lots. Stag fosters this rural sensibility through marketing efforts that try to keep pace with other outdoorsmen-targeted beers. For instance, in recent years, Busch has offered hunting-friendly camouflaged beer cans—many of which have been tragically lost in the pre-dawn duff at hunter's feet and now remain scattered across the forests, literally hidden under figuratively thirsty noses. Not to be outdone, nor to over-do, themselves, Stag doesn't offer individually patterned cans, but simply camouflages the entire box of a seasonally-released 24-can case. Obviously, Stag recognizes that a hunter's beer is most vulnerable, not in the field, but when furtively carried from cash register to car.

Stag didn't always occupy such a limited niche. In the 1950s, Stag was a mainstream beverage pushed by a semi-cosmopolitan cartoon spokesman. In a series of persuasive commercials, the nearsighted Mr. Magoo bumbles his way through numerous beer-fueled misadventures. In one, he drunkenly jumps aboard a disembarked riverboat and shares a pint with the conductor. In another, Magoo unwittingly prognosticates the future popularity of slosh ball by picnicking on a baseball diamond during a professional game, presciently shifting the ballplayer's wandering attention to drinking. In a third, Magoo confuses a public library for a bar and demands table service from a mousy librarian, before inexplicably pulling his own beer from his Stag-branded briefcase and insisting a studious patron imbibe with him.

Stag is a simple beer that demands complex description. It is offered in 12-ounce cans and bottles, or in a rare half-quart can that challenges drinkers knowledge of volumetric equivalents. It has been anecdotally described, though not medically endorsed, as the chosen beer of diabetics (due to its low sugar content) and binge-drinkers (due to the alleged guilt-free ability to consume massive quantities without suffering a massive hangover). The peculiar lettering of the Stag name—an old-timey, medieval font with a forward facing g—conveys not the rugged individualism of the Ozarkian outdoorsman, but the Magna-carta-like imagery of King's deers, protected forests, and castle walls. Even the color of Stag's label invites discussion. Is it gold? Is it a shiny light brown? Is it a deep, acrid yellow that resembles the first hazy pee of morning after over-imbibing in the very beer that issues from said label?

Whatever Stag is, it's a beloved beer. This status is plainly apparent, as I continue my drive south on MO-21, winding through the eroded Ozark Mountains, past gas stations and minimarts, taverns and bbq joints, many of which sport the Stag logo in their windows. This region is often called Middle America—even though the actual geographic center of the lower forty-eight lies 500 miles west in Kansas. So, perhaps a better name would be Stag Country. Because Stag isn't just a beer, but a state of mind. A mental meal that is all the liquid food for thought a drinker needs. A beer fondly known around these parts as Steak, Taters, and Gravy.

Advanced Amateur Score: 8 out of 12 points on a buck

To determine if he has expertise in a pursuit, Mike Bezemek often asks himself one of two questions: Am I getting any better at this? Or, am I making any money doing it? Logic follows that he is only an advanced amateur beer drinker and home brewer. His work is featured or forthcoming in publications such as St. Louis Magazine, Canoe & Kayak Magazine, Big Muddy, and elsewhere. To suggest a beer or beer-related subject for a future review, please email him at advancedamateurreviews@gmail.com.