All This Roadmap of Hurt 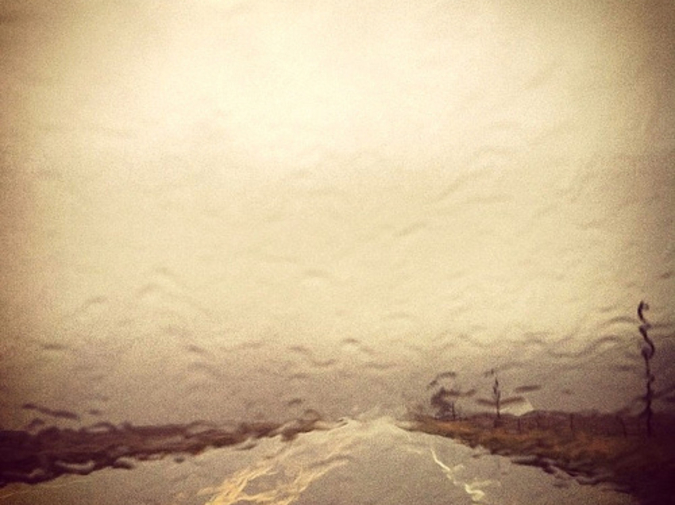 Maria say she gon' tell me the future. She say she know. Mama taught her, but Maria had that gift, not her mama. The real kind. She'd seen all kinds of things 'fore they happen, like her brother shot dead in that parking lot, she'd seen it all four days before it happened.

What you gon' tell me I don't already know? I say.

She sip her drink, she downed it. Let's go somewhere far away, she say. She stroked the inside of my leg, a vibration. Or, maybe let's just go to your place and I tell you all the things I know.

Sugar, baby, I say, sugar, the universe's almost done making it stars. And, she don't know what I mean, so she just kisses me dead on the bull's eye. I read it, I say. We on the way out, no matter how long it takes. We on the way out. The earth, too. All the planets, eventually freezing up. The universe and all its stars, on the way out.

She lean in real close, I smell her pores. She lean in, lips quivering like a scared thing. I can tell you things you ain't thought of, she say. I'll show you, you just going to have to lay back an' watch. She say my knuckles're worn and I say yeah yeah yeah it's all the beatings I give to bigger men. See those scars on my scalp? Skull cracked in during a fight. Didn't even win, just a broken skull. See these scars? I say, pointing here, here, here, rolling up a sleeve, the bottom of m'shirt. See this atlas, all this roadmap of hurt? I say.

I tell you the future and you tell me I ain't special, Maria say. I mighta believed her. Mighta.

I ain't no goddamn good for no one, I say. You do best just'a walk away, real far away.

You might be good for me, Maria say. She don't know. She just want a thing to cling to. The universe's way. Every living thing and even every unliving thing got to find something to be close to. You try'n'a tame me and I just try'n'a run, I say.

They's a fight I was s'posed to lose, but I think'a Maria and all them days past an' her sweet way and the way I just don't want it, the way I don't need it right then, and that made me crazy and I beat this fella bloody, pancaked, all his insides try'n'a get out.

After, Maria, she cleaned my wounds, she pressed alcohol-soaked rags to my skin, wiping away. I say, tell me something tha's gonna come true, something good. Just nothin' about me, I say, nothing about me. She tell me futures ain't never gonna come true for no one, but I liked hearin' 'em.

All my futures're about you, she say, smooth-like, flat and true like a quiet river.

I showed 'er one scar she ain't seen just yet, the cauliflower patch over my heart, the scar I only exposed in the dark, a rare bird I kept in a cage. This one's from inside, I say, this one comes from all the way back, a hurt jus' waitin' to come on since I's born. Double bypass, som'thin' like that, the doctors say. Passed on from m'daddy and his before him. Heart gone soft at 30 and it just breaks. You wanna know heartache? I say and just smile and she don' think it's funny. Once a heart's broken, it don' fix itself, I say.

An', weeks later, they's another fight, this thousand-dollar thing, a fight I can't win, I know, but I always tryin', fightin' against that slow long freezing. Keep up the fight, you never let the heart fizzle out. Keep it pumpin' and it can't lose it's energy, the way I figure it. Can't sustain it, I know, just like the universe, this heart's gon' give eventually, it gonna fall away like the rotten earth.

An' Maria, she say, no no no I ain't gonna let this happen, no way am I goin' to stick around you fight this fight.

Tellin' futures again, I say. I wrap my once-broken knuckles with tape, cover up them reminders of my stupid.

Ain't no prophecy if it's going to come true no matter what, Maria say.

I been fightin' the tame since before I could walk, I say. The wild's in me, I say. How you want to take it out, how you tame an animal, it dies.

An' I fight this jellyroll man, this mass of flesh and bone, an' he landed punches I ain't felt before, like jackhammers in concrete, like atom bombs. An' after th'first round, he grip my shoulder, this moment of tender, he say, man, you going to die out here, you're going to just implode and die if you don't throw in the towel. An' I fight, or try to, try t'keep that heart from slowin', from stoppin' and I swing. For the fences, they say. But, jellyroll man, he landed one punch in the soft of my skull, the once-broken spot, a punch like I-told-you-so. When I woke, wires and tubes hooking me to machines. A note on the hospital table. I told you this future's gonna come true, it say. What good's tellin the future if you can't stop it? I ask my unwrapped knuckles, the wires connected to my heart. The heart monitor beeps beeps beeps beeps

An' Maria, she don't return, not for a bit. An' I stopped fightin'. Not outta want. Outta need to. Outta want for life. I seen older fighters and all they broken-down. An' Maria sent postcards, written on with foretold futures.

I bought this expensive telescope. This thing to see space, to see far out, to maybe see those stars losin' they energy, fizzlin' and dying. Maybe I could see it comin' I looked often enough. I watched every night.

An' one of the postcards say, everything slows down eventually. Can't maintain that go go go forever. You trying to run, but you gonna tire and slow sometime, just like your universe.

An' one day Maria she showed up at my door and I say, what's gonna happen here? Tell me the future, I say.

Maria shake her head, she say, I'm here, now, I'm here. An' I showed her the telescope and we looked for dying stars. For galaxies choking. For the ends of things. But, of course we ain't seen nothin'. Maria say, you can't see any of that from here. You can't. You can't see what's coming. It's too far away.

An' one night Maria put away the telescope. Let's stop trying to tell the future, she say, let's stop trying to spot the slowing down, the burning out. She kissed the cauliflower scar ev'ry night 'fore bed, she asked for my hands to stray all over her, to feel the touch, the warmth of fingers. An' I couldn't fight no longer, couldn't help but for the slowin' down. An' Maria she kept her ear to my heart, her lips, nightly listening for the beat.