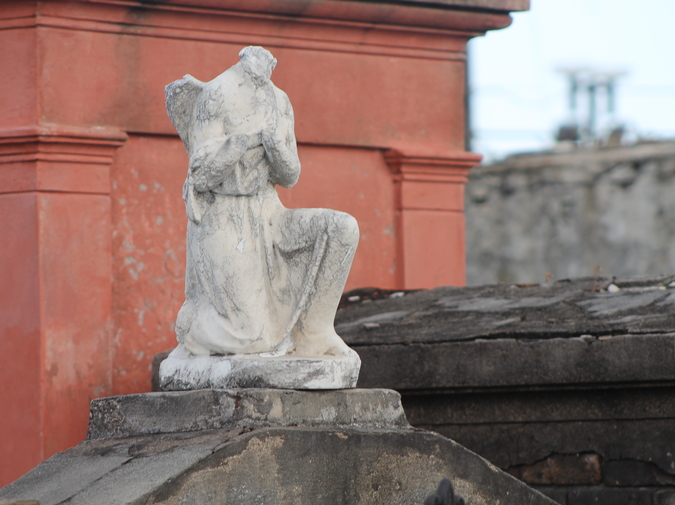 My sister once saw Meryl Streep naked in a public shower. It was back around 1980 and they were somewhere near Virginia Beach. Meryl Streep was already famous, just not yet Meryl Streep. Stacey, my sister, was putting her swimsuit on and Meryl Streep and another woman came in just as Stacey pulled the top of her suit over her head. Stacey said Meryl Streep made definitive eye contact, first with her nipples, then her eyes. Meryl Streep then stripped, enjoying her casual nudity, somehow both lithe and supple, not a trace of shame. Stacey watched as she and her friend helped each other into their swimsuits, not erotically, more like actors backstage readying for a scene. After an ample application of suntan lotion, Meryl Streep's friend looked at Stacey, her swimsuit long on and her boyfriend waiting outside, and asked her how warm the water was in Virginia that time of year. Stacey said, "Real warm," and Meryl Streep said, "Fantastic!" and that was the last time until a nipple flash in Silkwood that Stacey saw Meryl Streep naked.

My mailman has a pink heart surgery scar bifurcating his chest. I see it on hot days, his baby blue unbuttoned, the front walk visible from my side window. Cody is taut and tan, and how a man that fit earned open heart, I don’t know. Back in the 500s, when I could still ride the Go-Go, I'd wait on the porch, Cody the only human contact I’d get all day. “Looking sweet, Mirabelle,” he’d say, or “What’s cookin’, good lookin’?” handing me whatever. I’d watch him walk away, down the street, the whole way back up to his truck. I imagined his hands on me, callused with nimble fingers, so good at sorting, and while I entertained few illusions, I could picture it and still do. It’s the scar that makes it possible, believable, surgery like that for someone so unlikely. I’ve applied a narrative to Cody, a husky kid, a chunky teen, obese adult, heart attack at 26, voilà, the scar. With diet and exercise, he’s a third his peak weight, but he’ll never forget. He’d know me. Empathize. Walk me down his path. I have my sisters give Cody $100 and a bottle of brandy every Christmas. It’s not bribery, but maybe it helps keep him on my route, from ever moving on.

Candace, my other sister, spent a part of her life working as a pornography actress. Nobody in our family knows but me, not even Stacey, and I only know because I recognized her in a movie. We thought Candace was in Kyrgyzstan with the Peace Corps, searching for land mines or something, but really, she was in Stuttgart, building a career and fan base in porn. After two years, Candace returned, told us a couple of stories about little villagers with no legs, but I knew better and told her I knew. I had a tape, one that involved four men and another woman, an obese woman, nothing like me, but enough to imply the connection. I promised I wouldn’t tell our parents, still alive and proud as pumpkins, but only if she told me all about it. Candace denied everything so I scooted toward my door, yelling, “Mom, guess what?” and Candace grabbed my cart, relenting. She made me wait until our parents were at church and even then, whispered everything. It started with dancing, which Candace studied in college, moved to dancing with girls, some photos with men, and then she just was too far in and went all out. She told me about her last movie, set in a soccer stadium, where she’d entertained two teams of guys, all of them lined up to take their turn. That’s when she was done; it was her line and she’d crossed it. In the end, she’d saved $48,000 and somehow was spared any lasting infection. The only detail she refused me concerned the movie I’d seen her in, her with the large lady, and when I pressed, she left the premises. I didn’t see her for two months. When she came for Easter brunch, I handed her an egg I’d dyed purple, her name in white crayon script. That got us talking, but never again about her acting.

My first and only sexual experience to date was, more or less, a tick bath. Last May, some kid threw a rock through the window behind my bed, the one flush against the evergreens, nobody stopping by to fix it for a week. The next morning, I counted five black dots inset in my skin, a dozen more the day after. Candace was coming once a week to play rummy, but by her day, I was more tick than woman, pretty impressive, considering. Candace called Stacey and Stacey arranged for my bather, Zoe, to visit ASAP, chiding me for not calling her right away. “You’re covered in ticks, Maribelle, Jesus.” Zoe arrived soon after. I liked Zoe, and never considered her in any physical way, yet, as she tweezed the ticks, she never flinched, never judged. By bath time, I’d noticed her Cody-tan, how her pony tail and small breasts bobbed in unison, that nothing ever got her down. As she rubbed in antibacterial lotion, I lost my breath, and as she worked my thighs, I felt something inside connect my knees and elbows, not like electricity, not like a seizure, but maybe the illegitimate child of the two. I rotated my head a few inches to the left, let out a tiny sound, like a cat acknowledging a large dog, and pointed my toes off at zero-degree angles. Zoe asked if I was okay and I told her I was happy she’d come on short notice, that I’d make sure my sisters paid her double. She said it wasn’t necessary, that it was her pleasure, but I insisted, “No, no. It was all mine.”

Back when I was still walking, my sisters attempted matchmaking. The first guy was the janitor from Stacey’s gym, a man twice as old as me who didn’t know he was on a blind date. When Stacey brought him inside, he asked what rooms he’d be in charge of and if we had our own rug scrubber. After him came the recently ex-communicated pastor from our parents’ church, also twice as old as me, a trend I would not dignify by emerging from my room. Candace’s accountant was next, and he was the best of the lot, but as it turned out, not always a man, which I didn’t judge him for, though on our first date, he told me not to get attached, as he was changing his mind again. Their final attempt tipped the scales. The whole week leading up to the date, both Stacey and Candace talked a lot about companionship, using that word, “companionship,” like it was the secret word of the day. “What I like about my relationship with Jasper is the companionship,” Stacey said, as if Jasper was a ficus and didn’t look like Kevin Costner in Tin Cup. When this last candidate came to pick me up, I recognized him as the high school band director, the guy who got our pastor ex-communicated. Their companionship angle suddenly made sense, but I declined, anyway. That was eleven years ago, the last thing close to a chance I’ve ever had.

Stacey calls this morning to tell me she's adopting a three-legged monkey. Stacey’s a pediatrician who spends a month each year in the Philippines, working at an orphanage, curing indigent Filipinos of disease. She came across a monkey, she explains, one with three legs, and is working on papers to bring it home, to make it her pet. I can’t decide how many limbs make up a three-legged monkey. Is Stacey counting the front paws as legs, meaning this monkey has three limbs total, one limb lost? Or does she mean this monkey has two front paws and three legs in the back, five total? I want to believe in the five-limbed version, a super-monkey, nature giving it an edge. Can a five-limbed monkey climb trees faster? Open green bananas? Play soccer? Before I can ask, my sister says she’s forgotten to deposit money in my account and will have Candace or Zoe run to the bank, then drop by, maybe play some cards. Stacey says she has to go—malaria is everywhere and these kids are a naked mosquito buffet—and that makes me think of Meryl Streep. I ask, “Stacey, do you remember seeing Meryl Streep undress?" Stacey laughs, says she hasn't in years, not even when she sees Streep films. “I watched Julie & Julia on the plane and her tits never crossed my mind.” I wonder at that, seeing a celebrity naked, full frontal, then forgetting. I wonder if Zoe forgets me. I picture Zoe telling her husband, her friends, describing me, going into detail. I hope she is kind. Stacey says good-bye, but before she hangs up, I use my most definitive voice, pushing deep from my diaphragm, just to let my sister know I am as serious as I can make myself: “Stacey, I want that monkey.”

Michael Czyzniejewski is the author of three collections of stories, Elephants in Our Bedroom (Dzanc Books, 2009), Chicago Stories: 40 Dramatic Fictions (Curbside Splendor, 2012), and the forthcoming I Will Love You For the Rest of My Life: Break-Up Stories (Curbside Splendor, 2015) . He is an assistant professor at Missouri State University, where he edits Moon City Review and serves as Managing Editor for Moon City Press. In 2010, he received a fellowship from the National Endowment for the Arts.